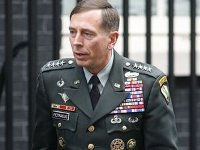 In preparation for a world which may see US Army General David Petraeus (soon to be retired) as Director of the Central Intelligence Agency (CIA), one should be consulting the Irregular Warfare: Countering Irregular Threats, Joint Operating Concept of May 2010. That development of that Joint Operating Concept was overseen by Admiral Eric Olson, USN, Special Operations Commander, USSOCOM, and General James Mattis, USMC, now Commander of Central Command, CENTCOM.

It is important to recall that USSOCOM's Area of Operation is quite literally the entire planet and that they are not wedded to any particular command other than their own.

The findings of that document resulted in the September 2010 Joint Operating Irregular Warfare Directive. That Directive, from then CENTCOM Commander Petraeus, drew directly on the work of Olson and Mattis, of course, and was concerned primarily with organizational matters involving cross-command issues, interagency cooperation, funding, and a host of other items related to clandestine and not so clandestine operations, and support of them. Given CENTCOM's geographic responsibilities, it all made sense.

The work of Olson and Mattis, and the subsequent Petraeus Directive, followed the outlines of the Whole of Government, Whole of Society approach to irregular warfare exemplified by the US State Department's 2009 US Government Interagency Counterinsurgency Guide. That document (cited by Olson and Mattis) was approved by Secretary of Defense Robert Gates, former Secretary of State Condoleezza Rice, and former USAID head Henrietta Fore. Five other departments of the US government were involved to include the Department of Agriculture. The State Department's Bureau of Political-Military Affairs oversaw construction of the guide.

The Whole of Government, Whole of Society approach to today's wars has its modern genesis in dozens of Executive Branch directives too numerous to mention, military lessons forgotten and re-learned in Iraq and Afghanistan, and recycled academic thinking sold as eureka! 21st Century thought. Academia's most notable contribution in this area was the development of non-kinetic coercion--soft power theories. Those would be delivered to the US civilian-military apparatus from Princeton (Petraeus, PhD), Harvard/Yale (Montgomery McFate, PhD, JD), and "lesser" members of the US higher education system.

New organizations have ramped up to implement the Whole of Government, Whole of Society approach to war. For example, the Center for Complex Operations (COO) is now on the scene. COO describes its mission as this: "The CCO will link U.S. Government education and training institutions, including related centers of excellence, lessons learned programs, and academia, to foster unity of effort in stability operations, counterinsurgency, and irregular warfare - collectively called "complex operations." The Department of Defense, with support from the State Department and USAID, established the Center for Complex Operations (CCO) as an innovative interagency partnership. Recognizing that unity of effort across disparate government agencies, and across DOD components, requires shared intellectual and decision-making frameworks, the CCO will connect education and training programs across the government to foster a 'whole of government' understanding, assessment and approach to complex operations."

In short, let's get everyone involved.

There is not an iota of conspiracy in this US government approach to developing Whole of Government, Whole of Society dictums, doctrines, etc. The allegedly super secret Killer Directive signed by Petraeus, and reported by the New York Times, was nothing of the sort. Barring any unusual operational or tactical statements within it like "We operate with Israel in Sudan," it is not hard to figure out what is involved in Foreign Internal Defense Operations; Kill-Capture-Pacify Operations; or Stability Operations. It's a bit of a takeoff on the US Marines Three Block War concept, but these days it's more like the Three Continent War notion.

There is a worry though.

The bottom line is that the Department of Defense is the only institution in the US government that has the funding to make Joint Civil-Military Operations involving Whole of Government, Whole of Society a reality. That is an enormous undertaking requiring the marshalling, integration and deployment of the US instruments of national power, mostly on the quiet.

And that means that military dollars will overshadow and even drive civilian priorities.

It really does not matter who ends up as CIA Director. The CIA has become a subset of the Pentagon, just like the US Department of State. Makes sense, one supposes, to have someone from the US military running the CIA. Perhaps it'll be renamed CIACOM for Petraeus' sake.

As one military commander said to a civilian counterpart, "Vision without Funding is Hallucination." Civilians in the USA are doing a lot of hallucinating these days.

Below are a few excerpts from the Olson, Mattis document quoted directly from the document.

"The joint force should develop frameworks and mechanisms with academia, business and industry, NGOs and other USG agencies to enable the identification and analysis of the appropriate leading indicators that measure the effectiveness of developmental, governance, and security activities in an IW environment.

There are principally five activities or operations that are undertaken in sequence, in parallel, or in blended form in a coherent campaign to address irregular threats: counterterrorism (CT), unconventional warfare (UW), foreign internal defense (FID), counterinsurgency (COIN), and stability operations (SO). In addition to these five core activities, there are a host of key related activities including strategic communications, information operations of all kinds, psychological operations, civil-military operations, and support to law enforcement, intelligence, and counterintelligence operations in which the joint force may engage to counter irregular threats.

In order to maximize the prospect of success, the joint force must understand the population and operating environment, including the complex historical, political, socio-cultural, religious, economic and other causes of violent conflict. The joint force must adopt collaborative frameworks to understand, plan, act, assess, and adapt in concert with U.S. Government (USG) interagency and multinational partners and the host nation. Adequate frameworks for such collaboration do not currently exist in any codified or institutionalized form, although a variety of ad hoc mechanisms have been used and various studies have proposed such frameworks."