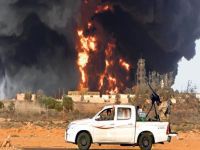 The truth begins to come out of Libya. While the armed forces of Colonel Al-Qathafi fight against the Islamist terrorists with links to Al-Qaeda, NATO is once again slaughtering civilians. Seven children were murdered by a heroic NATO pilot. Bullseye!

Bullseye, Mssrs. Cameron and Sarkozy! Seven children slaughtered by a NATO pilot. Four girls and three boys were blasted to pieces by a NATO bomb near Brega, according to a local doctor, who broke the news. Is this "protecting civilians" and policing a "no-fly zone"?

This, after a hospital and a civilian home were blitzed in Mizdah in western Libya. Several civilians, including an old lady and a baby, were massacred by NATO missiles. This, after 40 civilians were slaughtered in Tripoli, according to the Vatican. How Nicolas Sarkozy and David Cameron can sleep at night after this, defies logic, or else shows what callous, cold characters they must be.

Let the truth be known: CIA operatives, in collusion with a Prime Minister Cameron and President Sarkozy with flagging popularity ratings, eager to play the war card, started the trouble on the Libyan frontiers (why didn't the trouble start in the capital city, Tripoli?) having managed to sweep the regimes in Tunisia and Egypt swiftly aside.

What they did not realise, and it would be even worse if they did, was that the so-called "rebels" have links with Al-Qaeda, as has been admitted by their leader Hakim Al-Hasidi who fought the NATO forces in Afghanistan and arranged fighters from Benghazi in that country and in Iraq.

Instead of bombing civilians and destroying hospitals, why doesn't Mr. Cameron spend more money on his own National Health Service? Given that the cost per hour per aircraft is 40 to 50.000 pounds, would this money not be better spent in building healthcare facilities and not committing war crimes?