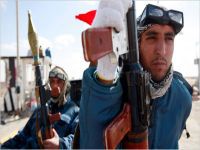 I am pleased to stand with my colleagues today who are outraged at Nobel Peace Laureate President Obama's decision to wage war on Africa in Libya.  At the outset, let me state that Libya is home to tens of thousands or more of foreign students and guest workers.  The students come from Ethiopia, Eritrea, and Somalia.  The messages I have received from concerned Africans state that these young innocent people, inaccurately labeled by the U.S. press as "black mercenaries," have been trapped in hostile territory and are hated by the U.S.-allied Al Qaeda insurgents.  The press forgot that Libya is in Africa and that Libyans are Black!

I would also like to acknowledge the outrage of the Women International Democratic Federation of Brazil that repudiates the invasion of Libya.  They point specifically to the depressed state of women in pre-Qaddafi Libya and how women now have positions that had once been denied to them.  They note in their communiqué that the National Front of the Salvation of Libya has been financed by the C.I.A. since 1981 and that its headquarters is in Washington, D.C.

In fact, I have received messages and phone calls from people literally all over the world who are outraged at this action.   And because the media cannot be relied upon to tell the truth, I repeat the call that I received directly from Libya yesterday for international observers to go to Libya to tell the world the truth.  I would go.

Sadly, President Obama's justification for war provides answers that don't answer, explanations that don't explain, and conclusions that don't conclude.  Reports continue to emerge of the US ties to the so-called rebel leaders:  the latest being that Khalifa Hifter, latest leader of the rebel army, spent much of the past 20 years in Langley, Virginia.  He didn't even move to Baltimore to disguise the relationship!  Moreover, General Wesley Clarke told us that Libya was on the U.W. hitlist ten years ago!

This is nothing new.  This operation smells very much like so many other Africa operations fueled by U.S.-supported individuals who become a rebel force able to threaten an inconvenient leader who stands up to the U.S.  This particular play has been repeated in Sierra Leone, Democratic Republic of Congo, Ivory Coast, and Angola and Mozambique before them.  We are not blind; we recognize this play.  And the use of depleted uranium will cause health effects for generations to come.

Pentagon Secretary Gates said "Libya is not part of our vital interest."  Then why are we there?  Herein lies the conundrum.  President Obama has authorized secret support for its rebels in Libya, just like Miami's Cuban community has received for decades.

Sadly, our President has chosen to spend $600 million per week in addition to other war costs at a time when the Black community is melting.  As of the most recent Economic Policy Institute study, average Black family wealth was $2,000 while that of Whites was $94,600.  President Obama has done nothing to address the disparities that have existed in this country since slavery.  Clearly, our President should focus on home and improving the lot of the people of this country before launching another war.

Finally, I must say something about the ugly hate language that is emanating more and more from Black political voices.  Any politician seeking votes by exacerbating divisions in our country does not deserve our votes.  I'm speaking specifically about the unfortunate remarks of Herman Cain who should know better.I stand with those who support the right of self-determination of the Libyan people, including their right to resolve differences without interference from outsiders.

Pictured:  civilians protected by NATO and the coalition of cowards