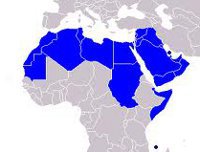 The UN Security Council Resolution 1973 adopted on March 17, 2011 to establish a "no-fly zone" over Libya (with the support of only 5 Western countries and 5 of their allies in the council, while the world has 203 sovereign states, as of 2011) reveals something deeply troubling about the Middle East in our time, as it has to do with two closely related phenomena, namely, Arab post-colonial incompetence and Western neo-colonial imperialism, as two sides of the same coin.

On the one hand, in regard to Arab post-colonial incompetence, the end of the Age of European colonization in the Middle East has brought neither widespread freedom nor far-reaching prosperity for many folks in the region. There can be many evidences, of course. Consider, for illustration, four of them below.

Firstly, many Arab states in the post-colonial era have long subjected their own peoples to different degrees of oppression. The different unrests as they have unfolded recently in Yemen, Bahrain, Egypt, Jordan, Saudi Arabia, Syria, Libya, Tunisia, and others speak volumes of this.

Secondly, many Arab states in the post-colonial era have long fought among themselves, instead of being united for regional development. Muammar Qaddafi of Libya, for instance, sent in 2004 "a hit squad to assassinate then Crown Prince Abdullah of Saudi Arabia," just as he also quarreled with Qatar over Al Jazeera, "the region's most popular satellite news channel," which is owned by an "immensely rich Qatari royal family," as reported in the March 24th issue of The Economist. Other good examples include the numerous conflicts (e.g., Iraq vs. Kuwait, Iraq vs. Iran, Syria vs. Lebanon, Saudi Arabia vs. Iran, the Hamas vs. the Fatah in Palestine -- and of course, the Arab disagreement over Israel).

Thirdly, many Arab states in the post-colonial era have long associated with Western powers which care about the oil resources and the strategic usefulness of the region -- rather than about the well-being of ordinary Arabs. For instance, the tyrannical reign of Hosni Mubarak in Egypt had been supported by the U.S. for more than 30 years for American own interests (e.g., Suez Canal, energy resources, and a safe buffer zone for Israel). During his reign, the brutality of the Egyptian security forces was widely feared, especially after Mubarak imposed "the emergency law" in 1981. Besides, Mubarak himself had collected a vast fortune estimated "between $40 billion and $70 billion" from his country's coffers, much of which were deposited in American, British, Swiss, and other banks, besides owning luxurious mansions in New York, London, Beverly Hills, and so on, as reported in the February 11th issue of U.S. News. By comparison, Mexican business magnate Carlos Slim, known as "the world's richest man" is worth only "about $54 billion" in 2011.

And fourthly, many Arab states in the post-colonial era have long used their oil resources for the luxurious comfort of the elites and for the endless military spending sprees (which have much benefited Western military suppliers over the years, especially in regard to the American, British, and French armed sales to the region). Saudi Arabia, for instance, in spite of its enviable vast oil revenues over the years, has never been able to transform itself into a major industrial power -- while Hong Kong, a tiny territory with no major resources at all in East Asia, has long enjoyed the envy of the world for its "economic miracle." These are some of the bad consequences of the so-called "Dutch disease" (or the "oil curse").

These four evidences of Arab post-colonial incompetence are by no means complete (or exhaustive), but solely illustrative enough to show us how much it has messed up. But then, this brings us to the other side of the same coin, namely, Western neo-colonial imperialism in the region.

Although the Age of European Colonization was long gone, the legacy of imperialism is still alive and well, with a neo-colonial character (that is, the pursuit of domination, exploitation, and oppression without maintaining an explicit colony as in the older days of European colonization). Western powers (especially the U.S., with smaller ones like the U.K., France, Italy, and others -- including Israel in the region) have long exploited Arab post-colonial incompetence for their own benefits. Consider, for illustration, five major evidences below.

Firstly, Western neo-colonial powers have long supported dictators in the Middle East, while publicly preaching "freedom," "human rights," "democracy," and the like to cover up their imperialist deeds. All of the countries in the Middle East where there have been unrests in the last few months, with only a few exceptions, have long been "Western allies," often with the presence of Western military forces stationed in them. It is no wonder that the U.S. currently has the most to worry about, as its military presence is in almost all of them, and a good example is Bahrain, which is "the home base of America's Fifth Fleet," as reported in the March 24th issue of The Economist. And the weapons which have been used to stop and kill anti-government protesters are supplied by Western powers over the years -- as in Libya, Yemen, Saudi Arabia, Bahrain, Jordan, and the like.

Secondly, Western neo-colonial powers have long singled out those countries which are not pro-Western enough for retaliatory actions to expand their imperialist reach. Take the case of the "no-fly zone" in Libya. Why Libya - not Yemen, Saudi Arabia, Bahrain, and Jordan? The governments in all these countries have killed anti-government protestors. But Libya is singled out, because it is not pro-Western in many ways, while the other countries are "Western allies" to serve Western interests. After all, the U.S. under Ronald Reagan had already bombed Libya once a few decades ago. This time, Western neo-colonial powers are determined to remove Qaddafi, with the official excuse of "protecting civilian lives" (for propaganda), while in fact Western military strikes have only ended up killing more innocent civilians and devastating the country in the long run.

Thirdly, Western neo-colonial powers have long manipulated (or abused) international institutions for their imperialist expansion. Consider the case of UN Resolution 1973, which is to establish a "no-fly zone," but not more than that. Yet, as soon as the resolution was passed (with the support of only 5 Western countries and 5 of their allies in a world of 203 sovereign states), Western neo-colonial powers quickly started "bombing" Libya, including the tanks on the ground and even a presidential palace, even though Libya officially announced that it was to comply with the "no-fly zone." China, for instance, did not waste time to immediately "blast...the UN-backed military strikes on Libya, saying they masked a self-interested grab by Western powers for oil and 'world dominance.' The air assault 'is primarily a political decision taken by a few Western powers, and the very first message it delivers is that these Western powers are still the judge and executioner on a global level,'" as reported on the March 23rd issue of Space War online. In other words, the bombings were not authorized by the UN Security Council Resolution 1973, and Prime Minister Vladimir Putin of Russia had also criticized the military strikes by Western powers when he bluntly said on March 21st: "The resolution is defective and flawed....It resembles medieval calls for crusades."

Fourthly, Western neo-colonial powers have long allowed their domestic (sometimes personal) politics to fuel their imperialist intervention abroad. In the case of Libya, the strong support by French president Nicolas Sarkozy has its domestic (and personal) politics as a motivational force. The first reason is that Sarkozy is arousing French nationalism for his re-election campaign. And the second reason is that many people do not know that Sarkozy himself is of Jewish origin, and his foreign minister Bernard Kouchner is also of Jewish origin, as both of them have been a major supporter of Israel's foreign policy against Iran, Libya, and others. Some years ago, Kouchner even advocated the use of force, if necessary, to stop Iran from pursuing its nuclear program (while defending Israel the right to possess nuclear weapons). And now Sarkozy defends the use of force against Libya.

And fifthly, Western neo-colonial powers have long exploited the leaders in those countries where they dominate as long as these leaders remain useful, but when time comes for a change which the neo-colonial powers cannot control, they simply abandon these leaders and start supporting the new forces (if they can control them). For instance, the U.S. has a long history of supporting dictators everywhere, and when the dictators fall, the U.S. simply abandon them for the new forces (if they can control them), so the imperialist cycle continues. It is no wonder that the "autocratic leaders" of Saudi Arabia "have been shocked by the fall of Mr. Mubarak, a staunch ally, and infuriated by what they see as Western complicity" to abandon him at the last moment (when his fall was deemed as inevitable), as reported in the March 24th issue of The Economist. Empires have no mercy to those leaders in weaker countries whom they exploit, as long as they remain useful, since the empires will readily abandon them when time comes.

Some innocent folks may be tempted to naively assume that Western neo-colonial imperialism is now no longer possible in the Middle East, because of the new wave of democratic fever currently unfolding. Think twice, or thrice. The situation in Libya shows all the more that Western neo-colonial powers now find a new door wide open for them to enter, divide, and conquer.

This continued pursuit of the imperialist dream is true, not just among many leaders of Western neo-colonial powers, but also among many of the ordinary folks in these powers. For instance, in a Reuters/Ipsos poll (conducted on March 22), "60 percent of Americans support the United States and its allies bombing Libya" and "seventy-nine percent of those surveyed said the United States and its allies should try to remove Gaddafi," as reported in a March 24th article on the Yahoo! News website.

In the end, Arab post-colonial incompetence is still alive and well, so is Western neo-colonial imperialism in the Middle East (and, for that matter, in other parts of the world).