An Open Letter to Colonel Ghaddafi 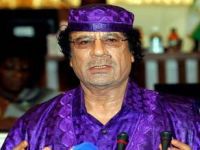 As you boldly and bravely stand in this time of trial, know that you are supported by people all over the globe. No matter how this terrible travesty turns out, I believe that both within your country and without, you have seen the genuine appreciation of people who recognise the good things you have done.

Rare is the leader who, with the tremendous advantages of power, uses that power to bring good to others as you have done.

Globalist imperialist corporatism and fascism has brought this evil upon you and your country. There have been shocking displays of cowardice and greed that stood by and allowed this to happen.

As a citizen of the world, I am outraged. I am furious. We are looking into the face of true evil when we observe what they are currently trying to do to Libya. Breaking "news" messages now make one cringe in anticipation of what horror they may have visited upon your country.

More and more eyes have been opened by this blatant, shameless display of lies and brute force. And one thing is clear, during the last world war at least those who committed those acts of brute force were truthful about their intentions and not pretentious moralisers.

Your country went from the poorest in the world when you took power, to the one with the best standard of living in Africa. Your citizens enjoy free health care, education, housing, interest free loans, free land for those who want to pursue farming.

You undertook a huge, expensive and bold project to extract water from underneath the desert and transport it for the use of your citizens and now they want to steal it from you. I wonder who is always crying about needing water?

In terms of Human Development Indices today and income/standard of living, your country is the most prosperous in the continent. You have been the voice of the Pan-African movement.

How dare anyone accuse you of stealing from your people.

People in Africa are not supposed to live as well as they do in Libya. The empire wants to be sure to keep those in the under developed world just where they are and so they have decided to return your country back to the stone age, the status it was in before you changed things.

The empire was utterly shocked at the support you have from your people. They were enraged that you were able to rally the support needed to turn back the terrorist effort to destabilise your country and that their efforts had failed.

Humanity and decency demand that you prevail. Basic human decency is horrified, enraged and repulsed by big, strong bully countries attacking weaker ones. Your victory will be the victory of humanity. The strong must not be able to rob from those who are weaker. This horror must end now.

As a great leader, this worldwide revolution ready to arise can use your leadership.