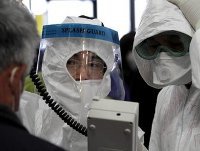 Since March 12, a potentially unprecedented catastrophe has been unfolding in Japan, despite official denials and corroborating media reports - managed, not real news. Believe none of them. Nonetheless, on March 15, Reuters suggested what's ongoing, headlining: "Japan braces for potential radiation catastrophe," saying:

France's Nuclear Safety Authority rated the disaster a six on the international seven-point nuclear accident scale. Clearly, it's the worst ever. Europe's energy commissioner, Guenther Oettinger called it an "apocalypse," telling the European Parliament that Toyko lost control of events.

Independent experts agree. It's an unprecedented disaster spreading globally. All six Fukushima reactors are crippled, four of them spewing unknown amounts of radiation.

On March 15, city officials said levels were 20 times above normal, later stating they'd dropped, downplaying the risk. Government authorities also claimed Fukushima levels were falling. For residents throughout the country, believing them is hazardous to their health, given the gravity of the situation, likely deteriorating, not improving.

According to Hokkaido University Professor Koji Yamazaki, "Radioactive material will reach Tokyo but it is not harmful to human bodies because it will be dissipated by the time it gets" there.

False! Any amount of radiation is harmful. Moreover, it's cumulative, causing cancer if one human gene is affected. Depending on the type and amount, it damages chromosomes and DNA. In her landmark book, "Nuclear Madness," Helen Caldicott said:

"Lower doses of radiation can cause abnormalities of the immune system and can also cause leukemia five to ten years after exposure; (other) cancer(s), twelve to sixty years later; and genetic diseases and congenital anomalies in future generations."

Moreover, "nuclear radiation is forever," says Caldicott. It doesn't dissipate or disappear. Downplaying its danger is hypocritical and outrageous. For a scientist like Yamazaki, it's scandalous.

In 1953, Nobel laureate George Wald told students (including this writer) that "no amount of radiation is safe," explaining that "Every dose is an overdose."

Radiation is unforgiving. Exposure to elevated levels for short periods is harmful. If longer, cancer and other potentially fatal illnesses may develop. It's why using nuclear reactors to generate power is irresponsible, in fact, crazy.

Fukushima's operator Toyko Electric Power (TEPCO), a notorious industry scofflaw, "expressed extreme concern that (they) were close to losing control over the fuel melting that has been ongoing in three (Daiichi) reactors...." After Unit 2 exploded, "pressure had dropped in the 'suppression pool" - a section at the bottom of the reactor that converts steam to water and is part of the critical function of keeping the nuclear fuel protected."

"We are on the brink. We are now facing the worst-case scenario. We can assume that the containment vessel at Reactor No. 2 is already breached. If there is heavy melting inside the reactor, large amounts of radiation will most definitely be released."

Moreover, a plant official said breaching would make it hard to impossible to maintain emergency seawater cooling for an extended period, and if workers are evacuated, "nuclear fuel in all three reactors (will likely) melt down," causing "wholesale releases of radioactive material...."

Further, already over 200 magnitude five or greater aftershocks have occurred, and authorities warned of a 70% chance of a magnitude seven or greater one in days, perhaps making a bad situation much worse. In addition, chief cabinet secretary Yukido Edano said previous radioactivity levels were misreported in microsieverts instead of millisieverts - 1,000 times stronger. Earlier he said the situation isn't similar to Chernobyl. In fact, potentially it's far graver, unprecedented.

Nuclear experts also explained that even without a full meltdown (perhaps ongoing), today's emergency will last a year or longer because of problems cooling the affected cores. As a result, long-term evacuations will be necessary. Already, nearly 500,000 people are affected, a total likely to grow, besides vast destruction, spreading contamination, growing threat to human health, and tens of thousands still missing, by now presumed dead, though not reported.

After more explosions and risk of one or more full meltdowns (perhaps ongoing though unreported), "(t)he nuclear reactor situation in Japan had deteriorated significantly." Even Japan's Nuclear Industrial Safety Agency (NISA) said Fukushima's No. 2 reactor radiation level rose 163-fold in three hours. At No. 3, it was 400-fold.

Reports "suggest a dramatic worsening as well as a wider spread than at any time since the emergency began." All Japan and the Pacific rim are threatened. "The situation at the (affected) facility is uncertain, but clearly deteriorating." How gravely, the fullness of time will determine.

Coolant loss causes hydrogen gas eruptions "because of a highly volatile substance called zirconium," chosen "in the 1940's and 50's" to build nuclear plants, "as the material (for) rods into which radioactive fuel would be loaded."

Each plant has "30,000 to 40,000 rods - composed of twenty tones of zirconium." It alone works well, allowing "neutrons from the fuel pellets in the rods to pass freely between the rods and thus a nuclear chain reaction to be sustained."

But not without "a huge problem...." Zirconium "is highly volatile and when hot will explode spontaneously upon contact with air, water or steam." With tons used in nuclear plants, in "a compound called 'zircaloy,' it "clads tens of thousands of fuel rods."

Any interruption of coolant builds quickly. However, because of zirconium's explosive power, the equivalent of nitroglycerine, it catches fire and explodes "at a temperature of 2,000 degrees Fahrenheit, well below the 5,000 degree temperature of a meltdown."

Before it happens, it can cause hydrogen explosions "by drawing oxygen from water and steam letting it off," what happened at Fukushima. They, in turn, create more heat, "bringing the zirconium itself closer and closer to its explosive level," what may, in fact, have happened, perhaps bad enough to cause a full meltdown.

Using tons of explosive material like zirconium is "absolutely crazy." Doing it makes every nuclear plant a ticking time bomb, vulnerable to explode, spewing lethal poisons into the atmosphere.