Growing demand, falling production, a market based upon speculation. Global food prices have increased for the 8th consecutive month. Most commodity groups have risen. The ones who are going to pay the invoice are the world's poor, as per the humanitarian catastrophe looming in Somalia. The world can no longer feed itself under this model. 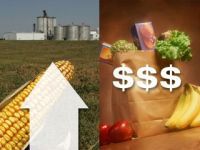 Those who implemented this economic model, based not upon stable and staple elements but rather upon speculative and inflationary pressures, often resulting more from caprices and whims than the chain of supply and demand which is supposed to underlie the market economy, should crawl into the annals of history through the lowest possible passage.

That a system that rewards investment in speculative concepts for the bolder members of society creates wealth and income, no problem for those who wish to gamble. Yet that a system which turns the entire macro-economic mechanism into a huge bet, devoid of any fundamentals, in which the real life consequences are tangible and dramatic not for the speculators but for the public at large, wholly and totally unacceptable it is.

The other side of the coin was the "capitalist" model, favoured by the West, which in its basic form defended the right of individuals to set up a business, a society of shopkeepers, free to trade, free to employ, free to contribute to the common wealth.

Two excellent ideas. The first worked very well, and brought a huge number of countries up from medieval socio-economic levels to the front line of development in a few generations, managed to internationalise itself and free countless millions from the yolk of imperialism and guaranteed global rights in terms of gender equality, human rights, workers' rights, rights to a universal education, and much more.

The second also worked well for a period of time, creating development through competition, in societies where there was a social or later, a welfare network, to pick up the pieces where needed and as time progressed, created something near to full employment as a welfare system coexisted with a workfare ethic in societies where the etarian pyramid was broad based.

The second system also spent trillions in sabotaging the first, due to the fact that those who controlled the means of production, and wealth, did not see with good eyes the distribution of the same among the many - while the planned economies' centralised ideas failed to introduce elements into the socio-economic fabric which walked hand-in-hand with the human nature to compete. The victim was quality control, or an absence of it.

Therefore the planned economies, their objectives reached not in part, but in totality, morphed for a time at the beginning of the 1990s into the market model. And what an utter disaster it has proved to be.

It is a globalised economy based upon airy-fairy ideas fuelled by anonymous elements working in gray entities, trading future values of complex toxic sets of products, which few if anyone really understands, and worse, it is based upon insurance and re-insurance policies guaranteeing such pie-in-the-sky notions of assets, and the trading of the same in ever-more manic portfolios which common sense tells us are bound to collapse.

And they do. But when they collapse, then carry all with them like a capitalist, market-oriented economic tsunami of failure. And boy, is it impressive.

Today our wonderful globalised economy has managed to tie in the food we eat into this speculative bubble economy for gamblers, in which the price a family pays for a square meal on the dinner table has nothing whatsoever to do with the supply and demand chain, but rather with speculative pressures due to NATO's adventures which in turn inflate the price of oil, and everything else.

Therefore today's food markets are intrinsically linked to today's oil markets, and are intrinsically linked to other vectors forcing up prices, namely a globalised economy ruled by a World Trade Organization which preaches free trade but in practice allows the ruling elite to impose a policy of tariffs and subsidies. The victim is the small producer who cannot compete with the mega-means of production nurtured and bred by systems whose notions of free trade pass by control mechanisms and nothing else.

Worse, those who foot the bill are the world's increasing number of poor people, who have no other option but to buy from those who sell, meaning those who control the sales prices.

Under this system, it is not a question of not producing enough food to eat - it is far worse: we have created mechanisms which exclude countless and growing millions from the right to eat, to work and to live. This system does not work.