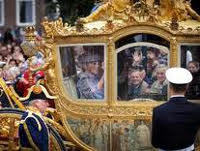 So you thought the Netherlands was a democratic country? You thought human rights were being respected in that little Kingdom by the North Sea? You got it all wrong there. Don't you believe the Netherlands is a friendly constitutional monarchy with happy, loyal subjects tending their tulip fields and polishing their wooden shoes! Beatrix von Amsberg, the present queen, rules her realm like a medieval fiefdom, with an iron fist. Of course, there is a constitution, but in actual practice its lofty principles are not enforced.

Abroad, Beatrix von Amsberg is best known as the president of the Bilderberg group, one of the secret organizations trying to change the world by imposing a New World Order. Actually, Mrs. Von Amsberg is the only Bilderberg member who is at the same time the leader of a sovereign nation. She has been in office ('on the throne') since 1980.

Today, government-sponsored polls report a mere 50% approval rate, indicating that most Dutch nationals nowadays would like to see the monarchy abolished. If at the moment of her accession, Beatrix may have enjoyed a modicum of popularity, in the course of her 40-year reign she has thus lost the support of the majority of her subjects. Like all autocrats and dictators, Beatrix's reaction to the dwindling support has been vindictive and vicious.

On September 21, 2010, as she was riding in her gold-plated state coach on her way to the opening of the parliamentary year Mr. Erwin Lensink (29) threw a small crystal candle-holder, hitting the coach. The object was too small to do any damage, since under its shining golden surface the coach is heavily armored. Mr. Lensink was immediately worked to the ground by a dozen police officers, handcuffed and thrown in jail.

This is the way both democracies and dictatorships deal with those who vent their anger at the system. But from there on, democracies usually treat their prisoners with some human dignity. Dictatorships subject them to unusual and cruel punishment, even torture. You might therefore have expected the Dutch to give Mr. Lensink a decent treatment. Unfortunately, this is not the case.

Charged with assault and attempted assassination, Mr. Lensink has been waiting more than five months in the country's top maximum security prison for his trial to begin. The date has now been set for March 15. Meanwhile, anytime Mr. Lensink has complained about the treatment he was receiving, he was put in isolated confinement. Under both Dutch law and the Universal Declaration of Human Rights, it is prohibited to keep defendants locked up for an unreasonably long period of time while they are awaiting trial.

The charges are outrageous and preposterous. There is no way Mr. Lensink could have posed a danger to the lives of either Beatrix or her son and daughter-in-law who were with her in the gold-plated coach. Even so, Mr. Lensink is facing a multi-year jail sentence. The trial will decidedly NOT be a fair one: both judges (appointed by the queen) and lawyers are required to swear an oath of allegiance to the queen. You can imagine the defendant's chances in a legal system that is so heavily weighted against him.

Moreover, Mr. Lensink constitutes a special case. The nature of his grudges against the so-called royal family must be extremely worrisome to the queen, since he claims she is a usurper. In fact, he contends that Beatrix holds no legal claim to the throne because she does not descend from the last king of the House of Orange, William III, who died in 1890. Suffering from a serious case of syphilis, it is extremely unlikely King William could have fathered a daughter (Wilhelmina, Beatrix's grandmother) in the same year he died. Nor is Beatrix the first daughter of her Mother, Queen Juliana. Wilhelmina allowed her own husband, German Prince Heinrich of Mecklenburg, to systematically rape their daughter. Thus at 18 years of age, Juliana gave birth to a daughter, who was discreetly whisked off to the confines of a monastery far removed from the royal palace. (There exists a wealth of evidence on this sad episode).

Actually, it is this first-born illegitimate daughter, born of an incestuous relationship, and not Beatrix that should have become queen after Juliana stepped back in 1980. Mr. Lensink has repeatedly requested queen Beatrix undergo a DNA-test. You may guess what has been the answer.

As if the charges of illegitimacy weren't enough, Mr. Lensink also contends his grandfather was sacrificed in order to help queen Wilhelmina escape to England when the Nazis attacked the Netherlands in 1940. At the very same time the Dutch army was putting up a fierce and desperate resistance against the vastly superior German army, Beatrix's grandmother Wilhelmina fled to England on a warship, taking with her all the gold from the National Bank. Meanwhile hundreds of valiant Dutch soldiers, having been led to believe they were fighting for queen and country, were giving their lives for a lost cause.

In conclusion, Beatrix the Bilderberger has sound reasons to regard Mr. Lensink as a very dangerous man. His actions and contentions are a threat to the survival of the monarchy. Therefore, she had him locked up in her own version of the Bastille, the Vught Maximum Security Prison.

Would you consider Mr. Lensink a political prisoner? I certainly would.