International law has taken three body blows in the last decade: Serbia, Iraq and now Libya, where foreign interference is patently obvious, where the entire anti-Gathafi campaign is orchestrated from abroad, manipulated by the media and controlled by elements who have been trying to assassinate the Libyan leader for decades. 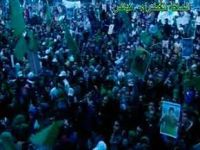 For a start, not all Libyans are against Colonel Gathafi, which is patently obvious in Tripoli and probably in other areas, where they dare not show their heads among marauding crowds of thugs, terrorists and vandals who have taken the streets, the darlings of an anti-Gadhafi international media which appears to support acts of terrorism and public disorder.

What is at stake here is not the alleged reaction by the authorities against what is to all intents and purposes an armed uprising, yet given the track record of the anti-Gathafi forces, any reaction is hardly surprising, right or wrong. What is at stake here is respect for international law, which upholds the right of all countries to apply their Constitution in their own territory. This includes, as in the USA, the right to impose the death penalty.

Under normal circumstances, this would be applied after due legal process consisting of a charge, the right to defence, a trial, a judgement and the right to appeal. But how is this possible in a war scenario? When gangs of heavily armed protesters are ransacking Government property, committing arson, acts of terrorism and murdering people, what are the authorities supposed to do, stand back with their hands over their hearts and sing God Bless America?

And exactly who are these "rebels"? Are they not led by those forces trained by the US military in the United States of America, representatives of the armed faction of the National Front for the Salvation of Libya, flown in to Egypt and Tunisia to then infiltrate across the Libyan borders? Is this kind of subversion legal, or is it an act of state-sponsored terrorism?

This anti-Gathafi group, sponsored and trained in terrorist activities by the CIA and Israelis and financed in part by Saudi Arabia for decades, has tried it before, several times. For instance back in May 1984 when fifteen terrorists from this group attempted to murder the Colonel in his residence after slipping across the Sudanese border. This National Liberation Army has been gravitating around Libya's borders since the 1980s.

They have tried to foster rebellion in Libya time and time again. These covert operations are difficult to classify for purposes of accountability and jurisdiction, however this does not mean they are legal. An act of terrorism is an act of terrorism, yet in our world today the label changes according to who is propagating the message. 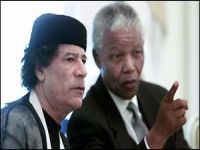 And right now the international mainstream (bought) media is orchestrating a campaign to remove Muammar Al-Gathafi from power. The demonology is clear to see: references to "Gaddafy", "dictator", "murderer", reference to "protesters". Does a "protester" sport a machine gun?

Whether or not Muammar Al-Gathafi remains as the leader of the Libyan people is a decision that belongs to the people of Libya, not a few thousand mercenaries recruited from abroad to serve the Great Plan which has existed in Washington/Tel Aviv for over a decade, namely the control of "Iraq, and then Syria, Lebanon, Libya, Somalia, Sudan and, finishing off, Iran." These are not my words. They are the words of General Wesley Clark in an interview with DemocracyNow!, March 2, 2007*.

Does this put the Libyan "uprising" in context? No? Then how about the news that the US State Department is at this moment speaking to separatist opposition groups in Eastern Libya?