Economists are paid for what?

Where are the world's economists? And what are they paid for? They are trained to produce viable ideas for the implementation of workable systems which cater for new realities. Now that the planned economic system has virtually disappeared, and the market economy is so obviously a failure, where are these gurus, masterminds of tomorrow's new economic system? 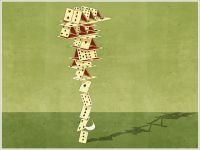 Rising from the ashes, implementing systems where there used to be nothing, was the Socialist/Communist model which provided universal, excellent and free education, healthcare services, free dental treatment, free public transportation, free or heavily subsidised public utilities, free or subsidised leisure/cultural activities, guaranteed free housing for all, guaranteed a job in a society of zero unemployment, social mobility and security on the streets.

Against this system worked the so-called Capitalist world, for decades, complete with its assassination attempts, murders, sabotage, terrorist attacks and endemic unemployment, total insecurity on the streets where marauding gangs of drug addicts and alcoholics trash city centers and kick old ladies to the ground for fun...the society and model which has already attacked and destroyed free universal education and healthcare, turning them into businesses, and in which life is a drama from the word go.

While the former system found itself at a crossroads after all of its main objectives had been reached and achieved, and after it had freed countless millions of peoples from the yolk of imperialism and installed socially progressive governments for them, the latter has simply failed to provide for these countries what they hoped to achieve when they decided to try something different...This is hardly surprising since the Capitalist system never had its own house set in order to begin with.

Now, welcome to the wonderful world which belongs to the large corporations and the banks, the owners of Capital, as Marx always claimed, and as the followers of the Socialist model had said all along. Welcome to the wonderful world of high and increasing food prices, one in which, experts claim, there will soon not be enough food to go round and in which families are set to spend ever-increasing budgets on basic necessities.

Welcome to the wonderful world of endemic unemployment, in which a "good" scenario is "only" an unemployment rate of 4% (wow!), one in which a growing number of cliques have been formed to cater for the whims of a growing number of elitist good-for-nothings whose connections see them gain lucrative sinecures in some Commission or Committee or other, welcome to the world in which international law simply does not exist (as per Kosovo and the US veto against a text condemning Israel's illegal activities).

Welcome to the world in which all we had fought for - workers' rights, children's rights, women's rights, universal education and healthcare - has been chipped away at and whose very essence is threatened. Countries that had a decent school system now have none. Countries where women's rights were guaranteed (Afghanistan and Iraq, for instance) have repressive regimes where women can be beaten or decapitated for not wearing a veil.

So, where are the economists? Are they or are they not supposed to produce ideas? And they are paid, for what? I will table an idea, for free: why don't we all go back to a controlled economy? The public sector will miraculously and suddenly have the P-word (a Plan); the private sector will be regulated, and the resources of the world will belong to the people of the world, not a handful of mega-rich corporations. And your pension plans will be safe from the hands of those who gamble them away on speculative and will likely leave you with nothing.