5 dead, over 300 injured and 60 missing as police attack protesters in Bahrain. Police clampdown as foreign camera crews are attacked. Capital city resembles war zone as tanks control streets and helicopters fly overhead. Protesters determined not to give in. Is this, the first such incident in the Gulf, the second domino to fall after Egypt? 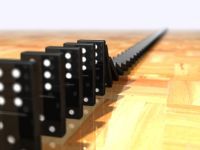 In the Gulf State of Bahrain, a monarchy ruled since 1999 by King Hamad, protesters who were demanding a constitutional democracy had been camped out in Pearl Square in the capital city of Manama since Tuesday. Tension had been building as growing numbers of young people gathered, some to protest, others to give blood in anticipation of mass injuries, others to deface pictures of the monarchy.

Early on Thursday morning, still during the night, the tension gave way to violence as the security forces clamped down. At least one hundred riot police lined up on one side of the square and charged, sending the protesters fleeing down side streets, women and children being caught up in the panic. Columns of tanks and armoured personnel carriers moved onto the streets, helicopters conducted flyovers lasting all day. Security fences have been put up by the armed forces around Pearl Square.

Shocking scenes of violence were witnessed by local and foreign journalists; among these were attacks on ambulances by the security forces, trying to prevent them from reaching the victims and assault and battery against journalists. Heavy-handed tactics saw rubber bullets being deployed in the first round of the battle, launched as the protesters were sleeping.

For now, Manama has been shut down by the armed forces, but there is an eerie and ominous silence on the streets, the feeling that round one belongs to the regime, but round two is waiting to be played after prayers on Friday.

Bahrain gained independence from the United Kingdom in 1971 and since then tensions have been growing between the ruling elite, predominantly Sunni Moslems (33%) and the population, Shiites (66%). The Shiite Moslems complain they are subjected to unfair laws and treatment. Unrest has been rife over the years.

In 1999, Sheikh Hamad bin Isa Al Khalifa became Emir of Bahrain and started a reform programme before proclaiming himself King in 2002 and holding elections. However, these were boycotted by the opposition because the upper, appointed chamber of parliament was given the same powers as the lower, elected chamber.

Today, the demonstrators are demanding a release of political prisoners and a constitutional monarchy functioning in a pluralistic democracy; they want jobs and housing and insist that the Prime Minister, Sheikh Khalifa bin Salman Al Khalifa, in power for 40 years, has to step down.

The heavy-handed methods used by the security forces this morning, while moving the protesters off the streets, have sent a shockwave of seething rage through the population. Press reports have confirmed eyewitness reports claiming that the four deceased were shot dead and hundreds of people gathered outside the hospitals to hear of stories of attacks against ambulances by the security forces ad the hundreds of wounded were rushed in.

Tomorrow all eyes will be on this tiny oil-rich Gulf island-State of 1.2 million people with its 48,000 barrels of oil per day, home to the US Fifth Fleet and the fastest-growing economy in the Arab world. If the authorities in Bahrain fall, we can say the domino effect has begun.