Cabinda is lucky to be alive 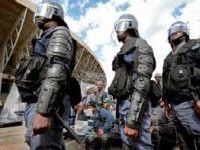 The Angolan regime is not with half measures. And if, in Angola, someone lights a match because they want to smoke, they are liable to be accused of disorder in the colony of Cabinda. Those who light a match are held for wanting to cause a fire.

The streets of Cabinda have at this time more riot police and soldiers than usual. Colonial authorities were told that young people would go into the street celebrating the results of the referendum in Sudan, who voted "yes" on the independence of the South of the country.

But then what is it? Both the Angolans and the Cabindas can only celebrate what the regime allows, and that consists of celebrating the great leader, Jose Eduardo dos Santos, and the great party that is the MPLA. Apart from that, everything is a crime against state security.

Even though not being youths, the main figures of Cabinda have their homes monitored 24 hours a day by police and military. The MPLA does not mess around and therefore kills first and asks questions later, and applies the law that until proven otherwise, everyone is guilty.

According to John Mavungo, civic activist, anyone in the colony of Cabinda who sets foot outside the house is soon subjected to interrogation and searches by officials at the service of the colonial power. Even women who want to go to mass are frisked in the street, or undergo other intimidating actions by the Angolan authorities...they are not going to transport a belt of explosives or who knows, a few Ak-47s ...

It is registered, however, that 11 agents of the National Police from Angola, armed with revolvers and pistols stormed the residence of Prospero Mambuco Sumbo, located in the Gika district in Cabinda city, on the 10th of February.

It was nearly 21 hours when police officers knocked on the door of the house without a warrant to search or capture. They dominated over his wife, Albertina Vango, and the daughter of the activist. They were forced to stay in one room while some of them went to the bedroom, some to the kitchen, without revealing the purpose of the search. 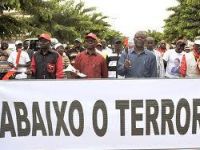 After the search, Albertina Vango was interrogated about the whereabouts of her husband. The interrogation resulted in abuse, two police officers slapped the activist's wife, threatened her with guns and squeezed her neck which was tied with a rag. Mother and daughter were being tortured two hours by the henchmen of President José Eduardo dos Santos.

The agents of the police only left the house after Albertina Vango had said that her husband had left the house at 12 o'clock, accompanied by Alexandre Cuanga, his friend. The efforts took with them the message of the Democratic Block addressed to an activist, Próspero Mambuco Sumbo, at the time of his acquittal on the 22nd of last December.

It is further recalled that Alexander Cuanga and Próspero Mambuco Sumbo have been held (November 10, 2010) and convicted by the Cabinda Provincial Court, on November 16, 2010, the first received one year in prison, and the second six months, for engaging in a "Campaign for a Just Solution of the Question of Cabinda."

After 42 days in detention in the Unit Prison of Yabi (UPY), they were acquitted in the company of Raul Tati, Luemba Francisco, Belchior Tati Lanzo, Andre Benjamin and Jose Zeferino Puati Fuca.