Amid rumours in Cairo that Egypt's President Hosni Mubarak is teetering on the brink, after Tunisia's Ben Ali was forced to flee the country, comes the launching of a new era in world history: People Power has the drive to remove political regimes and to implant the collective will of the population...and it is here to stay. 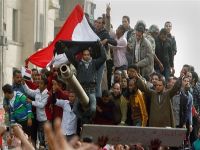 Just like the last Great Revolution, when humankind gained the right to literacy, first, and the ability to read the Bible in the vernacular (a movement which sent shockwaves through the Christian world, causing tremendous social upheaval) and later, education and the right to knowledge, the Great Revolution we are witnessing today in the Middle East is connected to information.

What is unfolding in the Middle East is the Revolution of Knowledge, where the networking and exchanging information brings a collective power to the people, an irresistible force which has the capacity to shift what was hitherto seen as an immovable mass.

Just as once upon a time the Church monopolised knowledge and through this, power, more recently political regimes across the globe, for a myriad of complex historical, economic, sociological and developmental reasons, controlled the reins of power, bringing stability not only to the clique in power and those grey figures who kept them there, but also to whole geo-political regions.

The USA and its allies were happy to do business with Hosni Mubarak's Egypt, turning a blind eye to the billions being amassed in Swiss bank accounts and offshore deposits, the abuses of power and the corruption among the elite, while in developmental terms the country ranks alongside Tonga and the police force behaved like terrorists.

Egypt in return behaved nicely, maintaining a status quo in the region which favoured the interests of those who in turn wished to keep in with the powerful Jewish Lobbies at home, and support Israel, while turning a blind eye to Tel Aviv's illegal tenure of land outside the 1948 frontiers and shocking war crimes and massacres, such as phosphorous attacks on Palestinian schools, desecration of cemeteries, destruction of property and illegal seizure of lands.

Now, however, it is not enough for Ben Ali in Tunisia and Hosni Mubarak in Egypt, to name just two of the countries struggling with popular upheaval in the region (as the undemocratic Monarchies in the Gulf look on nervously), and their regimes, to hold the people down using the age-old methods of fear, repression and violence.

Through networking, using the Internet, young people (the force behind the People's Power movement) across the Middle East have access to information on how their peers live in other parts of the world, they can chat with Russians, Americans, South Africans, share views with Brazilians, see pictures of New Zealand and correspond with a person in Burkina Faso.

If knowledge is no longer the feud of the Church, it is also no longer in the hands of the State, but very much present in the power behind the People. What we are witnessing today not only on the streets of Cairo, nor only in the Middle East but across the world, is the confirmation that the non-Clauswitzian world has arrived, one in which those who have the power to perform acts of war do not have to belong to a military structure, or in other words, the individual has powers to confront the State.

When a collection of individuals comes together to express a collective will, as we have seen, fuelled by updated information and having the power to communicate in real time, the wave becomes a tsunami which sweeps all before it.

What is reassuring is the fact that most people are reasonable and most societies have the capacity for tremendous political maturity when called upon to express it. Everyone on this planet prefers to laugh rather than cry, and whether they are Jews or Arabs or Moslems or Christians or black or white or yellow, their tears taste of salt. The world of today is not for extremists; the great victories of the political Left over the last century made sure this is not necessary.

That is why it is important that extremist political forces do not hijack the People's Power movements and that the new leadership respects internationally recognised norms of good governance in today's world, not a displaced agenda of yesteryear.