The Guardian, Harding and the British obsession with the Cold War

Luke Harding was not "expelled" from Russia, neither was his visa annulled. He was prevented from entering the country because he had not fulfilled the legal requirements applying to him, and every other foreign journalist. So what? As usual, however, the British press takes up the story...and it's Russia bashing time! 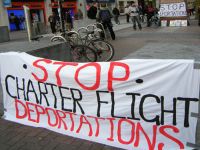 As I pointed out before, the British media, spearheaded by the British Bullshit Corporation, Sky Wey-Hey! (Raspberry) Whoops-a-daisy! News and the troupe of guttersnipes posing as journalists, who make a living shaping public opinion with a carefully managed mish-mash of hogwash, balderdash and poppycock, collectively have a "thing" about Russia.

This "thing" is quite easy to describe. It is the desire to perpetuate the Cold War, serving one purpose only: to increase the image and identity of a hostile "them" to justify the "us". In Russia's case, she is sufficiently large and powerful to be a perfect "them", and just as gloom and doom stories pour out of Africa in the same fetid, gutter TV media resources and sewer press, Russia is a constant source of negative images, ranging from vapid lies about "corruption", idiotic and totally unfounded references to a "mafia state" and blatant slander and libel against the legitimately elected authorities.

Right from the beginning, in fact, Russia has always been the target of interference, insolence and agents provocateurs. At the beginning of last century they did not stop until they created the Civil War, then shortly afterwards, the same powers that sat back gleefully watching from the sidelines were happy to see the USSR sacrificing 26 million of its souls, inflicting 90 per cent of the Wehrmacht's casualties while defeating Fascism and freeing Europe from a horrific racist and xenophobic Nazi tyranny.

What was the thank-you message? The Cold War, years of skulduggery, trillions of dollars spent trying to sabotage Moscow's policies at home and abroad as Russia selflessly liberated millions from imperialism, building roads and hospitals and schools and hospitals half-way across the world. For the Russians - ask them - the Cold War ended in 1991 and the nation moved on.

Not so for many in the West, apparently, where what is practised is not what is preached. And this is the context of the silly little pawn, Luke Harding and his silly little story about being expelled from Russia. Perhaps he needed the hype to perpetuate his existence.

As usual, Harding had focused his time in Russia on finding negative stories slightly more puerile than the "Ten-breasted alien rapes politician in underground toilet" type of story - unfounded and libellous allegations and insinuations ranging from the sublime - about Vladimir Putin's private matters, to the ridiculous - nonsensical claims that Russia is a "mafia State".

Why no, he was hanging around the Caucasus, poking his nose around in Ingushetia, of all places, and then interviewing the Daguestani father of that demented sow Mariam Sharipova who murdered 26 innocent civilians on the Moscow Metro in March 2010. The most puerile accusation of all was an attempt to link the Kremlin (at the time when Vladimir Putin was President) with the killing of Aleksandr Litvinenko, when there is firstly not a shred of evidence to back the accusation up, secondly it is clear that Litvinenko had been involved in shady deals with even shadier Caucasus characters and thirdly, when there was a total absence of any motive. 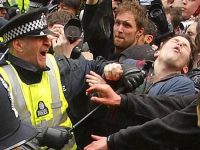 Then, according to the Guardian, Harding leaves Russia for two months and travels back there with a visa in a passport. What visa? Where and when was it issued and by whom? And why was it cancelled? These are all questions for which a serious journalist - or newspaper - waits to find out the facts before reporting. Not so the Guardian.

This...newspaper...states its journalist was expelled from Russia. How, if he was turned away before he had entered? It says he was not given a reason for the refusal to allow him into Russia but then states that his visa was annulled. It then claims that the visa decision was taken at a "very high level", so we can infer from this that the same (thousands of) decisions at British ports and airports and railway stations come from where? Number 10? And by the way who gives asylum to Chechen terrorists?

In fact, the reason why Luke Harding was denied entry is perfectly straightforward and would have been taken at the lowest level of passport control officers. The reason was that he violated a series of rules which apply not to Luke Harding and the Guardian newspaper, but to all foreign journalists, rules which have applied since they were adopted not last month, but back in 1994. Nineteen ninety-four.

The Russian foreign ministry confirms that his visa was not annulled. It expired. It expired last Autumn and was extended upon his request until May. Harding should have known, as a professional journalist, that he had to acquire a new press accreditation card before he left Russia last November. The procedure is simple. According to the Foreign Ministry: "If Harding is still interested in working in Russia until his entry visa expires, he needs to have accreditation issues settled with the Russian Foreign Ministry's press and information department."

So he was not denied entry because his visa was annulled, neither was he expelled for being an undesirable, a trouble maker, an upstart and an agent provocateur looking for trouble to stir up, even though he repeatedly visited a security zone with a counter terrorism regime ongoing. And how low in the dustbin his scrabbling - and that of his newspaper's dirt-digging muck-raking editors - had become, that the Guardian was reduced to claiming that his Wikileaks "revelations" were to cause a furore in Moscow - after Moscow has said time and again that it could not care less about Wikileaks.

Once again we have a case of denigration, scare-mongering and hypocrisy. After all, close members of my own family have allegedly been called aside upon entry into the USA and asked questions about any connection to Pravda.Ru simply because they bore the same surname as myself and were asked whether they shared the same political viewpoints.

As for me, I have been working with Pravda.Ru for over a decade, have never once had a single editorial directive placed over me, have never been told by anyone not to write anything, have never been the subject of any type of censorship whatsoever from the authorities and have been left to write freely about politics, religion, sport, the environment, finance, international relations, humour, history, traditions, social interest stories, terrorist attacks, you name it.

I never felt the desire to consort with terrorists, to share the bed with the underworld or cavort with criminals. These are the people who get into trouble, in Russia, England or Burkina Faso.