Those who are looking for Revolutions in the Middle East are misguided. For the time being. The enormous question mark hanging over Egypt, in particular, and the region, in general, is who or what is drawn into, or takes advantage of, the existence of any power vacuum... 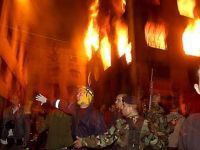 It is possible to make too much of the riots that have taken place this month in Morocco, Algeria, Tunisia, Egypt, Yemen and Jordan, the more so because much of the unrest has its roots in different causes which have existed for months, if not years; these are certainly not the first riots to have broken out in these countries.

An important common underlying cause of the discontent and unrest, however, is the high level of unemployment in this region, coupled with stagnant economies, creating few jobs, leaving the younger members of society without any hope for the future; another is the rocketing prices of staple foodstuffs such as sugar and bread.

However, if there is a social element to the discontent, there is also a political one. Autocratic regimes, accused of being steeped in corruption and trafficking of influences, seen as having lost touch with the population, are confronted with a shockwave of popular indignation - or fury - exacerbated by the difficult living conditions. A clear example of the extent to which the regimes have lost touch with reality is provided by Egypt, where the authorities claimed that the kind of widespread unrest which took place in Tunisia would never happen. Three days later...

The end result can only be that things will never be the same again for the region and for the way it is governed, due to the fact that the status quo has changed. In Tunisia, the Islamic leader Rachid Ghannouchi has been welcomed by thousands of well-wishers at Tunis airport, after returning from a 22-year exile; in Egypt the Opposition leader Mohammed El Baradei appeared in Tahrir Square, calling for President Mubarak to step down. The question is also posed whether the Islamic Brotherhood will see itself in an enhanced role amid the turmoil.

What is different about the current situation is that the rioting has reached a political level. First, Tunisia's President Zine al-Abidine Ben Ali was forced to flee the country after 23 years in power, now Hosni Mubarak clings desperately on to the reigns of his crumbling regime, having been forced to dismiss the Government and having seen any chance of a further term as President - or a first term for his son Gamal - disappear.

A further question is raised as to the accuracy of election results, today so hotly contested in Egypt with claims of electoral fraud back in 2005, yet Hosni Mubarak won with 88.6 per cent of the vote, just as Ben Ali won the Presidential election in Tunisia in 2009 with 89.62%. Parliamentary elections in Egypt last year were fraught with allegations of vote-tampering and harassment of opposition candidates.

Those looking for an anti-West, anti-Israel element in the demonstrations did not find one. The television images did not show a single American flag being burned and there was no evidence of an international element to the popular uprisings, the concerns being local and economic, as mentioned above.

However, the fact that many of the leaders in the region sit upon regimes which have been in power for decades means that the status quo, which at least has maintained peace and stability in the region, is not at risk. For example, Hosni Mubarak's Egypt has been instrumental in the Middle East peace process and Cairo maintains a good working relationship with Tel Aviv. In Yemen, where violent demonstrations have taken place in the capital, Sana'a, calling for a change of Government, the 30-year rule of President Ali Abdullah Saleh - a key US ally against Al Qaeda - is equally threatened.

It remains to be seen whether the measures frantically rushed through the legislation mechanisms by the frightened regimes in Algeria, Tunisia, Egypt, Yemen and Jordan (the countries most affected) to placate the popular fury will be enough. It also remains to be seen what happens next as regards who is involved in government.

To date, the Islamists have been keeping a low profile - in Egypt the Islamic Brotherhood has stressed that the uprising has nothing to do with the movement and everything to do with an outpouring of frustration by the country's youth - making up two-thirds of the population and representing 90% of the unemployed. Nevertheless, the Brotherhood exists and its goals are a state based upon Islamic law.

How far the unrest spreads, and whether or not it reaches the Gulf States, is a question that only time will answer. And if that happens, with the Islamists on board, the political map of the Middle East may change drastically, and will certainly not be in the interests of Washington and its ally, Israel.