UNO: U is for United

The idea of having a United Nations Organization is to have an international community that works as one, united - a community of United Nations pulling in one direction, solving problems together and treating one another like brothers and sisters. What we have, in fact, could hardly be more different. 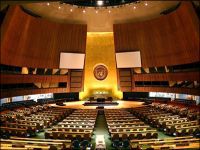 The idea of forming a United Nations Organization back in the aftermath of the Second World War was to forge an international community which spoke with one voice, pooling resources, following the same laws, applicable to all, on an equal basis, making and respecting pledges as the haves helped the have-nots.

Acting with a single voice would imply that all nations act with humility and not as protagonists, trying to stick their necks out to be one step ahead of the pack. This would imply that any UN court or tribunal would and should have jurisdiction over all but in fact, certain nations pick and choose whether or not their citizens are liable for prosecution, engineering te system to make sure they can commit war crimes and remain outside the jurisdiction of what is seen as a foreign organism.

The UNO was supposed to be all-inclusive, not "foreign".

The UNO can only be credible if all members of the international community respect it for what it is, a super-national stateless umbrella working for the common good. Already this century, this decade, we had a clique of nations (originally the USA, UK, Portugal and Spain) jumping the gun at the secret Azores meeting between George Bush, Tony Blair, José Aznar and José Barroso, a meeting which was the precursor to a handful of nations going it alone outside the UNO, without asking for a second resolution, which was always necessary under the UN Charter which these countries had signed. And they knew it.

George Bush even made derisory, sneering references to the UNO as a "League of Nations", a reference to the incipient body in the early part of the 20th century which experienced problems in asserting itself. Hardly surprising with attitudes like his.

This also goes for the policies of the United Nations Organization as it strives to implement them, from arms control and non-proliferation to food aid and education programmes. How can these programmes be properly implemented if at another, secret, level, vested interests are aiding and abetting, arming and encouraging groups to foster lucrative contracts for resources or to be regional power brokers with strings attached?

Indeed, on a more cynical level, members of the international community even go so far as to pledge financing and resources for these programmes, telling all and sundry what they are doing and how high and mighty they are, then when it comes to producing what they promised, they disappear with their tails between their legs.

So serious is the problem that the UNO is to set up a Commission precisely to track not only where the resources are applied in the field (making the process totally transparent and accountable) but also to track down the pledges made to see how many promises are kept.

A telling example of the way in which the abuse of the UNO creates shockwaves in the field is Iraq, a country which was illegally invaded, whose civilian structures were targeted with military hardware before the White House doled out rebuilding contracts - without tender in many cases - a country whose citizens had to endure the humility of being tortured, raped and sodomised by US security personnel while being illegally detained. What a wonderful way to build bridges and win hearts and minds.

Eight years on, nearly 200,000 Iraqis continue to live in Jordan and Syria, too frightened to go back home because the invasion brought about imbalances in society. 34% of the Iraqi refugees registered with the UNHCR are deemed vulnerable. What is more, new asylum seekers are registering daily. And where is the money to support them?

This is what happens when members of the international community decide to act unilaterally. Let it be a lesson as to the needs of multi-lateralism, an approach defended from the beginning by the Russian Federation, based upon respect for international law and using the UN Security Council as the proper forum for crisis management.