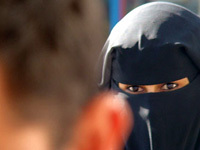 Post-9/11, Western media, especially in America and Britain, describe Muslims as fundamentalists, extremists, terrorists, and fanatics. Throughout the West, Islam is identified with violence, when, in fact it has common roots with Christianity and Judaism. Their tenets are based on love, not hate; peace, not violence; charity, not exploitation; and a just, fair society for people of all faiths. You'd never know it from Islamophobic media reports.

- monolithic, static, and unresponsive to change;

- having differing values from other cultures and religions;

- being inferior to Western societies;

- an ideology used for political or military advantage;

- warranting discriminatory practices that exclude Muslims from mainstream society; and

A 2004 UK Commission on Muslims and Islamophobia report titled, "Islamophobia: issues, challenges and action," said 1.6 million British Muslims live "on a diet of death, hypocrisy and neglect that is traumatizing and radicalizing an entire generation. What does the future hold" it asks? How can secular Britain accommodate religious Muslims? What's been done to counter Islamophobia's debilitating effects? Why has official action been absent? "Why is the antiracist movement so reluctant to address prejudice, hate and discrimination based on religion?" Is Western Islamophobia institutionalized, and at what cost?

Its societies are led by white, mainly Christian, middle and upper class men. They're responsible for serving all their citizens. However, non-Muslim white people institutionalize Islamophobia, instead of denouncing and expunging it.

It's a new term for an old fear since eighth century Europe. Key since the 1960s is the presence of 15 million Western European Muslims, millions more in America. Resource wars is another factor, mainly for oil and gas. Others include misperceptions of Islam, wrongly associating it with violence and terror, as well as exploiting this notion for political advantage. Supportive media reports then stoke fear and hostility, portraying Muslims stereotypically as dangerous and threatening.

On October 22, 2001, Edward Said's Nation magazine article, titled "The Clash of Ignorance," criticized both men, calling their thinking "belligerent." Citing Huntington's 1993 analysis "The Clash of Civilization?" and Lewis' 1990 "The Roots of Muslim Rage," he said both men treat Islam(ic) identity and culture in "cartoonlike" fashion, "where Popeye and Bluto bash each other mercilessly," the more "virtuous" one prevailing. They and others like them rely on stereotypes and gimmickry, not reason or informed analysis, Hollywood and the major media always in lockstep.

A 2002 Paul Weyrich/William Lind essay headlined, "Why Islam is a Threat to America and the West," calling it a fifth column and religion of war. In September 2001, hatemonger Ann Coulter wrote:

"We should invade their countries, kill their leaders and convert them to Christianity. We weren't punctilious about locating and punishing only Hitler and his top officials. We carpet bombed German cities and killed civilians. That's war. And this is war."

In February 2002, Pat Robertson said Muslims "want to coexist until they can control, dominate and then, if need be, destroy. (You) can't say that Muslim religion is a religion of peace. It's not."

From then until now, it hasn't let up, notable figures and media reports spreading hate and fear, supporting global imperial wars. Contrasting a West/East dichotomy, Edward Said wrote about colonizers v. the colonized, "the familiar (Europe, West, us) and the strange (the Orient, East, them)." The strong against the weak. The superior against the lesser. The belief that might makes right, no matter how misguided, destructive or hateful.

Professor Deepa Kumar is active in social movements for peace and global justice. She also conducts research in areas of war, imperialism, globalization, class, gender, and the media, including how it treats Islam.

Her recent essay titled, "Framing Islam: The Resurgence of Orientalism During the Bush II Era" deals with post-9/11 events relating, explaining the reemergence of "clash of civilizations" extremism. Under Bush II and Obama, it became "commonsense," a dominant political logic.

(1) Islam is monolithic. In fact, as practiced in dozens of countries globally, it's diverse within many Sunni and Shiite branches.

(2) It's uniquely sexist. In fact, no more or less than all major religions. Christian dogma says Eve was created out of Adam's rib. European and American women once were burned at the stake as witches. It took them a 100 year struggle to be able to vote. Their rights have always been attacked, including over their own bodies, Christian fascists promoting male gender dominance, and right to fetal life over pregnant women and men.

(3) It's inherently violent and intolerant, the term "jihad' wrongfully used to connote holy war. In fact, it refers both to an internal struggle to overcome one's weaknesses, as well as a lesser one for self-preservation and defense.

(4) The "Muslim mind" is incapable of reason and science. On September 12, 2006, Pope Benedict XVI equated Catholicism with reason, saying violent Islam lacked it. Many others before him made the same argument, as spurious and racist then as now.

(5) "The West spreads democracy, while Islam spawns terrorism." As a result, Western civilization must modernize and tame it. America, of course, disdains democratic freedoms, preferring easily co-opted despots, not social justice and liberation.

Kumar fights myths with scholarly analysis, exposing them as hateful and bogus.

In a September 22, 2010 interview, she examined Islamophobia in America, saying fear and animosity toward Muslims prevail.

"I don't think, however that (it) comes from regular Americans. Rather, (post-9/11), the mainstream media and the political elite have helped generate an attitude toward Muslims that has been largely negative. Most recently," Tea Party extremists exploited it. Another group called "Stop Islamization of America" promotes the notion "that Muslims are conspiring to take over the US."

Films, the major media, and hate groups have manipulated ordinary Americans. "Every country that seeks to obtain the consent of its citizens for war must construct an enemy that is feared and hated." Bush officials used Islam, much like Cold War tactics vilified communists and Japanese Americans were denigrated and abused during WW II. "Today all Muslims are viewed as responsible for the events that took place on 9/11," hatemongering and fear replacing truth, Hollywood and major media reports in the lead.

Films especially depict "Arab men as barbaric, violent, gaudy, lascivious, and of Muslim majority countries as uncivilized, misogynistic, irrational, and undemocratic." Major media reports pick it up, "tak(ing) their cues from the 'primary definers of news,' that is, people who are the key political and economic leaders." They've largely "branded the Muslim community as untrustworthy and anti-American." Mainstream media reports echo the same theme.

On January 10, Kumar titled a Monthly Review article, "How to Fight Islamophobia and the Far Right, in Europe and the United States," saying:

"What we are seeing is a right-wing populist movement beginning to manifest racism at its core." It's both electoral and grassroots "based on intimidating Muslim communities and Latino immigrants." Islamophobia incites "war on terror" hysteria and "serv(es) the domestic agenda of the far right in ways similar to what has gone on in Europe."

A weak-kneed centrist approach "only strengthens the far right," as true in America as abroad. Combating Islamophobia demands exposing it "as the scapegoating tactic of a system in crisis." To prevail, however, requires "political and economic alternative(s) to neoliberalism and war," but don't expect major media help promoting them.

Kumar's International Socialist Review March/April 2007 article titled, "Islam and Islamophobia" explained how, over the previous year, Muslim-bashing in America and Europe was relentless. It's no different today. Their common thread "is a polarized view of the world," a classic good v. evil struggle, hyperbolically portraying a democratic West against barbaric, uncivilized Islam, wanting to create "an Islamic empire stretching from Europe to South East Asia." Never mind that people of all religions and ethnicities everywhere want social justice, freedom and peace.

Orientalists, however, view the West as "dynamic, complex, and ever changing," while Islam "is static, barbaric, and despotic." It needs "Western intervention to bring about progressive change," what Islamic societies can't do for themselves.

Kumar argues that "Confronting Islamophobia and challenging American racism toward the people of the Middle East is an essential precondition for the rebirth of a strong antiwar movement." Its inability or unwillingness to challenge Islamophobia has been one of its biggest weaknesses. "Our future, quite literally, depends on building such a movement." Progressive change depends on a foundation of peace, equal justice, and democratic freedoms, achievements so far nowhere in sight.