My recent publication Morocco, the Monster, received many comments from Moroccans who complained it did not respect the claims of international law. Here, I repeat and reiterate exactly the same points, this time backed up by73 professors of International Law and International Relations of 32 Spanish universities, plus the Spanish Society for International Law of Human Rights (AEDIDH). 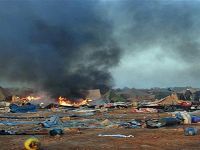 The systematic violation of human rights of the Saharawi population in the occupied territories has been a sad reality for more than three decades. But the way the Moroccan army proceeded to dismantle the camp and repress Izik Agdaym brought the situation to the limit. We face serious human rights violations, which are nothing more than the ultimate consequence of another serious violation: the right to self-determination for the Saharawi people, categorically stated by the UN.

Spain has a legal obligation to promote the exercise of the right to self-determination for the Saharawi people, as it is, in law, the territory's administering power. Through tripartite agreements Madrid, Spain surrendered the territory to those who, as already stated by the International Court of Justice, had no legal title over it. As noted by the UN General Assembly, a State does not lose his status as the administering power, or is released from the obligations arising from it, simply by saying so.

Accordingly, as established by the General Assembly in 1979, Morocco is illegally occupying the territory, in the same way as Israel is, in the occupied Palestinian territories. Thus, Morocco systematically violated, inter alia, the Fourth Geneva Convention, which establishes the obligations of the occupying power, most notably the prohibition of transferring part of its own population into occupied territory (Article 49). At present, it is estimated that in the territory there are four Moroccan settlers for each Sahrawi.

As a result of the illegality of the occupation of the territory by Morocco, a State, even France, its most faithful and unconditional ally, has recognized the annexation. For the same reason as stated by the Council of the UN and the European Parliament has confirmed in separate opinions, the exploitation of Saharawi natural resources without the approval of their representatives (Frente Polisario), and the ensuing impact on the benefit of the Sahrawi people, are in violation of international law. The European Union, which boasts of defending human rights in the world, conditioning the implementation of their agreements with third states to respect these human rights, look the other way when it comes to Morocco and knowingly violates international law.

But it's worth considering, even briefly, the arguments of the Spanish government for failing to condemn the current situation and not strongly supporting the implementation of international law. Supporting self-determination for the Saharawi people is not siding with one party, but purely and simply defending the application of international law, which, moreover, it did in the Iraq conflict.

A classic argument is that Spain and holds a position of "active neutrality" to the conflict. But neutrality does not exist in law, who did not support its implementation is its violation. Moreover, our government has even argued that Morocco might consider such a sentence as interference in its internal affairs. Well, since the adoption of Resolution 1514 (XV) of the General Assembly on the Granting of Independence to Colonial Countries and Peoples, which is now 50 years old, and which largely laid the foundations of decolonization, is outside any minimally rigorous discussion that is not an internal Moroccan international question because Western Sahara is a territory awaiting decolonization and not part of Moroccan territory.

After its election victory, the Socialist Government said that the ethical principles and respect for international law inspire its external action, but they are now "national interests" which prevail over those. But also, the way he it is acting has not even guaranteed that the national interest, as Ceuta and Melilla have been and will continue to chip in our relations with Rabat, with or without Sahara, illegal immigration will continue being organized from the Saharawi and Moroccan coasts by those seeking to fight it, and the effectiveness of Morocco as a disincentive to the entry of terrorist fundamentalism in Europe, on the other hand, is openly rejected by the Saharawi society, practicing an open version of Islam, can at least be questioned after the Casablanca attacks (against the House of Spain in 2003) and Madrid (2004). 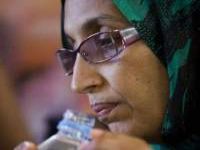 After three decades of war of national liberation, in 1991 the Polisario Front agreed to replace the weapons with the polls in the hope that United Nations would be able to make a success of a peace plan that had been freely negotiated by the parties. But since its inception, this plan was boycotted by Morocco, as has been reported, among others, by James Baker. There is already a census for the referendum made by the UN, but the French veto prevented the meeting.

While the peace plan remains stalled, and in the Sahara occur these gross violations of human rights, our country is concerned about its national interest, the European Union and the UN's own limitation as "deplorable." In this case, it ultimately prevents the Saharawi people from determining freely their future through a referendum of self-determination in the terms established by UN resolutions, no one can accuse of failing to explore all peaceful means imaginable to stop their suffering.

Photo 2: The Saharawi heroine, Aminetu Haidar, who broke Morocco's back single-handedly in a hunger strike in 2010