Turkey wishes to enter the European Union as a dynamic, modern and vigorous new country. It has every right to present its application. However, before doing to, it must come to terms with its past, admit what was wrong and move on. One of the greatest evils perpetrated throughout human history was the Armenian Genocide, something which Turkey denies. 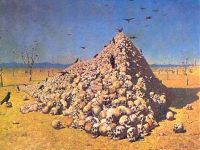 What is there to deny? By definition, Genocide is the deliberate and systematic destruction, in whole or in part, of an ethnic, racial, religious, or national group; a massacre, in contrast, is a generalised act of mass murder.

April 24, 1915 is generally held to be the day on which the Genocide started, a process which went on during and after World War One which resulted in the death of between one and 1,5 million Armenians. In fact, the process started long before, when in the 14th and 15th centuries, Armenians were harshly treated and despised by the Turks who called them gavour, (from which derives keffir, kaffir) or infidel. Lands were pillaged, women were abused, people were summarily executed.

Things started to gain pace and from 1865, the Armenian Community began addressing the Ottoman government complaining about its status as second-class citizens across the Empire but particularly in Western Armenia, where the vast majority of the population was based. The leader of the Community, Nerses II, Armenian Patriarch of Constantinople, referred to "forced land seizure ... forced conversion of women and children, arson, protection extortion rape, and murder". 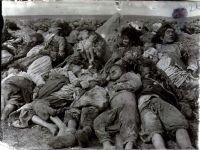 After the victory of Russia in the Russo-Turkish War (1877-1878), the Armenians insisted that the Russians should occupy the Armenian-populated provinces until the Ottoman government implemented full reforms. Great Britain opposed this and effectively removed any chance at policing it. The practical result was that Ottoman Sultan Abdul Hamid II unleashed a Kurdish militia called Hamidiye, who he instructed to "deal with the Armenians as they wished". There ensued a period of provocation by the Ottoman authorities (over-taxation), resulting in the massacres in Sasun (1894) and Zeitun (1895/6). Massacres ensued all over the Empire, in Bitlis, Diyarbekir, Erzerum, Harput, Sivas, Trabzon and Van (Hamidian Massacres, which according to independent figures amounted to the slaughter of between 100,000 and 300,000 people).

Hamid was removed in a coup termed the Young Turk Movement (1908) but by 1909 a counter-coup took place and the Ottoman Army pillaged Armenian communities, massacring a further 15 to 30,000 people (Adana Massacre).

From massacres to Genocide

The Ottoman Empire entered the First World War on the side of the Central Axis (Germany and Austria-Hungary) and immediately sought to redress its losses with Russia in the Russo-Turkish war. The result was the Battle of Sarikamis (1914), in which the Ottoman Army was once again annihilated. The Ottoman authorities blamed the Armenians for their part in this victory and so began a policy of systematic genocide. Armenians across the Empire were consigned to unarmed support units, were overburdened with work and were summarily slaughtered by Turkish death gangs.

April 24, 1915 was Red Sunday, when around 250 Armenian leaders across the Ottoman Empire were rounded up and arrested, moved to detention centers near Ankara and then deported. 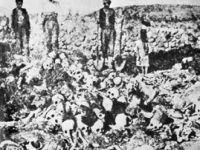 The Genocide had begun. Aitan Belkind, an eye witness in the Ottoman Army, speaks of the burning alive of 5,000 Armenians by Turks. Whole populations of villages were taken together and set fire to. "The shortest method for disposing of the women and children concentrated in the various camps was to burn them."

"Turkish prisoners who had apparently witnessed some of these scenes were horrified and maddened at the remembering the sight. They told the Russians that the stench of the burning human flesh permeated the air for many days after."

The American Consul at Trabzon declares that "Many of the children were loaded into boats and taken out to sea and thrown overboard." Other diplomatic staff witnessed the deaths of thousands of people drowned in the Black Sea. In a forerunner to Nazi-style holocaust practices, many others were gassed to death while many children, including babies, were deliberately infected with typhoid fever during "inoculation programes". 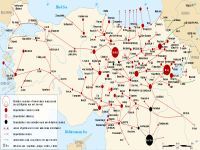 One look at this map, and we can see the tremendous scale and organization of what was a deliberate program of elimination of a people and their cultural influence: Genocide. Confiscations of property, expulsions from ancestral homes, murder, pillage, rape...all took place under the cloak of "national security" and were joined by a new policy of "mass starvation", described by the New York Times as "systematic", "authorized" and "organized by the government." President Theodore Roosevelt later described this policy as "the greatest crime of the war."

Another method used by the Ottomans to kill large numbers of people was the forced march, in which people were forced to cover huge distances in inhospitable conditions without having the minimum of equipment for their security. The columns were frequently attacked and pillaged by Turks as the Ottoman soldiers watched on, or else were attacked by the soldiers themselves.

German engineers witnessed thousands of Armenians being forced into cattle-trucks on the Turkish railways. The "total extermination of the Armenians in Transcaucasia" was referred to by Major General Otto von Lossow, Head of the German Military Plenipotentiary in the Ottoman Empire in 1918.

Finally, concentration camps. Those who survived the forced marches and disgusting conditions in the cattle trucks were crammed into some 25 concentration camps build in Syria, most near the border with modern-day Iraq (i.e. in the middle of nowhere). The following were basically extermination camps:

Now if that is not a policy of Genocide, I don't know what is. Why doesn't Turkey own up and admit what it did was wrong? The question of repatriation of lands stolen from Armenia is another, which belongs to another dirty chapter of international law.