The Golden Voice, and what a unique baritone, had been a professional radio presenter. With life seemingly smiling at him and everything to look forward to, he fell on hard times. Very hard times - he became homeless, destitute, begging for morsels to eat. Addiction, crime, jail. As suddenly as the old year ended and the new year began, his life changed round. 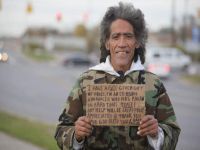 The story of Ted Williams is worthy of any newspaper anywhere on Earth at this time of celebrating joy (Epiphany) the day when Orthodox Christians rejoice with the birth of Jesus and celebrate love and good humour. It is a story of strength over weakness, it is a story of Good over Evil and it is a story of the value of human solidarity.

One month ago, Ted Williams was a dishevelled, dirty nobody practically dressed in rags, begging for money on the intersection of a highway in Ohio, where he would beg for some coins and give the donors a taste of his Golden Voice (he had a placard explaining he had been a radio presenter in the past).

So Golden his voice is that it awoke the attention of reporter Doral Chenoweth of the program Columbus Dispatch, who recorded Ted Williams, 53, and placed the recording on You Tube. It promptly made 8.5 million hits.

Until then, Williams had been living in a makeshift tent at the back of a disused gas station, the result of the wrong choices, the wrong crowd: crack cocaine and alcohol. Job- and homelessless were obviously not far down the road. Crime, prison and a loss of contact with his family ensued.

Now, contracts are raining in, and Williams is a celebrity. He is going to cover all the basketball games of the Cleveland Cavaliers on Fox 8 (he will be the main speaker, will receive a handsome salary and a home). Other offers have come in from MTV, ESPN and the National Football League. One of the first things he did was to clean himself up, cut his hair, get some new clothes and go to visit his elderly mother in New York.

Now his 6 children, 16 grandchildren and 1 great-grandchild are as proud of Ted Williams as he is determined to make this chance pay off: "The Devil took me to Hell and back again"... "remaining sober gives me mental clarity. I am not saying I will never have a drink again but right now that possibility is a long way off".

God Bless Ted Williams. May he have the tremendous strength he needs to take one day at a time, and just enjoy being sober, after all, what feels better than a clean and cleansed human body, without toxins?

What a tremendous story to illuminate this Orthodox Christmas Night. It is difficult to think of a more touching comment to illustrate this special day.