Khodorkovsky case: Blown out of all proportion

Does the Russian press speak about "consequences" when a thief is thrown into jail in the UK, USA or anywhere else? No, because just as other countries have their legal systems, Russia has its own. Mikhail Khodorkovsky and Platon Lebedev were, after due process, found guilty of embezzlement and their jail term was increased. What is political about that? 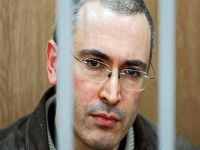 What is it with certain members of the international community, that Russia fascinates them so much they speak of "consequences" when a thief is thrown into jail? Why is it that the same countries that have such strong and noble opinions, fail to extradite terrorists they harbour on their soil for crimes supposedly committed in Russia?

And why does an embezzlement charge have to be politicised? Indeed, why does everything have to be politicised in Russia? The BBC even runs a piece stating that if the sentence had been lenient, it would have meant President Medvedev would win the 2012 Presidential election, while if it were severe, Vladimir Putin would win. Has anyone seen anything more absurd?

The fact of the matter is Khodorkovsky has been found guilty of tax evasion (2005) and embezzlement (2010) by a Russian judicial system which included trials and appeals. Why do the charges, why does the process and why do the sentences have to be political? Because a meddlesome foreign media says so, wishing to perpetuate Cold War myths.

This, by a media which spent decades saying how drab Russia and Russians were, without their journalists ever having stepped inside this wonderful, colourful and friendly country, which spent decades spinning lies, failing to mention the assassination attempts by Western agents provocateurs, misreporting and misinforming, which spent decades creating negative images, deriding everything from Russian women to Russian food, which one magazine, I recall, summed up as "an egg floating in luke-warm water".

Needless to say, Russian cuisine is as vast and varied as the myriad of peoples who constitute the country, from Kaliningrad in the west, to the Caucasus states in the south, to the Arctic Circle, to Korea in the east.

But this doesn't make the news, neither do the facts in the Khodorkovsky trial. Just puerile and nonsensical conjecture, spin and insolence. Mikhail Khodorkovsky has the right to an appeal, a right which he is expected to use. After all, Bernard Madoff was thrown in jail, and where was the political hype in that case?

Nowhere, because Russia for some reason seems to deserve different treatment by those who one supposes never began to understand her.