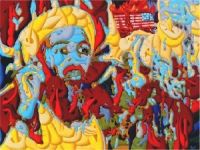 Paulo Coelho, the Brazilian United Nations Messenger of Peace, states in an interview with the UN News Centre that there is no clash of civilizations, rather that this is something the media are trying to sell. What he sees are common values and common principles the world over...and he is right.

As we come into the second decade of the third millennium, the Brazilian UN Messenger of Peace and Special Counsellor for Intercultural Dialogues and Spiritual Convergences at the UN Educational, Scientific and Cultural Organization (UNESCO), Member of the UN "Network of Men Leaders", declares that the so-called "clash of civilizations" does not exist.

For Paulo Coelho, author of The Alchemist and The Pilgrimage, there is no such thing as a "clash": "I don't believe in it. It's something political leaders tried to use, and that the media tried and are still trying to sell us, in order to simplify the world and their work".

For Paulo Coelho, active in the fight against the pandemic of violence against women, what is important is to focus on what unites and not that which divides. "We live the same life, but we can have misunderstanding or non-understanding and that is what we have to work on," he declared in his interview with the UN news site yesterday. "Instead of talking about our differences, we should talk much more about the things we have in common".

And how true this is. During the Cold War, in fact a war that never existed, there were three sides - us and them and those in between, creating a myriad of opportunities for media organisms to sell copy based upon scare stories: The Russians are coming! Reds under the Bed! Remember?

When the Soviet Union entered into the process of voluntary dissolution, foreseen and part of the Constitution (which States like Georgia ceased to respect), the scare stories turned into "wow" stories, with an adrenalin rush being created not by massed Soviet tanks on the border (after all the Warsaw Pact forces were defensive, while NATO's were and are offensive, go figure!) but rather by ever-stretched and invented conflicts, perceived or otherwise, as the world adjusted itself to the power vacuum created by the absence of the Soviet support for countries recently liberated from imperialism.

Soon, things flared up, not because people hated each other but because sinister outside forces exacerbated tensions, selling arms to garner control of resources and many unresolved conflicts became wow! stories. Among these, Western Sahara, invaded by Morocco in 1975, population held down and tortured; Darfur, Southern Sudan, both victims of ridiculous colonialist policies, and more widespread, the Islamic question, which isn't a question at all.

Paulo Coelho is right. There isn't a clash of civilizations, for those of us who have bothered to read the Koran and who have bothered to speak to Moslem wise men to discuss the sunnah, or teachings, know perfectly well that Islam and Christianity have far more in common than points of division.

And let us be frank, as we approach the second decade of the century and millennium: all people, the world over, prefer to laugh rather than to cry. Tears taste of salt, it doesn't matter who sheds them. What we have today is not a question of a clash of civilizations, but rather a clash of interests among those who control power, and this includes the cowards hiding behind the pressure groups...and making money out of them.

True, these days the individual has more power to challenge the State. But until today, those who challenge Humanity have always lost and I believe they will forever after. Common values, universal precepts of decency, universal notions of love unite us all and as we enter the second decade of the millennium, let us all concentrate on these as Paulo Coelho rightly says.