Injustice for all: Obama's immigration agenda 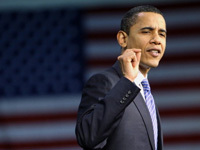 Since taking office, Obama achieved the impossible - compiling a worse record than his fiercest critics feared, worse than George Bush across the board on domestic and foreign policies. He:

-- spied more aggressively than ever on Americans;

-- targeted Social Security, Medicare and Medicaid for erosion and elimination;

-- further institutionalized public wealth transfers to super-rich elites who already have too much;

-- made America more than ever a police state, including by targeting immigrants, holding thousands in hundreds of unlisted, unmarked detention facilities in nearly every state before secret courts deport them, at times stranding them far from home countries.

"For the second year in a row, the government deported more illegal immigrants during the last fiscal year than ever before, according to Immigrations and Customs Enforcement (ICE) figures."

From October 2009 through September 2010, nearly 400,000 were affected (including many long-time residents). These numbers are expected to increase as ICE goon squads reign terror on immigrant communities, targeting homes, work places, and other locations where immigrants congregate.

Omitted by the Times was that detention conditions are inhumane. Secret courts deny due process, and (since 2003) at least 104 deaths occurred. Women are especially impacted, vulnerable to sexual harassment, rape, and loss of their US-born children, American citizens, seized in raids, and put up for adoption.

It's part of Obama's agenda "to make our national laws actually work," targeting the poor, people of color, Muslims and vulnerable immigrants, not elitist criminals allowed to plunder America's wealth and resources with impunity. Legislation even helps them as well as appropriations for illegal imperial wars.

NNIRR promotes just and equitable policy, regardless of immigration status. On December 16, it released a new report condemning increased policing. Titled "Injustice for All: The rise of the US immigration policing regime," it documents human rights abuses against immigrant families, workers and communities.

It accused Washington of running "a brutal system of immigration control and policing that criminalizes immigration status, normalizes the forcible separation of families, destabilizes communities and workplaces, and fuels widespread civil rights violations."

It also increases racial discrimination and hate violence against people of color "perceived to be foreign born or 'illegal," media reports heightening tensions. Over 100 accounts of documented abuse show how immigration policy reigns terror across America from rural New Mexico and North Carolina to New York, Chicago, and Los Angeles.

(3) Militarizing border communities, reinforcing policies that force immigrants to cross dangerous Southwestern areas, especially in extreme summer heat that kills. In 2010, record numbers were recorded, 254 near Arizona's border alone. Other data confirm at least two migrant deaths daily, and for every body found "at least ten others are believed to have disappeared."

(4) "Scapegoating immigrants for the economic crisis, and leveraging anti-immigrant sentiment (for) laws and policies that cut (or) eliminate public services," civil rights, environmental, labor and other social protections.

In the past decade under Bush/Obama, Washington established a repressive regime, using immigration status to scapegoat people of color. A Washington/state/local cabal collaborate on practices violating human rights and civil liberties. Since 2000, 107 cities, towns and counties passed anti-immigrant ordinances restricting their access to services, housing and employment.

Since 2003, ICE combined immigration, national security policies, and Operation Endgame, a 10 year initiative to detain and deport "all removable aliens" targeted for their race and ethnicity. It turned immigration policy into repressive policing, vilifying anyone undocumented and often targeting or indirectly harming US citizens in the process. As a result, immigrants are vulnerable to abuse and exploitation. In addition, communities across America are destabilized and unsafe.

In 2008, ICE implemented Secure Communities, letting local police send fingerprints of arrested people to DHS for matching against immigration records. Those found undocumented are then expedited for deportation.

In April 2010, Arizona enacted anti-immigrant legislation, requiring police to verify any suspected undocumented person. Other states and cities may follow, given a rage to vilify as well as provide prison corporations more profits. Two-thirds of imprisoned immigrants are held in local facilities. "In southern California alone, DHS is set to pay almost $57 million to 13 jails," including for-profit ones.

As a result, racial profiling and other forms of discrimination are rife. Immigrants fear ICE or local authorities may target, arrest and separate them from their families unjustly. They also fear employers, landlords, schools, hospitals and other public agencies may collaborate.

Overall, collaborative "programs between DHS and state and local law enforcement have become the new arbiter of justice when it comes to detecting and arresting undocumented immigrants, many of whom are detained and even deported without a trial or access to a lawyer."

Included were alarming examples of repressive targeting, family separation, traumatizing children, abusing women, beating men, and destabilizing communities. Moreover, "ICE uses prolonged and indefinite detention and the threat of loss of life and freedom as coercion....for immigration status offenders to force them to waive their due process rights and accept deportation."

In detention, abuses are common, including cruel and unusual punishment. One case documented a brutally beaten man expedited for deportation. When forced on a plane, the pilot wouldn't take him, fearing he couldn't survive the trip. Rather than hospitalize him, ICE subjected him to weeks of solitary confinement before "dragging him" at night aboard another flight to Egypt, where he fled to avoid persecution. Dozens of other cases are similar, at times using lethal force.

After Arizona passed SB 1070, its racial profiling law, Juan Varela, a second generation Mexican-American was gunned down in front of his home by a white neighbor who earlier harassed the family, telling them to "go back to their country." In Boston, a white mob brutally beat a Guatemalan man, inflicting permanent brain damage.

Besides a multi-billion dollar ICE budget, Washington spent over $800 million (or $15.1 million per mile) for a 53-mile long Arizona-Mexico "virtual fence." For the entire US-Canadian border, only $20.9 million was spent. By early 2010, over 600 miles of Southwest border walls were built, "harming natural habitat and wildlife migration, expropriating traditional Indigenous lands, and putting border communities under siege."

America's immigration policy is out-of-control. Enacting S. 729: Development, Relief, and Education for Alien Minors Act of 2009, the so-called DREAM Act, won't fix it. On December 18, the Senate defeated the measure that would have:

-- made eligible only high school or GED graduates of "good moral character," who arrived undocumented as minors, resided here continuously for at least five years, and fulfilled their temporary residency obligations in six years;

-- prohibited DREAM students from sponsoring other relatives for permanent residency for at least 12 years, especially parents who brought them to America;

-- established a one-year deadline after completing high school, GED requirements, being admitted to college, or the bill's enactment to make application;

-- required DHS to provide applicant information to any federal, state, tribal, or local law enforcement agency, or intelligence or national security agency in case of criminal investigation or prosecution;

-- mandated permanent residency revocations for immigrants committing a felony after or before submitting applications, no matter how minor;

-- required parents of applicants to register as illegal aliens before applications are accepted, making them instantly vulnerable to deportation;

-- excluded immigrants under orders for deportation;

-- made applicants ineligible for taxpayer-supported financial aid, putting college out of reach for many;

-- mandated full enforcement of the above provisions; any violations render the program null and void; and

-- placed the bureaucratic burden of proof on applicants to prove eligibility.

Overall, America treats aliens like criminals, especially Muslims and those of color, what only a radical mindset change can fix. So far, it's nowhere in sight under either party and won't be in 2011.