At the end of the first decade of the new millennium, and two-thirds of the way towards the Millennium Development Goals, let us give the world a generous three out of ten for failing to address climate change and for failing to adopt an economic system which addresses the needs of the people, not the plutarchy that rules them. 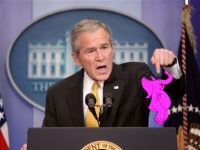 Delivering his speech yesterday to commemorate International Human Solidarity Day, UN Secretary-General Ban Ki-Moon conceded that while significant steps have been taken towards reaching the Millennium Development Goals, a further 64 million people have been pushed below the poverty line due to the world economic crisis while unemployment has risen by a staggering 30 per cent since 2007.

Speaking of "deep disparities" which remain among and within countries, Ban Ki-Moon pointed his finger at the underlying cause: "hard-fought development gains have been jeopardized by economic and financial upheaval, volatility in food prices and energy markets and the impacts of natural disasters and climate change".

In short, the economic system does not work. It is a boom-and-bust system with an endemic unemployment rate, and therefore underclass, sewn into it, it is a system which disrespects public services, in which only large-sized companies can compete for tenders, therefore disregarding totally the Small and Medium-Sized Companies. It is, in short, a system which caters for the high and mighty and not those who work for a living.

Public services are being gradually destroyed, affecting all areas from healthcare to postal delivery services, free education has become a business, available for the haves and shutting out those who have not. It is a three-tier system of the elitist plutarchy who have created various echelons of cliques to feather the nests of countless grey and unelected figures in unelelected Parliaments, Senates, Commissions and so on.

And what kind of an economic system allows not only the banks, but also the insurance companies, municipalities, hospital trust funds, schools and pension funds, to gamble their money on toxic investment products which hold as much credibility as a pink elephant building a nest in a raspberry tree? What kind of economic system allows US-based ratings agencies, such as Moody's, Standard & Poor's and Fitch, to dictate policies which have a direct effect upon our daily lives, by playing around with credit ratings?

What kind of a system is it where the economies of tens of countries (and their main burden of expenditure, worth hundreds of billions of dollars) is controlled not only by their Governments, but by an unelected EU and by an unelected NATO (aka the Weapons Lobby, which also gravitates around the White House dictating Washington's policy).

And what has this wonderful system delivered? A reactionary tsunami against all the basic rights generations of people have fought for, an onslaught against the aspirations of millions of ordinary people, the destruction of the system in which the small trader was free to make a living. The absence of the bakery, butcher's or grocery stores on the street corner bears witness to what has happened.

The former system allowed social mobility based upon merit, not cliques of elitists based on the old boy network. And meanwhile the system which defended "freedom and democracy" was cavorting with terrorists and fascists and criminal regimes holding their people down, making assassination attempts and perpetrating murders against foreign officials, while the one being derided as a pariah was giving its own blood freeing millions from the yolk of imperialism.

So where we are today, is patently obvious to see. In the grip of a restricted group of self-appointed nonentities who nobody elected. Democracy, we have not. And it is this clique that dictates world social and economic policy, controlled by the large corporations. Ladies and Gentlemen, Capitalism has turned full circle, and has emerged from the chrysalis as a monster such as the world has never seen.

The end of this century, which I shall not see, will show us whether the collective will of Humanity is up to the task, dismantling what we have to create something more in lines with what we deserve, and indeed already had.

No system is perfect, all are open to the introductions of vectors more in line with the reality of the equations which constitute the human being. But can anyone say they are satisfied with what we have? For those who say "Yes but how do you pay for it?", three answers.

1. Study public finances, an area of knowledge hidden away behind barred doors; 2. let's imagine we are dealing with bailing out a bank and suddenly billions will become available; 3. the money is indeed there, start taxing the trading of financial derivatives and this will generate so much money that the citizens of the world would not have to pay a dime in tax.