When News is not News, and vice-versa

How is journalism different from accounting? It isn't. While the accountant is expected to present the truth in the books, whatever the reality, in journalism sometimes the need or wish to cook up a hot story and sell copies means that the ethics book flies out the window. Such should not be the case, whether the "victim" is Ashley Biden or the Bush twins. 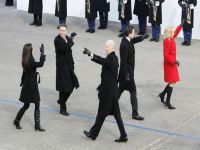 One member of the Biden family is in public office - Joe Biden, the Vice-President of the United States of America and as such, the rest of his family is, according to common decency, off limits. Many were the stories about the Bush twins getting drunk - at the time my position was the same as it is today, with the allegations (true or false) about Ashley Biden, the daughter of the US Vice President, snorting cocaine at a party, namely, so what?

Whatever the truth, it has nothing to do with the position of her father, yet the story which should be out, is the one in which Joe Biden himself likens Julian Assange, the chief editor of Wikileaks, to a terrorist. A terrorist flies aircraft into the Twin Towers killing thousands of innocent people, a terrorist drops cluster bombs in civilian areas in Iraq or strafes wedding parties in Afghanistan, a terrorist deploys military hardware against civilian structures.

Julian Assange has done none of these things. Neither has he, as Biden insists, "put in jeopardy the lives and occupations of people in other parts of the world". By attacking Assange, Biden is making the mistake of treating the symptom and not the disease.

The disease is what caused the leaks in the first place, namely generations of diplomats around the world brought up on mammoth doses of skulduggery, blackmail, under-handedness and deviousness.

By admitting that the US justice department is now involved it appears obvious that the United States of America is trying to do all it can to silence Assange. Too late, the cat is out of the bag and worse is yet to come, namely some bombastic information on the financial institutions, sure to cause yet another tsunami in an already shaky area.

Days after declaring "I don't think there's any substantive damage" done by Wikileaks, Joe Biden makes it quite clear that his government, instead of cleaning up its act so that Wikileaks becomes redundant, prefers to attack freedom of speech, freedom of expression and to defend the plutarchy which now rules our planet, quite against the interests of the people.

This is the news, the Ashley Biden story is private and personal.