"Forest Brothers" Syndrome or one more attempt to rewrite history 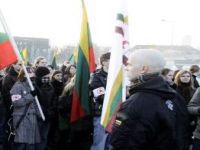 The Lithuanian authorities are making yet another attempt to perpetuate their interpretation of history. This time it is the construction of the monument in homage to the so-called "forest brothers," in other words, terrorists who operated in the territory of the Soviet republics of the Baltic coast in the forties and early in the fifties of last century.

The scandal erupted in Lithuania around a senior police official who had denied there was a holocaust and questioned the decisions of the Nuremberg Tribunal. It generated much outrage, including Western ambassadors accredited in Vilnius. The scandal was hushed up, the policeman was tacitly dismissed. But judging by everything, the Lithuanian authorities have not learned any lesson from it.

In Lithuania the "forest brothers" were very high in the category of "heroes" - fighters for national "independence" that offered active resistance to the "Soviet occupation."  In reality, the situation is somewhat different. The bulk of these troops consisted of individuals who, during the Great Patriotic War, actively collaborated with the Nazis, helping them to solve the so-called "Jewish question" and stand guard in the camps of Soviet prisoners of war.

These "men" also fought against Lithuanians, Latvians and Estonians, who participated in the resistance to Nazi occupation. As a matter of fact, 23,000 of 25,000 people killed by them in the territory of Lithuania were Lithuanian, including one thousand minors.  After all this, the very idea of installing a monument to the "forest brothers" in the center of Lithuania is an action that desecrates the memory of many victims - says the director of "Historical Memory," Aleksandr Diukov.

These actions of the Lithuanian authorities are an attempt to rewrite history. Initially this is done at the national level, that is, the Lithuanian "forest brothers" are proclaimed "heroes."  Below it is an attempt to convey this warped version for the international stage. This is an attempt to make history an instrument to obtain advantages in the sphere of foreign policy, an attempt to perform a new Nuremberg trial. A "Nuremberg number two," but this time against the Soviet Union.

The ministry of foreign affairs of Russia has repeatedly protested against the attempts of the authorities in the Baltic republics to falsify the history of the war and its results. "These attempts not only trample the memory of the fallen in the fight against fascism, but also insult the feelings of veterans of the Great Patriotic War," says the Russian diplomatic service. Moscow intends to stand firm to achieve unconditional condemnation of such actions by the international community. 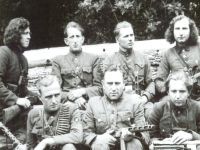 When the war started, the Germans found themselves some over enthusiastic collaborators in the Baltics. Lithuanian youths began attacking Jews in Kovno even before the Germans invaded on 24th June 1941.

For aged survivors interviewed after the fascists in Lithuania marched recently, the most painful symbol was not the swastika. It was rather the white armbands worn by some marchers, celebrating the infamous 'activists' who set the murdering in Lithuania in motion by murdering Jews in dozens of towns before the actual arrival of the Germans. When Nazi forces arrived, 'the white armbands' became Hitler's murderers par excellence.

The flaunting of the armband on the streets of central Vilnius in 2010 is a grievous stain on the entire region. As is this worship of these demons from hell.

During the occupation, the Lithuanian members of the Einsatzgruppe and the Lithuanian Security Police willingly carried out acts of mass butchery. In full complicity with the Nazi SS, the Jewish population saw the extermination of between 135,000 and 220,000 people. Few survived the horrors of the camps at Kovno (Kaunas), Kauen, Slobodka, HKP at Vilna and Prawienischken. Had it not been for the Red Army's intervention and victory, the numbers would have been much higher.

Translated and appended from the Portuguese version by: