We are all Julian Assange

The First Amendment to the US Constitution, ratified in 1789, guaranteed the right to freedom of expression. Wikileaks, launched in 2006, aims to force Governments to be more open, thus operating more in line with the collective will of the people. Julian Assange, its founder, has opened a new chapter in the history of Humanity. 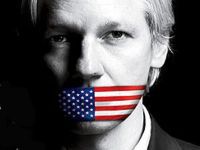 The text of the First Amendment to the US Constitution reads: "Congress shall make no law respecting an establishment of religion, or prohibiting the free exercise thereof; or abridging the freedom of speech, or of the press; or the right of the people peaceably to assemble, and to petition the Government for a redress of grievances". Part of the Bill of Rights, it was ratified by the States on September 25, 1789 and adopted on December 15, 1791.

It would therefore be hypocritical of the United States of America to seek an extradition of Assange, because after all what has he done? Let us separate the Swedish question from the calls to "hunt him down" by Sarah Palin, that screaming ignoramus representing the USA's brain-dead intellectually challenged Right.

What happened in Sweden?

Julian Assange, while in Sweden in August, allegedly shared his bed with two...females... (Miss A. and Miss W.). Members of Assange's inner circle who accompanied him on his trip released the following details to the Press.

Miss A. a spokesperson for the group that hosted the visit of the Wikileaks founder to Sweden, allegedly asked Mr. Assange to go back to her residence. To see her stamp collection? Mr. Assange accepted, a sexual relationship developed and during one of these encounters a condom he was wearing became torn. Several days later, according to the statements, a Miss W., apparently obsessed with Mr. Assange, went to a meeting addressed by him and after loitering outside waiting for him, lured him to her apartment, where they also engaged in a sexual encounter, during which he also used a condom.

The following morning, Assange had sexual relations again with the woman, this time without a condom. They parted on friendly terms.

Increasingly obsessed that she might have contracted a sexually transmitted disease, Miss W. then tried to contact Assange, who had turned off his cell phone, then tried to find other people who had met him, leading her to Miss A. Both women finally managed to get in touch with Assange and requested that he take an STD test, which he agreed to - but it was a Friday evening after the clinics had closed.

Miss W. then, and only then, decided to take the case to the police. Neither woman had filed any case against him and neither did either woman initially wish to press charges. However, the authorities took over.

An arrest warrant was issued for "rape", but a senior prosecutor threw the allegation out claiming there was insufficient evidence, cancelling the warrant but stating that the case should continue as "molestation". Then Miss A. and Miss W. hired high-profile Swedish lawyer Claes Borgstrom, who started informing reporters, taking a case which was originally dismissed into a new dimension.

What was originally a sexual relationship between two consenting pairs of adults, morphed into what the Swedish authorities presented to the British holding Assange, namely three counts regarding Miss A. and only one connected with Miss. W. in which the terms "unlawful coercion", "reluctance to use condoms" and "rape", were referred. The allegations were now that he did not use a condom during any of the relations he had.

Assange left Sweden and came to Britain of his own free will and nobody stopped him leaving the country.

Four months later, and uncannily after Wikileaks revealed it was going to reveal hundreds of thousands of documents relating to the US diplomatic cables - but also, and more ominously, information on the banking system, coming next year - the British Crown Prosecution Service arrested Assange and held him for over a week in solitary confinement, denying him full access to his lawyers, initially denying him bail then setting it at a massive 240.000 GBP, which eventually was put up by a number of public figures. As this article goes to publication, Assange is set to be released from prison, to await extradition hearings, probably later in December.

What happens next depends on a number of fine legal points. Under Section 13 of the 2003 Extradition Act, an extradition can be barred if it can be proved that the motives behind the act are politically motivated. Mr. Assange's lawyers have a lot of material they can use.

What is at stake here is far more than Julian Assange having had sexual relations with two consenting Swedish girls in the Summer. The very time lapse between the issuing of the arrest warrant and the "crime" says all, and coincides with Wikileaks' revelations which have damaged the image of the USA.

What is at stake here is the right humankind has to accountable and open government, policies which are well-meaning and cater for the interests of the people who elected them and not skulduggery, power games and the self-interest for cliques and elitist groups which has taken over, in a worldwide plutarchy of, in most cases, unelected grey bureaucrats who take decisions wholly outside the realm of public knowledge.

This is the world Julian Assange is fighting against and it is the ideal of more responsible, open and accountable Government he is fighting for. These are the aspirations of humankind now at the beginning of the Third Millennium and for this reason, we are all Julian Assange.