The poverty and pettiness of America 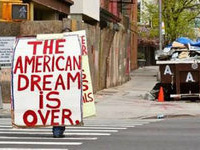 In the United States of America, people work like slaves on plantations. If you do not happen to be a property owner, all you will have to do is either to survive working in the service industry or playing the game of musical chairs for a cubicle (which will be outsourced to India some time next week anyway).

The best thing which you can hope for in the USA is to receive a professional's degree and milk the system for a piece of middle class pie. Even those who make it in the middle class stay just one disease or job loss away from poverty. Your jobs are not protected. Your company is not loyal to you. They will set you against your own colleagues at work, if they need to, and then they will get rid of you. It goes without saying that you do not have a choice at this point: this is the way this system works.

In many developed countries, a higher education is either free or subsidized. In the United States, getting a university degree will give you a debt of over $100,000. You are destined to step into the working world with a massive burden of debt on your shoulders. Forget about having a journey around the world or finding yourself - you have to start working. Otherwise, you will have to watch your credit rating rolling down the hill.

If you are one of the lucky guys, you can find a job that will be good enough to get you a home loan. Afterwards, you will have to spend a half of your life to pay the interest on the loan - welcome to the world of American debt slavery.

Most of your beef that you consume in the USA, has been exposed to fecal matter in processing. Your poultry is infected with salmonella. Your stock animals and poultry are drugged with hormones and antibiotics. In most countries, governments would try to protect their citizens against all this, but in the United States the government is bribed by industrialists to avoid regulations and inspections.

In a few years, the majority of all the produce for sale in the United States will be from genetically modified crops, thanks to the cozy relationship between Monsanto Corporation and the United States government. Worse still, due to the vast quantities of high-fructose corn syrup Americans consume, fully one-third of children born in the United States today will be diagnosed with Type 2 diabetes at some point in their lives.

Of course, it's not just the food that's killing you, it's the drugs. If you show any sign of life when you're young, they'll put you on Ritalin. Then, when you get old enough to take a good look around, you'll get depressed, so they'll give you Prozac. If you're a man, this will render you chemically impotent, so you'll need Viagra to get it up. Meanwhile, your steady diet of trans-fat-laden food is guaranteed to give you high cholesterol, so you'll get a prescription for Lipitor. Finally, at the end of the day, you'll lay awake at night worrying about losing your health plan, so you'll need Lunesta to go to sleep.

All this begs the question: Why would anyone put up with this? Ask any American and you'll get the same answer: because America is the freest country on earth. The country, in which the number of prisoners is larger than that in the 1.5-billion-strong China is the freest? This is not funny.

Unfortunately, the American political process is among the most corrupt in the world. In every country on earth, one expects politicians to take bribes from the rich. But this generally happens in secret, behind the closed doors of their elite clubs. In the United States, this sort of political corruption is done in broad daylight, as part of legal, accepted, standard operating procedure. In the United States, they merely call these bribes campaign donations, political action committees and lobbyists.

One can no more expect the politicians to change this system than one can expect a man to take an axe and chop his own legs out from underneath him.

No, the United States of America is not going to change for the better. The only change will be for the worse. As we speak, the economic system that sustained the country during the post-war years is collapsing. The United States maxed out its "credit card" sometime in 2008 and now its lenders, starting with China, are in the process of laying the foundations for a new monetary system to replace the Anglo-American "petro-dollar" system. As soon as there is a viable alternative to the US dollar, the greenback will sink like a stone.

Meanwhile, Asian and European countries were investing in education, infrastructure and raw materials. Even if the United States tried to rebuild a real economy (as opposed to a service/financial economy) do think American workers would ever be able to compete with the workers of China or Europe? Have you ever seen a Japanese or German factory? Have you ever met a Singaporean or Chinese worker?

There are only two possible futures facing the United States, and neither one is pretty. The best case is a slow but orderly decline - essentially a continuation of what's been happening for the last two decades. Wages will drop, unemployment will rise, Medicare and Social Security benefits will be slashed, the currency will decline in value, and the disparity of wealth will spiral out of control until the United States starts to resemble Mexico or the Philippines - tiny islands of wealth surrounded by great poverty (the country is already halfway there).

Equally likely is a sudden collapse, perhaps brought about by a rapid flight from the US dollar by creditor nations like China, Japan, Korea and the OPEC nations. A related possibility would be a default by the United States government on its vast debt. One look at the financial balance sheet of the US government should convince you how likely this is: governmental spending is skyrocketing and tax receipts are plummeting - something has to give.

Whether the collapse is gradual or gut-wrenchingly sudden, the results will be chaos, civil strife and fascism. Let's face it: the United States is like the former Yugoslavia - a collection of mutually antagonistic cultures united in name only. You've got your own version of the Taliban: right-wing Christian fundamentalists who actively loathe the idea of secular Constitutional government. You've got a vast intellectual underclass that has spent the last few decades soaking up Fox News and talk radio propaganda, eager to blame the collapse on Democrats, gays and immigrants. You've got a ruthless ownership class that will use all the means at its disposal to protect its wealth from the starving masses.

On top of all that you've got vast factory farms, sprawling suburbs and a truck-based shipping system, all of it entirely dependent on oil that is about to become completely unaffordable. And you've got guns. Lots of guns. In short: the United States is about to become a very unwholesome place to be.

This country started with slaves on plantations - this is how it is going to end. They will not be bringing slaves in, though. They already have them.

Based on the article by Lance Freeman

Read the Russian translation on Politonline