Julian Assange is in prison, remanded in custody in the UK after accusations of two sexual assault charges in Sweden. These allegations were made in August, were dropped immediately by a senior prosecutor and were reinvented exactly when the Wikileaks tsunami broke against the USA. What exactly is going on? If Pinochet was released, then... 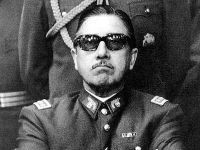 Let us begin by saying that nobody is above the law. OK, sorry. The USA and Israel are in terms of international law...but in the rest of the international community, those of us who pay our taxes and follow the rules get our ears clipped the second we fail to make a minimal fiscal payment, even if the account was sent to the wrong address.

So let us not start this piece by defending Julian Assange if he is guilty of sexual assault against two women, a Miss A and a Miss W...two ladies who appeared willing to share a bed with him, in Sweden. For the author of this piece, sexual violence, rape, sexism, racism and xenophobia are all causes to fight against.

However let us also be sensible. A friend of mine had serious problems in the UK some thirty years ago because a girl aged 14 (who claimed to be 18 but could easily have passed as a twenty-year-old) got him into bed, then claimed he had raped her. He didn't, and forensic science proved him right. Another friend some years later gave a lift to a girl one rainy night...and in the middle of a town she ripped her skirt and panties, ran out of the car and screamed "He raped me!" Fortunately for him, she'd done it before, several times.

This is not an attempt to belittle sexism, sexual assault, battery, gender violence, all of which I spend long hours of my free time fighting against.

But let us apply the same logic to the case of Julian Assange. The cases were brought some months ago and dismissed. Now that the Wikileaks reports embarrass the USA beyond any iota of doubt, the charges are reissued.

What are they? Miss A says he used his body weight to hold her down in a sexual manner. So why was she lying beside him? Did he force her to go into a certain space and then lie on her or did she willingly accompany him to a bed and lie down with him? Miss A says he had unprotected sex with her while she insisted he used a condom. Who is this Miss A? Shouldn't Julian Assange be getting an AIDS test?

Then a Miss W appears saying he had sex with her while she was asleep. So, if she was asleep, how did she know? And what was she doing lying naked beside him in a bed? True, this does not mean that a male and female cannot share a bed, even naked, and respect each other, if one of the parties does not consent to relations. But one thing is consenting to relations, another is behaving in such a way that incentivate them, even without explicit consent.

What is at stake here is rather more than the allegations against Mr. Assange. If he is guilty, then let a court of law prove it and let a reasonable thread of evidence be available for the courts in the UK to decide whether there is any case at all. Until such time as he is sentenced after due process, then he is innocent.

However, this is not just a simple case of extradition to Sweden (which under current laws in practice in the EU, would be difficult for Assange and his team to fight against). Basically, he has already been judged by the public through media reports. It could indeed be argued under English law that the case was now null and void.

His right to anonymity has been denied him, his right to a fair and free trial has been violated, due to the fact that as we saw in the Wikileaks, extreme pressure is borne by certain governments against the judicial systems of certain states. Therefore any decision to extradite Mr. Assange comes outside the normal jurisdictional decisions arising out of European law. Read Wikileaks, and we see the full dimension of this monster.

Coupled with this, is the specter of an eventual extradition to the USA, due to what his website has been responsible for, and we see that the British justice system is once again caught up in a Pinochetgate case. If the dictator Augusto Pinochet was released by British justice, after what he did, then Mr. Assange is going to be extradited to Sweden to face the accusations of two "ladies" who shared a bed with him, as a pretext to be then shipped over to the USA, the Queen of waterboarding, torture and mass murder in medieval-style concentration camps?

Maybe it is time for the people of the world to pull together, because what is at stake here is more than a simple accusation. It is where we are, where we are going and what our rights are, as humankind.

Ladies and Gentlemen, this is not a case. It is a cause. And let us all inform ourselves as to what we can do, and how far we have to go to ensure that the right to free information remains available to all.

Take down Julian Assange, and others will take his place.