Predictably, the England camp has started a post-mortem into where its bid went wrong and why Russia was chosen to host the 2018 FIFA World Cup. Fair enough, to a point. But what is this about insinuations that the system has to change, that England was cheated, that the criteria were cloudy and that promises were broken? How about admitting that England's bid wasn't good enough? 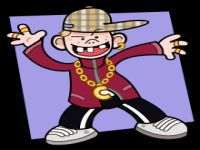 The FIFA shortlist is drawn up after an exhaustive process which looks at the applications, taking into account a wide range of factors, taking into account pre-selection criteria such as the rotation of continents, ensuring that the global interest in soccer is kept at its peak, then during the selection process, focusing on clearly defined rules. So much for the claim that the criteria were cloudy.

The bidding countries had until February 2, 2009 to register their interest in hosting the World Cup FIFA Soccer Championship. It will be Europe's turn to host the Cup in 2018 (2014 will be in Brazil, 2010 was in South Africa and 2006 in Germany), meaning that the bids from Russia, England, Portugal/Spain and Belgium/Netherlands were shortlisted, the remaining bidders vying for the 2022 tournament (which in the event went to Qatar).

There was then an exhaustive inspection process in which FIFA representatives visited the bidding nations, seeing the stadiums, models for projects, gauging readiness and suitability, transportation infrastructures, the ability to manage large groups of fans. All this information is written up in an Inspection Report and this goes to the final stage, the voting process, where the entire Bid Evaluation Report is studied. These take into account a wider range of issues, including operational risk, sustainable human and social development, accommodation, safety and security measures, environmental impact, IT/communications, healthcare facilities and so on.

The FIFA voting members had access to these reports, before hearing a final presentation from the teams representing the bidding countries which expounded why their country should be chosen. Behind the scenes, all the countries involved performed lobbying with these FIFA members, including the UK, which along with its presentation team sent the highest possible delegation, a heavyweight team composed by the future King, Prince William, the Prime Minister, David Cameron and soccer legend David Beckham.

In England, we have Sky News presenters openly postulating whether the decision was purely concerned with football, airing soccer pundits on prime time saying that England's bid was the best, therefore the criteria were wrong and for this reason until the system is changed there is no point in entering another bid. Sour grapes. London's Olympic bid won why? Because of cheating and corruption? 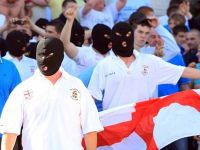 Would it not be more graceful to say congratulations to Russia? And exactly because of these insinuations, let us take a closer look at why England was excluded. As a regular visitor to England, I have quite a lot to say, although I am a non-resident.

The opinions of the Sky News presenters, for one, are totally irrelevant. When will Sky News learn that its presenters are there to present news, not to make snide remarks and pretend they are opinion leaders, much less when they are of the "Hey guys! Are you here to get some revenge for 9/11?" (on the invasion of Iraq) calibre. Sky then aired soccer managers, one of whom spoke about the "dezision" (with a clear "z") when "England's bid was clearly the best", and another who claimed that "People just don't like England any more", both of these along the same lines as those defended by the team leader for England's bid, Andy Anson. His words make stunning reading: "When you have the best technical bid, a fantastic inspection visit, the best economic report and, from what people told me yesterday, the best presentation, it's quite hard to stomach that that seems to count for nothing".

And what about the lobbying? Why did Prince William travel to Zurich? Were the FIFA members to be wowed by an audience with His Royal Highness? Did aides go around asking people "I say, would you like an audience with Prince William? And then would you chaps sort of...you know....er...vote for us?" And Cameron? Was he there to drink orange juice and look silly, hiding behind a column or did he speak about possible trade-offs? If not, why did he go?

While the Russian delegation was charming the FIFA members with flawless English and in some cases French and Spanish as well, apart from Russian, the England delegation wheels out David "we done the job" Beckham, who, we are informed, never practises his speeches. But he doesn't have to, they're always the same: "Well, yeah, you know, you do your best and that, you know, an'...an'...well you try your hardest you know, but well to be honest, at the end of the die, you know, that's football". Innit?

And why didn't the inspection team choose England? Did they have the same experience as I did the last time I travelled there? The second I stepped off the aircraft I was ushered to show my passport to a lady wearing a veil disguised as a headscarf by a gentleman in a turban, neither of whom I could understand, before being told I had gone the wrong way by an obese gentleman of West Indian origin, sprawled on a chair with his legs open and his flies undone.

The ticket machine was broken, the ATM was broken so I had to queue to buy my train ticket, where I was very harshly treated for not knowing the difference between the different modules on offer, before I found myself sitting amid a pile of filth in a train, with papers strewn around the floor, food wrappings, spilt drinks, discarded half-sandwiches with a splendid view of the English countryside through swear words scrawled in graffiti on the windows and sitting opposite a sinister-looking chav with his boots on the seat, oblivious to all around him with a stupid baseball cap turned sideways, his trousers almost falling down, unshaven, unkempt and probably unemployable... Further down, "Colin sh..ts!" among the soccer messages just above the dried coffee (one hopes but wonders) stains on the floor. 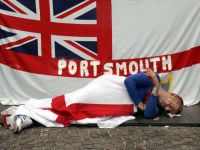 Time to change stations. I asked a train driver whether his train was going to my destination. The answer? "How da f....am Oi sappaused ta f..ing knau?" Welcome to the United Kingdom. Arriving at my destination, the station platform was plastered with piles of human excrement, pools of vomit, discarded fast food and stank of urine. Faeces had been stuffed into the ticket machines. It literally looked, and reeked, as if a herd of pigs had taken up residence there.

And to cap it all, as I neared the end of my journey, I was accosted by a gang of drunken hoodies (true, they tried to be friendly) whose English I could not understand...something about "fag" and "mite" (their gestures seemed to indicate they wanted to smoke pot or wanted a cigarette but the best I could do was say "Sorry, I do not understand your English" which seemed to provoke guffaws of laughter for some reason). (Shrug).

In short, the England bid failed because it was not good enough, because the country has become a pigsty, nobody there seems to speak the English language any more and basically because nobody likes soccer hooligans, who unfortunately seem to have taken the place over. What happened to the British gentleman? The British lady dare not step outside her house after six p.m. 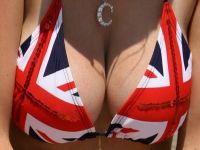 It has become yobland, full of trashy, tacky, garish and gaudy, brassy, slovenly sluts with cigarette ends hanging out the side of their mouths, turning into media starlets through the human reality shows, the TV version of tabloid idiocy which has turned the country into a nation of cheap voyeurs, yelling racist obscenities in the unintelligible tongue the English language has become on that island. These, accompanied by the pot-bellied, disgusting, dishevelled, drunken pigs that sire them and breed the obese, foul-mouthed, smelly and ignorant little hoodlums that hang around in shopping malls mocking, robbing and kicking defenceless old ladies.

Er...no, thanks. Thank God it's an island and cannot infect anyone.