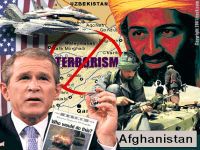 Perhaps not surprising that a UN Ad Hoc Committee to Eliminate Terrorism, created by the General Assembly in December 1996, became paralyzed when trying to reach an agreement on a draft comprehensive convention to eliminate terrorism. Last month, another effort was useless, when proposing a distinction between "freedom fighters" and "state-sponsored terrorism."

The United Nations (UN), to-date, failed to achieve an agreement that allows a comprehensive convention for the elimination of terrorism. Much of the problem is a lack of consensus on the definition of this phenomenon.

When Israeli commandos killed nine humanitarian activists in May, eight of them Turks, in an attack on a humanitarian flotilla that was heading to Gaza, the Prime Minister of Turkey, Recep Tayyip Erdogan, said it was "state terrorism." Even "tyrants, robbers and pirates have their own codes of 'ethics' which does not happen with the terrorists who kill in the name of a Member State of the UN," said Erdogan.

Many artists of international fame such as the British band, The Pixies, and Elvis Costello, responded by canceling their performances planned for Tel Aviv. A leading producer of shows in Israel, Shuki Weiss, said the growing boycott movement represents a "cultural terrorism."

"Music and politics should not mix," he said, while charging imbalances in the Palestinian Campaign for an Academic and Cultural Boycott of Israel.

Perhaps it is not surprising that a UN Ad Hoc Committee to Eliminate Terrorism, created by the General Assembly in December 1996, became paralyzed when trying to reach an agreement on a draft comprehensive convention to eliminate terrorism. Last month, another effort was useless, when proposing a distinction between "freedom fighters" and "state-sponsored terrorism," Ambassador of Sri Lanka, Palitha Kohona, told IPS that "terrorism is recognized by viewing it."

The draft convention submitted by India in 2001 received the blessing of many delegations on an important level. But it became paralyzed on some crucial issues. For example, it was proposed that state-sponsored terrorism or certain acts of a state are included in the document, said Palitha. Many others resist this proposal based on the fact that acts of States are governed by other provisions in existing international law, and therefore it is superfluous to cover this aspect in the project.

In addition, a proposal was made to exclude certain acts of liberation movements in the scope of the agreement provided, said Palitha. But that also found widespread resistance. The proposed new convention sought protection in cases not yet covered by the 13 existing conventions on terrorism concluded under UN auspices.

Mouin Rabbani, contributing editor of the Middle East Report, based in Washington, told IPS that "terrorism" has become a political epithet, designed to put enemies in an unacceptable position, as opposed to a term whose purpose is to define certain criminal acts that violate the laws of war, by which those who commit them are held responsible.

"We can define, inclusively, at least in the Middle East, that terrorism refers to the ethnic condition of those who commit it, as opposed to their actions," said Mouin. "So then we enter the realm of the absurd."

"On the other hand, collective punishment against the civilian population of Gaza, an ongoing act that costs many lives with the approval of the United States and the European Union, is justified as a legitimate anti-terrorism campaign," completed Mouin. Rohan Perera, chairman of the Ad Hoc Committee to Eliminate Terrorism, told IPS that the only way to reach a consensus on this issue is to adopt an operational definition or one under criminal law instead of a generic definition.

The previous approach was followed in the 13 partial conventions on terrorism, and avoids the difficulties of the second approach, which involves excluding certain types of actions, such as those committed by national liberation movements. Thus, the bill contains a definition according to criminal law, said Rohan.

"The question of state terrorism continues to be governed by the general principles of international law, since it is not possible to address this in an instrument of law enforcement that deals with individual criminal responsibility based on a scheme to extradite or prosecute," explained Rohan. Similarly, he said, the acts committed by national liberation movements during armed conflict remain governed by international humanitarian law.

"The negotiations began in 2000 and came close to reaching an agreement in 2001 after September 11, date of the attacks in New York and Washington that left three people dead," Rohan recalled. Since then, there have been few significant advances. Rohan said the talks will resume in the context of the UN Sixth Committee, which will address legal issues.

Asked if some day there will be a comprehensive convention to eliminate terrorism, Palitha replied to IPS "naturally." The international community has repeatedly condemned the use of terrorism as a tool of political expression and for any other aim or purposes, and therefore seeks to address gaps in the existing international legal framework to conclude with an agreement. "It will also seek to send a new, clear message to those who depend on terrorist force to achieve their goals," said Palitha.