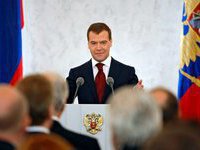 On November 30, Russian President Dmitry Medvedev made his annual address to the Federal Assembly. According to the established tradition, the President has touched upon all aspects important for the country and its citizens: the state of the economy, reforms in the army and the Interior Ministry, improvement in the political system and enhancement of the quality of life. However, this time, the largest part of the President's speech was devoted to the issues of public policy in the area of childhood.

The President started his third address (Medvedev addressed the Federal Assembly for the first time on November 5, 2008) with a discussion of economic indicators. Dmitry Medvedev said that Russia now is moving from crisis response measures to a balanced budget policy. He acknowledged that the budget deficit remains high. Yet, "for it not to become an obstacle to the development, we will be working on reducing it," said Medvedev, adding that such commitments were assumed by all leading countries of the world. Inflation in Russia, according to the President, should be reduced to four or five percent per year in the next three years.

The President also noted that the power efficiency of the Russian economy, despite all the difficulties, should increase by 40 percent by 2020. "This goal is realistic and achievable, I am absolutely sure," he said. Touching upon the economy, the head of state also noted that the rate of insurance premiums for small businesses in the years 2011-2012 will be 26 percent instead of the earlier established 34 percent.

The President could not leave the topic of a comprehensive modernization and innovation without attention. In this regard, Medvedev ordered the government to allocate 50 percent of the budget savings and a part of the additional revenues for modernization.

The leitmotif of the address of the head of state to the Federal Assembly this time was the demographic policy and child care. Having determined that child care is of paramount importance for the country, he proposed to develop a modern and effective policy in this area that would allow overcoming the demographic crisis.

"A society in which the children's rights are protected and their dignity is respected is not only kinder and more humane. These societies are developing better and faster, have a supportive and consistent perspective. I believe that an effective public policy regarding childhood is of vital importance. We need a modern policy which considers the interest of national development," said Dmitry Medvedev.

The President stressed that this was the reason he decided to give this subject the most attention in this address. Modernization, said Dmitry Medvedev, is implemented specifically for future generations. "We should not be ashamed of the country we will give to our children and grandchildren. Yet, of no less importance is the question in whose hands will the fate of Russia fall. 26 million children and adolescents are living in our country, they should fully develop, be healthy and happy to become its worthy citizens. This is number one task for all of us," he stressed.

"We must not have unattended children in Russia," said Medvedev on Tuesday. "In our country, unfortunately, 130,000 children are left without family care, they have neither parents nor guardians, they are denied the most important thing - family warmth," the President said, addressing the Federal Assembly.

To protect children, the Russian President proposed a number of measures. Among them, for example, is the law stipulating criminal liability for selling alcohol to minors, which, according to the President, will be adopted in Russia in the near future. The President proposed to exempt from taxation all the money allocated by charitable organizations for child support. According to him, he expects that the State Duma will adopt a respective law in the near future.

Medvedev also demanded to solve the situation with a shortage of kindergartens in the regions of Russia. All regions, at the request of the head of state, must build new or reconstruct old kindergarten facilities.

Speaking of children and demographic situation in Russia, the President also said that when the third child is born in a family, such families must be provided with free land for building houses. "As far as I know, in the Ivanovo region it was decided to provide free land for construction of residential buildings or cottages to the families who decide to have the third child," said the head of state. According to him, "it is a very proper measure which should serve as an example for other areas." "I consider it appropriate to make this practice widespread," stressed the President. As an encouragement, monthly payments for each child beginning with the third one will be raised to 3,000 rubles ($100).

Speaking before the Federal Assembly, Dmitry Medvedev mentioned the topic of quality and efficiency of public services offered to the public. In this regard, the President gave the government one month to prepare proposals for holding officials accountable for breaking the terms of service. Talking about the fight with corruption, Medvedev suggested that bribes and mediation in bribery should be punished by fines that are 100 times larger than the bribes.

In his annual address, Medvedev announced his decision to remove the head of police department of the Kuban who allowed the murder of 12 in the village Kushchevskaya from his post. The President noted that recently a number of tragic events took place in Russia. "Their reasons include laxity of law enforcement and other government bodies who often are directly merged with criminals," the President said.

The President also talked about the need for further improvement of the criminal law. In this regard, the President noted that "the mission of justice is not only to punish but to correct, so the penalty for minor crimes should not be connected with imprisonment where possible. "This, incidentally, is especially true when it comes to young people, teenagers, those who broke the law for the first time," the President added.

"For a variety of crimes the lower limits of the sanctions will be eliminated, and such penalties as fine and forced labor will be more commonly applied," the President said in his address to the Federal Assembly. In this case, Medvedev noted that "It is important that the courts do not take the upper limit as the sole guideline for sentencing." The bill, which Dmitry Medvedev plans to introduce in the State Duma this week, suggests a differentiated approach to sentencing and eliminates the lower limit of the penalties for a number of crimes.

Referring to the army reform in his speech, the President proposed to merge the Russian air and missile defense next year. "They must operate under the unified management of the strategic command," said Medvedev.

Furthermore, the President said that the world is awaiting a new arms race if we fail to agree on a joint global missile defense system. "In this room, I would like to openly state that in the next 10 years we have the following alternatives - either we reach an agreement on missile defense and create a full-fledged joint mechanism of cooperation, or, if we fail to reach a constructive agreement, begin a new round of weapons race. And we will have to decide on the location of new attack tools," said Medvedev.

In his address to the Federal Assembly, the President has not left unattended the issues related to improving of the political system. Continuing the trend for renewal, Medvedev proposed to make mandatory the use of proportional or mixed electoral system for elections to representative bodies of city districts and municipal districts with at least 20 deputies.

"Political competition at the grassroots level will help strengthen the confidence in the party system and improve accountability of the parties to the voters," the President said, noting that "unfortunately, the role of most political parties in the municipalities is barely noticeable. "As a result, at the local level, not all parties perform the function of All-Russian political organizations," said Medvedev.

In this regard, he pointed out the need to make these parties closer to the everyday life of citizens. "This is another step towards strengthening of the democratic government whose main objective is a worthy life for our people," the Russian President stressed. "Thus, the State Duma elections in December of the next year will take place in presence of political system updated on all levels," said Medvedev.

The President ended his address once again returning to the topic of children who are the main reason of modernization of the state. "We are renewing the country, society, change our lives and are changing ourselves. And by and large everything we do, we do for those we love the most - our children. Because we want them to live better than we do. We want their efforts to create the successful future of our great Russia. I am confident this will happen," concluded Dmitry Medvedev.