Spankin' Sarah Palin: A clown short of a circus

I have already called Sarah Palin a pith-headed bimbo from the back of beyond, in this column. I shall now go one step further. By attacking the democratically elected President of the United States of America at a sensitive time in her country's history, she shows the tact of a boorish drunkard bawling obscenities at a funeral. 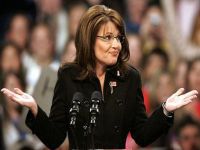 If Sarah Palin is not some kind of a massive political joke in the USA, wheeled out to liven up the political scene from time to time with nonsensical and pastiche (one hopes) displays of sheer and utter ignorance, then it is worrying. It is even more so if anyone other than a manic depressive suffering from a chronic lack of lithium takes this...female...seriously.

Hockey Mum Sarah ex-Governess of Alaska is famous for her shrill shrieking style, displaying a pitifully shallow persona which one hopes is stage-managed to give the rest of the world a good chuckle at the Americans' ability and unique quality to make fun of themselves, a real-life female version of Homer Simpson-cum-Belching Barney at Mo's, giving us ever-more hilarious soundbites as she sets herself up as the dumbest woman on Earth.

Just occasionally, one encounters a bar-room idiot whose party piece is belching loudly before falling backwards off his stool, bouncing off the floor on his backside with a background provided by guffaws of laughter, yet who winks knowingly as he is carried out with his feet scraping along the ground and says "Don't worry son, most of it is an act".

The act. It reminds one of Marilyn Monroe putting on the act of the dumb blonde. But an act it was, a character projected by a shrewd, intelligent and charismatic woman with the ability to invent a persona. Sarah Palin, however, is the real-life thing. And it is becoming patently obvious that it isn't an act.

Sarah Palin, the one famous for ludicrous statements such as "I want to help clean up the state that is so sorry today of journalism. And I have a communications degree"; she is after all someone who "must have lived such a doggoned sheltered life", Sarah "We're all Arizonans now" Palin, cracking down on immigrants when the US of A is after all a country formed by...whom?

And now she turns not only against the fibre and backbone of her country, but against its democratically-elected President, accusing him of being incompetent for not stopping Wikileaks. Where was she and where was her GOP before and during the 9/11 attacks? She accuses President Obama of not taking "steps" to assure the leaks were not published. What "steps"?

Sinister Sarah Palin then goes on to insinuate that she is an advocate of cyber terrorism, questioning "Did we use all the cyber tools at our disposal to dismantle WikiLeaks?" Surely a more sensible question would have been why the material for the leaks was provided in the first place...and this has nothing to do with President Obama, but indeed speaks volumes about the State apparatus itself which goes beyond party politics. Her question also speaks volumes about her own inability to perform logical and strategic thinking.

President Obama after all knows the difference between North and South Korea, he knows that Hawaii is the largest US island and not Kodiak and he does not use the expression "refudiate".

If anything is a threat to the national security of the United States of America, it is this screaming, unrefined oaf with as much class as a searing release of flatulence followed by hysterical giggling at a state banquet. Is this what the people of the USA deserve?

To attack the President of the country at a time when the USA needs to close ranks and stand together to consolidate the enormous strides his intelligent and respectful approach has achieved in building bridges, when her party's period in government bombed them, Spankin' Sarah Palin comes across as a pitifully inadequate anachronism from the times of the Far West.

The United States of America has evolved. She has not.