Tolerance is an act, not a day

Tuesday November 16 was the UN International Day of Tolerance. As with so many other causes, such as Africa Day, Women's Day, the Day of the Child, the subject transcends the need for a date and calls for concrete action on a daily basis by everyone, not opportunists jumping on the bandwagon. 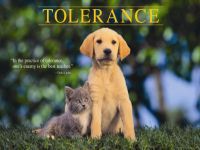 Speaking on the Day of Tolerance yesterday, UN Secretary-General Ban Ki-Moon stated "It is a virtue and a quality, but above all, tolerance is an act - the act of reaching out to others and seeing differences not as barriers, but as invitations for dialogue and understanding."

And just like all the other International days, the act speaks louder than the date. Moreover, the act should be an ongoing policy implemented by governments and practised by civil society not on one date but 24/7, 52 weeks a year.

Let us take Africa Day for example, May 25, commemorating the date on which the Organization for African Unity was set up. What good has it done Africa, for example, having an international day when many of the ills affecting this continent continue on a daily basis, when humanitarian programmes are woefully under-funded, when foreign governments continue to aid, abet, arm and fund splinter groups so as to have greater access to resources, when corruption runs rife because to have the corrupted, you need a corruptor?

So what does Africa Day change? In Africa, apparently, very little. What it seems to serve is the interests of those who once a year wheel out the same old faces, preferably with an African child nearby to pat on the head and jump on the "I love Africa" bandwagon, very possibly to refer to them one day later in derogatory racist terms.

What does International Women's Day change? Every year on March 8, there are appearances from public figures draped around pretty women talking about women's rights and saying how terrible it is that so many girls are out of school, that so many girls are subjected to female genital mutilation, that there are so many cases of gender-related violence, gender insecurity in conflict zones. Yet where are these efforts when UNIFEM makes its constant appeals for aid?

As with all "Days", the result is a lot of hot air, catch-phrases and sound bites which serve the interests of those who use such days to appear and promote themselves rather than improve the lot the subjects of the day themselves.

Racist policies by police forces across the world are well-known and are rife. A person of African or Caribbean origin is far more likely to be stopped and searched than a Caucasian in many countries and the reporting of crimes giving reference to nationality or ethnic origin does nothing other than fan the flames of hatred and increase the potential for compounding the problems affecting our societies.

True, to draw the line between what is to be expected in terms of tolerance by a host community and what might be considered as an act of provocation by a migrant community is sometimes difficult. In the equation which constitutes the human animal, the flashpoint is a constant factor. However, too many times media reporting is biased and engenders an "us" and "them" polarization often based on the reporter's imagination more than reality.

"Moslems in the UK want to ban Christmas" is an example. "They" don't like Christmas because it insults Islam. How many people have heard that in Britain, how many readers are nodding saying "well it is true". Well, it is not true. Most Moslems are perfectly happy to see their Christian neighbours celebrating their religious festivities, just as Christians are not concerned when a Jewish neighbour celebrates a Jewish festivity.

And how enriching it is when all take part, and explain to each other what we are doing, sharing food and drinks, singing songs together, learning recipes and so on.

Perhaps if communities spent more energy in creating communal cultural centres to share ideas and experiences, the hatred would be channelled into love and members of communities would become exactly that - equals living together as neighbours, in friendship. Isn't this a better alternative to what we have?

Yes, it is but it does not work only on November 16.