Appeasement of U.S. military expansionism is a deadly mistake 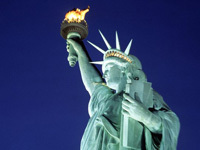 The U.S. has been overtaken by a financial criminal cabal and is ruled by a military-industrial complex and financial capital The representatives of this cabal sit in the White House and legislate in the U.S. Congress. Obama's financial officials are the same Wall-Street types who were responsible for the financial deregulation and other measures which created the current world economic crisis. And his secretary of defence is the same man who occupied that position under the Bush regime which instigated the Iraq and Afghan wars.

The real policy of the cabal which now rules the US is, in the words of their own military doctrine, "full spectrum dominance" of the world, and they are willing to kill as many people, and to invade conquer, and occupy as many countries as necessary to achieve such dominance.

Going along with their aggressive policies, even in a 'diluted' or more 'acceptable' compromise form - as when Russia and China voted to support additional economic sanctions against Iran - is a policy like the appeasement of Germany by Britain during the 1930's:

At that time, Hitler's government was seeking to overawe and occupy one European country after another on various pretexts. Instead of firmly opposing these actions, Britain repeatedly accepted them, most famously when then-prime minister of Britain Chamberlan claimed that he had "brought peace in our time" by accepting the German occupation of part of the nation of Czechoslovakia.

Subsequently, due to his repeated military and political success - and perceiving his potential adversaries as weak - Hitler launched what became World War II, resulting in 50 million deaths.

Similarly, going along with U.S. military aggression today is an act of appeasement. It only encourages them to go further, and to engage in further threats, attacks, and invasions of any country which resists their dominance. U.N. votes or other forms of such appeasement serve as a 'green light' indicating that no opposition, or only token opposition, will be made as they go forward to further threats, sanctions, and military actions and invasions aimed ultimately at full world domination.

Officials or 'experts' in China or Russia sometimes say it is "only practical" or "realistic" to go along with U.S., measures aimed at world domination, because 'we need them' as trade partners or for other reasons.

But if we in Russia, China, India, Pakistan and other emerging countries fail to robustly oppose such U.S. dominance, we will in the end reap a bitter harvest. That harvest is prefigured by the dramatic expansion of Nato into Russias' backyard in Eastern Europe, by the growing military encirclement of China by U.S. military bases and navel activities, and by much else. The harvest will come when, if we fail to stand up now, our turn comes to accept the U.S. dictate or see our countries threatened, sanctioned, or even attacked.

Fidel Castro, in his recent interview with Canadian Global Research, has rightly pointed out that it was absolutely necessary for China and Russia, which are both permanent members of the UN Security council with veto powers, to veto the U.S. sponsored sanctions against Iran.

In addition, he also pointed out that a U.S. attack on Iran would be not only imperialist aggression, but would also endanger the future of humanity on Earth due to the real possibility that the war would escalate into nuclear war.

What's more, he correctly stated that military aggression against Iran would be construed by Moslems around the world as an attack on their faith - and there are 1 billion Moslem followers on Earth.

There is an ancient aphorism that 'Whom the Gods' would destroy, they first make mad." There is a kind of madness which accompanies unchecked power, and the foreign policy makers and military leaders of the U.S. have fallen pray to this syndrome.

Only a mass mobilization of the people - and nations - of the world opposing any further sanctions or attacks on Iran can stay the deadly hand which seeks world domination through military and financial aggression.