Let us be perfectly honest. Nobody ever expected George W. Bush to do anything other than justify his own shortcomings because to apologise or to acknowledge that he was fundamentally wrong in most of what he did would be to recognise that he is an abject failure and always has been. 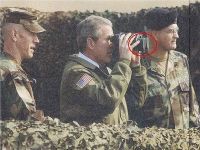 George W. Bush was born into a wealthy family, had everything given to him on a plate, and yet failed miserably from the beginning to the end of his period of administration. Hardly surprising, for here is the man who signed more death warrants than any other Governor in the history of the USA. If Saddam Hussein was hanged for killing 148 people, Bush went four better, sending 152 to their deaths.

After two years of silence, Bush now springs out of the woodwork promoting "his" autobiography, Decision Points (as if he penned the nonsense on its pages himself), a book which starting with its ludicrous and meaningless title, constitutes a tissue of self-justifying bilge from beginning to end, a puerile and vapid attempt at self-glorification by one of the most inept politicians the United States of America, and indeed the international community, has had the misfortune to encounter since the beginning of time.

True, Bush didn't write it, since his "writings" are limited to the realm of incoherent misspelt monosyllables scrawled in cow excrement on the paths of his ranch in Texas, any more than he governed his country for eight long years - the corporate elitists who gravitate around the White House and the AIPAC platform did. However, since Bush defends the actions as his own, let us give him the answer he deserves.

For a start, his claim that he did not really want to go to war in Iraq but was convinced it was the right thing to do by the crowd around him, is, in a word, hogwash. The Bush regime claimed time and again that the Government of Saddam Hussein not only possessed weapons of mass destruction, but that they knew where they were. OK then, where are they?

Secondly, Bush claimed many times that Saddam Hussein was evil, that he tried to kill his father and that regime change was the only step forward for Iraq. Since Bush claimed to be hearing voices from God telling him to press ahead and since his regime was cajoling and bullying member states of the UNSC at the time to try desperately to get the second resolution, which it knew was necessary for an act of war to be legal, it is patently obvious that this statement is a tissue of lies from beginning to end.

Next, his defence of methods of torture. Maybe Bush, Rumsfeld and Cheney should be water-boarded for them to see what it is like. Claiming that using methods of torture saved lives is nonsense and is the type of idiotic drivel one would expect from a merciless murderous maniac with a black-and-white view of the world like Bush and his sadistic and Satanic simpleton cronies from West Texas.

Finally, the claim that it was right to go to war in Iraq is perhaps as predictable as it is absurd. Just like the hysterical giggling one would expect from a micro-cephalic mentally diminished three-year-old with severe cerebral palsy as he hurls faeces at the wall, one is hardly surprised at this type of statement from Bush.

Only in his Maquiavellian, Byzantine and outdated little world of primary values and behaviour is it right to breach each and every norm of international diplomacy, of international law and of common decency, is it right to deploy cluster bombs in civilian areas, torture people, murder, send troops to commit acts of sodomy and sexual depravity which belong to the annals of psychiatry, is it right to hold men in concentration camps without trial and without due process, is it right to steal artefacts from museums, deploy weaponry against civilian structures and civilians, then dole out billionaire rebuilding contracts - without tender - to White House cronies.

Meanwhile, while he was spending trillions of dollars of his taxpayers' hard-earned cash on his futile wars, in which the USA humiliatingly had to pay off the Sunni militia not to attack and the Taliban to escort their convoys, what was Bush doing to avert the worst financial and economic meltdown in recent history?

The saving grace for the people of the United States of America is that the country now has an intelligent, articulate and sensible President from the Democratic Party who in two years has managed to build bridges instead of bombing them, repairing the image of his country and of his people in the hearts and minds of the international community.

I shall not be buying a copy of this rag, not only because I would learn far more from speaking to a drunken beggar but because I do not feel like spending my money to give a pat on the back to a mass murderer, a liar and a hypocrite. Indeed, if someone offers a copy to me I shall rip the pages out of the covers, tear them out of the binding and throw them in a crumpled heap on the bathroom floor beside the toilet.

Actually no, I have more respect for my anatomy.