Open season on Muslims in America 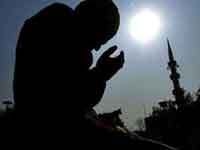 More than ever today, Muslims are public enemy number one. Post-9/11, they've been ruthlessly vilified and persecuted for their faith, ethnicity, prominence and activism. As a result, innocent men and women have been spuriously called terrorists, or charged with conspiracy to provide them material support.

No wonder as an earlier article explained. They've been unfairly portrayed as culturally inferior, dirty, lecherous, untrustworthy, religiously fanatical, violent, gun-toting terrorists. As a result, hundreds have been wrongfully arrested, charged, convicted and imprisoned, guilty only of being Muslims in America at the wrong time. Their treatment represents a clear indictment of US injustice, targeting innocent victims for political advantage.

"Between May 2009 and August 2010 (alone), arrests were made for 19 'homegrown,' jihadist-inspired terrorist plots by American citizens or legal permanent residents of the United States." They were Muslims "susceptible to ideologies supporting a violent form of jihad, a term willfully misused. CRS suggests that jihad = violence, "jihadists,"....illegally supporting, plotting, or directly engaging in violent terrorist activity."

During America's "war on terror," terms like Al Qaeda, outside enemies, jihadists, and Islamic terrorists are interchangeably used to incite fear. Recruited by the CIA and Pakistan's ISI, Al Qaeda or Mujahideen were defenders of Muslim lands against the 1980s Soviet Afghan occupation. At the time, Reagan officials called them a "necessary response" against imperial communism.

In 1998, Zbigniew Brzezinski, Carter's National Security Advisor, confirmed it in an interview, saying:

"....CIA aid to the Mujahideen began during 1980, that is to say, after the Soviet army invaded Afghanistan" in late December 1979. President Carter then "signed the first directive for secret aid to the opponents of the pro-Soviet regime in Kabul. And that very day, I wrote a note to the President in which I explained to him that in my opinion, this aid was going to induce a Soviet military intervention."

He explained further that America had "the opportunity of giving to the USSR its Vietnam War. Indeed for almost 10 years, Moscow had to carry on a war unsupportable by the government, a conflict that brought about the demoralization and finally the breakup of the Soviet empire."

Key is that Al Qaeda was Washington's invention. Reagan called them freedom fighters. Today, under any name, they're "terrorists," innocent Americans wrongfully charged with supporting them, mostly through entrapment stings producing no evidence besides what paid FBI informants say. It's their word against suspects, as well as illegally taped conversations, innocent comments from them made to sound incriminating.

(2) Suicide or Martyrdom" by violent jihad;

(3) "Success of Lone Wolves," unconnected to others; and

(4) "Divergent Capabilities," their experience ranging from little to considerable.

CRS also explained how to combat homegrown "jihad" through counterterrorism, laws like the USA Patriot Act, domestic intelligence, illegal surveillance not called that, and working jointly with state and local authorities, among other ways. It concluded with a national strategy called a "Whole of Government Approach," coordinating across departments and agencies at all levels of government. An appendix then named names, dates, and "plots."

What the report omits says more than it offered. It explained nothing about US imperial wars, state terrorism on a global scale, its toll in the many millions, besides targeted homeland victims - innocent men and women, wrongfully targeted and imprisoned, reports like CRS' suggesting otherwise.

An unsealed October 22 indictment called Al-Shabaab "a violent and brutal militia group in Somalia." More on them below, a group the State Department falsely designated a foreign terrorist organization (FTO) in February 2008.

Charges alleged that Moalin "was in direct telephone contact with Aden Hashi Ayrow," a so-called "prominent (Al-Shabaab) military leader....Ayrow requested money from Moalin, who then coordinated the fundraising efforts and money transfers with Mohamud and Doreh."

The indictment also alleged that Moalin provided a house in Somalia, "knowing (it) would be used in preparation for, and to carry out, a conspiracy to kill persons in a foreign country."

He was arrested on October 31, Mohamud and Doreh on November 1. All pleaded not guilty. They're being held without bail. Moalin's lawyer, Marc Geller, said he's seen no evidence that his client, a local cab driver with no prior record, had any involvement whatever.

About 50 local community members appeared in federal court to show support, believing the three men are innocent. One man, Ali Mohamed, said Moalin taught weekend classes on Islam at a local mosque and is considered a leader of the local Somali community. Apparently it led to his indictment.

"He would tell youngsters to stay away from drugs and gangs," he said. "It's shocking to hear this case against him (and the others). I don't understand why there are people in the street who commit violence while the people who stay in the mosques and pray are being attacked."

Edgar Hopida, of San Diego's Council on American-Islamic Relations, said the arrests put the local Somali community on edge. His organization informs them of their rights, ones very much in jeopardy.

"The Somali community is very fearful that their community is under attack," Hopida explained. "The Somalis who have come here are refugees from a war-torn country and the vast majority" oppose terrorism. In fact, a US-sponsored resettlement program arranged for most to come here, nearly all from the 87,000 community.

On November 3, another DOJ press release headlined, "Two Indicted in Missouri on Charges of Providing Material Support to a Terrorist Organization. A Third Defendant is Charged with Structuring Violations," saying:

"St. Louis resident Mohamud Abdi Yusuf has been indicted and arrested on four charges of providing material support to a designated terrorist organization and one charge of conspiracy to structure financial transactions....Minneapolis resident Abdi Mahdi Hussein was also indicted and arrested on a charge of conspiracy to structure financial transactions."

The unsealed October 21 indictment alleged that "from February 2009 through at least July 2009, Yusuf and a third defendant, Duwayne Mohamed Diriye, a resident of Kenya and Somalia, were involved in a conspiracy to provide funds to al Shabaab...."

Other allegations cited "using fictitious names and telephone numbers to conceal the nature of their activities. Yusuf is also charged with conspiring with Abdi Mahdi Hussein, an employee of a licensed money remitting business (Qaran Financial Express), to structure financial transactions to avoid record keeping requirements."

Charges against Yusuf and Hussein say they solicited funds within and outside the Eastern District of Missouri, then arranged for transfer to Al-Shabaab. Diriye is then alleged to have arranged their delivery.

QFE is a remittance company for immigrants or migrants who wish to send money home to family members. It transmits funds mainly to Somalia, Kenya, Ethiopia, Djibouti, and Uganda through offices in seven states, including Minnesota, home to America's largest Somali immigrant population, numbering over 32,000.

A Profile of Al-Shabaab

An earlier article explained that on the Horn of Africa, Somalia is strategically adjacent to the Red Sea, Suez Canal, and vital commercial waterways. In the north, it also abuts Sudan, a country rich in oil and gas reserves, coveted by America, China, India and other nations.

In December 2006, Washington-backed Ethiopian forces unseated the governing Union of Islamic Courts (UIC), installing a Transitional Federal Government (TFG) in its place. Thousands were killed. Over a million became refugees. Ever since, conflict continued, Al- Shabaab wanting it freed from foreign invaders, much like the Taliban struggle in Afghanistan.

In January 2009, Ethiopian forces withdrew, following an agreement between the TFG and Alliance for the Re-Liberation of Somalia (ARS) - a UIC coalition with other opposition forces. Fighting, however, continued, America backing the TRG/African Union Blue Helmets to keep Islamists from regaining power.

UIC members aren't terrorists connected to Al Qaeda. They're freedom fighters, struggling to liberate their country after years of US-instigated conflict, divisions and instability. Their ranks include moderate and radical Islamists as well as politicians and militants, united for a common cause.

Mogadishu traders initially established a UIC coalition with opposition elements to end clan divisions and bring order to the city's instability. Years of civil war left no stable government in most parts of the country. Al- Shabaab and other opposition forces continue the struggle against the US-installed government, Ethiopian backers, and African Union force. They also call themselves the Mjuahideen Youth Movement (MYM).

According to the US National Counterterrorism Center:

"Since the end of 2006, (Al-Shabaab) led a violent insurgency, using guerrilla warfare and terror tactics against the continued Ethiopian presence in Somalia, the Transitional Federal Government of Somalia, and (NGOs)."

As a result, on February 29, 2008, the US State Department designated it a Foreign Terrorist Organization (FTO) under Section 219 of the Immigration and Nationality Act (as amended) and as a Specially Designated Global Terrorist under Section 1(b) of George Bush's September 23, 2001 Executive Order 13224 (as amended). It authorized ways to disrupt financial support for FTOs by blocking assets of individuals or groups alleged to commit, or pose risks to commit, terrorist acts.