Mid-Terms: Making sense out of madness

It is the fault of the corporate "bought" media that 18 per cent of US citizens wrongly believe that their President is a Moslem, it is the fault of those who manipulate through misinformation, cajoling and fear that the notion exists that a mere two years into his Presidency, Barack Obama has already failed. Far from it... 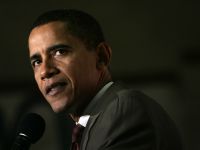 After the careful construction of a nightmare over eight long years by George W. Bush and his regime, which kowtowed to the corporate greed gravitating around the White House in Washington and which dictated US policy at home and abroad, what was Barack Obama supposed to achieve in 24 months?

One look at the mess left by the Republican Administration of Bush, Cheney and Rice, the mind boggles. Abroad, the reputation of the United States of America was in tatters, with an illegal war in Iraq in which hundreds of thousands of innocent civilians were slaughtered, in which the USA and torture had become synonymous, in which the rule of law had been wholly and totally ignored. Worse still, an ineffective NATO campaign in Afghanistan, where billions of dollars-worth of military hardware and software were employed against some 35,000 bearded and sparsely-armed fanatics in the mountains (the Taleban) was doomed to defeat.

Around 1.1 trillion (thousand billion) USD later, the legacy of the Bush regime remains and it is not in two years that Barack Obama is going to address all the ills. That said, he has already performed a monumental task, namely restoring the good name and image of his country in the hearts and minds of the international community. Where Bush bombed bridges, Barack Obama has built them.

Today, just two years into his Presidency, there is a tangible difference in the attitude of the international community with regard to the United States of America and the American people. This is easier to feel, see and measure outside the USA: whereas two years ago, Barack Obama's country was regarded with a sullen hatred even among its closest allies, today, and because of him, only the most diehard fanatics support the enemies of the US and those who wish to bring destruction to its civilian population.

At home, take one look at the mess which Bush and Co. left behind, namely the worst financial and economic disaster the world has ever known, the total discrediting of the monetarist and liberal capitalist systems, upon which the US economy is based, all the seeds sown for a million Americans to lose their homes and millions more to lose their jobs and their futures, while the White House cronies grew richer by the minute...and the monumental task facing Obama is clear.

Anyone who claims that he should have done more in two short years reveals his/her ignorance, at best, or bias, at worst. And the fact is that Barack Obama has already made inroads, taking courageous decisions where nobody dared to tread before him.

He started as a Senator, bringing in a law in Illinois whereby the interrogation of prisoners had to be videotaped, preventing the extraction of confessions through beating; co-authoring a lobbying reform bill law which made politics more transparent and politicians more accountable and playing a major role in legislation which helped the working poor.

He continued as President, promoting social justice bills, bringing dignity to his country's society, for instance bridging the difference between jail sentences for (mainly white) use of powder cocaine and (mainly black) use of crack cocaine while his bill against hate crimes strived to protect American society's more vulnerable members.

Obama's credit card debt relief bill addressed the issue of American families who had fallen into debt, creating alternatives to the easy option of filing for bankruptcy, meaning the creditor institution lost its money and setting rules for a better understanding between the parties from the beginning of the contract.

Barack Obama's financial stimulus bill laid the foundations to prepare the economy for a recovery and indeed, after just two years the signs are there, pointing towards a tangible and sustainable economic recovery which will put more Americans into jobs and keep them there. Furthermore, his new and innovative legislation packages set checks and balances for the financial institutions, making sure the American people would never again be called upon to foot the bill.

The cherry on the cake, no thanks to the Republican Party, was the Patient Protection and Affordable Care Act, ensuring a more reasonable and fairer healthcare system for all Americans, not just the haves.

Despite inheriting a financial black hole and a country whose back had been broken both at home and abroad through eight years of Republican policies, Barack Obama, in just two years, has already made a difference. He promised he could, and he did.

The mid-term election is a perfect opportunity for the American people to endorse all he has achieved and to ensure that the USA does not slip back into disastrous social and foreign policies.