Nestor Kirchner, the ex-President of Argentina who rules the country between 2003 and 2007 has died suddenly of cardiac arrest this Wednesday October 26 at 60 years of age. He was rushed to hospital, where he died after spending the weekend at the family home of El Calafate. 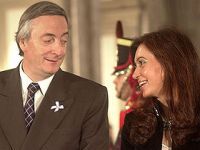 Nestor Kirchner had already undergone two operations for heart problems in February and September of this year to remove obstruction in his coronary arteries. President of Argentina from 2003 to 2007, he passed the Presidency to his wife, Argentina's current President Cristina Kirchner, despite enjoying end-of-term popularity ratings in the area of 50 per cent. He was currently Secretary-General of the Union of South American Nations (UNASUL).

Nestor Kirchner began his political career as Mayor of the city of Rio Gallegos in Santa Cruz Province in 1987, and four years later, was elected Governor of Santa Cruz, a position he held until 2003, winning two re-election campaigns. His popularity convinced him to try for the Presidency in 2003.

His Frente para La Victoria came in second place in the second round of the Presidential election in April 2003, with 22 per cent of the vote, one point behind the unpopular ex-President Carlos Menem, who gave up due to appalling opinion poll ratings.

Kirchner immediately visited President Lula of Brazil and declared his conviction towards a strong UNASUL. His domestic policy was focussed on paying off the entirety of the ten-billion-USD debt to the IMF while keeping the peso low through the action of the Central Bank so as to stimulate exports.

Economic catastrophe suddenly turned into growth, with GDP growth rates of 10 per cent and a reduction of unemployment to 10 per cent. Growth rates were registered for the following years (2003-2007) in the region of between 7.4% and 9.0%. This period of economic stability earned Kirchner's party a victory in the Parliamentary election of 2005.

Passing the Presidency to his wife raised many eyebrows in 2007, due to the fact that Nestor Kirchner enjoyed historically high popularity ratings. There are those who claim he intended to step back in 2011, guaranteeing a further eight years for the Kirchner dynasty. However, Cristina's popularity has taken a sharp decline in recent months due to the unpopularity of the agricultural tax and corruption scandals, which would have affected the good name of Nestor.

Married to Cristina for 35 years, the couple have two children.