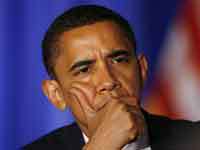 Thousands have died from the drug war along the American/Mexican border. My Mexican friend Carlos Lopez was killed by two Mexican nationals. He was shot in the back of the head. These cowards were illegally in the U.S.. Recently, Tiffany Hartley demanded increased security on the border since her husband was also killed. Surprisingly, liberal ABC news Kevin Dolak and others at least reported the Hartley story.

"Tiffany Hartley, whose husband was shot while the two were fleeing from Mexican pirates on jet skis earlier this month, said the attack should be an example for President Obama on the need for more border security."

"He should wake up and look at what's going on in our backyard," Hartley said, referring to the pirates that attacked her and her and her husband on Falcon Lake at the Texas-Mexico border."

Unfortunately for America, Obama doesn't care. Hartley was not the first or will be the last casualty.Soros wants open borders so Obama can have his votes to keep his power. Obama doesn't care about my friend Lopez and his wife. He doesn't care about Hartley or any American that gets murdered, raped or enslaved. If Obama secured the border than less Mexicans can illegally come to America. Mexicans are votes which means money and power to Soros and his idiot American president.

Obama the lawyer can only bring lawsuits against the most bloodiest state in America, Arizona who is trying to protect its blood soaked border. Story by true journalist Ben Johnson:

"The Washington Post reports today that Eric Holder is threatening to sue America's toughest sheriff, Joe Arpaio if the sheriff does not help the administration continue a second frivolous lawsuit against him"

"We were the first news outlet to report the Obama administration's decision to take Arizona before the UN Human Rights Council. CNSNews.com Penny Starr interviewed Sheriff Larry Dever of Cochise County, Arizona, about the development; his fearless comments are below. As UN bureaucrats from foreign nations - some of them human rights abusers - judge the people of Arizona, lawmen like Dever, Joe Arpaio, Paul Babeu, and countless others whose names we will never know fight to keep Arizona safe from a crime epidemic. For a brief glimpse of how bad things are, watch our previous video of the day about conditions in Cochise County: "A Day on the Border."

Obama and Holder have never been to the border but the blood is now on their hands. The Sheriff has repeatedly invited Obama to see the war and human smuggling. Since Obama is useless the police have started a foundation to raise money for body armor and assault rifles against the drug gangs Even on the Texas border the Mexican investigator's head was decapitated and sent to the Mexican military as a warning to both Mexico and the U.S.. CNN reports. . I doubt selfish Obama has even seen anything like this:

"War, drugs and human slavery on the border".

Obama is at 37% approval rating. The lowest in his career.
News from Ben Johnson, Floyd Reports:

"In a desperate push to keep the Senate in friendly hands, Barack Obama took to the airwaves of Univision Radio on Monday and encouraged Hispanic voters to join him in his plan to "punish our enemies." It appears Hispanics have sunk to the challenge. Among the most motivated members of Obama's nightmare coalition are those who have no right to play any role in the American political process, or even to be in this country, generously financed by Democrats and their political allies."

"Last Thursday, Obama campaigned for Democratic Senator Patty Murray in Seattle, and across Oregon, delivering a speech noted for its fear mongering. The Associated Press reported Friday that "dozens" of illegal immigrants are crisscrossing Seattle to campaign for Democratic U.S. Senator Patty Murray. Dozens is putting it modestly. All told, "About 150 volunteers rolled out in nine cities across Washington this past week, knocking on 3,000 doors." AP credits the pro-illegal immigration organization One America Votes with launching "one of the largest get-out-the-vote campaigns in the state on behalf of Democratic candidates."

Obama does not care about the Hispanics he gives speeches to. He has done NOTHING about the poor immigrants from Central America who are killed by the drug gangs trying to get here. He does not care if several Mexicans are found dead in a trailer or boxcar by "coyote" smugglers who take their money and leave them for dead. If he did care he would secure the borders and initiate legal work programs that allowed Hispanics to work in the U.S.. Like his mentor Soros, Obama created only chaos.

At the beginning of the 20th Century when another gang headed by Pancho Villa terrorized the border, General "Black Jack" Pershing was sent along with Patton to stop the murder, rape and robbery along the border.

Obama will not do anything but sue America because he is only a lawyer. He would rather have American troops in Afghanistan than have them protect Americans here. He wants non citizens from Central America to vote in the USA for his agenda while his Hispanics are being slaughtered by drug gangs. Does Obama address the sufferings of the Hispanics? Of course not! He demands Hispanics join him and "punish our enemies."by voting against the Republicans. If Velma Hart is not happy what makes Obama think the Hispanics are happier? They could insult him in Spanish and he would never know.

To help" Obama the Scum", judges in America are ensuring people from other countries can vote.

"The Ninth Circuit Court of Appeals has overturned Arizona's requirement that people show proof of citizenship to register to vote.

The split decision by a three-judge panel determined that the requirement to show proof of citizenship - passed by voters in 2004 - is not consistent with the National Voter Registration Act
Secretary of State Ken Bennett said the state plans to appeal the ruling, "I think it's an outrage and a slap in the face of Arizonans who are concerned about the integrity of the elections."

Spanish in the voting booths.

I could not believe what I was hearing when I went to vote yesterday. I heard "Spanish" in the voting booths. There were people helping Hispanics understand how to use the voting machine. The voters could not speak English so there were helpers speaking Spanish to them. I guess if I go to Mexico I could vote and ask for an interpreter too and they would be so happy to assist. Reality check: Mexico deports people who are illegally in their country.

Mexican President Calderon: We Fine and Deport Illegals, Too

If you cannot speak English how can you know the truth in a country where English is mostly spoken? It's hard enough for a native English speaker to extract the truth from these con men and investigate the truth. If all the English stations are not enough to get the truth how can a few Spanish stations help?. I am sure those who only speak Spanish will easily accept Obama as a man of truth. Obama proclaims, "I care about you because I am black and the other guys hate you. Vote for my Democrats!

My murdered friend was from Mexico but he was in America legally. He was ambitious and he learned most of his English himself. He was a hard worker and wanted the best for his family. He could not understand why most of his own people would not learn English. He always asked me questions and wanted to improve himself. He knew I spoke other languages like Russian and Spanish but when I spoke to him in Spanish he insisted I speak English to him. His strong will drove him to succeed. He said he was an American.

Obama in office means only death. Not only to my friend but to Tiffany's husband and other tourists. Let's not forget the thousand of innocent Hispanics who were killed along the border. The families of the slain will never get help from Obama and the US Department of Justice. Attorney General Eric Holder has made the Justice office into a joke and is another clown in the Washington circus. Even the FBI could care less. The CIA is more interested in starting trouble for Russia in Georgia and the Ukraine.

You can bet Obama doesn't care who gets killed including his voter base. He'll only talk to the living. Obama's actions translate into,

"All you illegal Mexicans, Colombians and other Hispanics can vote for my Democrats this election.