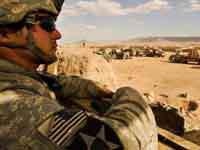 As of 11 October 2010, 23 contractors had expressed an interest in running the US Army's Human Terrain System and getting a share, or all, of the $7 million that comes with a contract award.

Within that group of 23 contractors are some that have already had extensive experience with the US Army's Human Terrain System and its former principals Steve Fondacaro and Montgomery McFate.

Observers are concerned that positive changes apparently afoot with the US Army HTS will be rolled back if the US Army ultimately lets its business to organizations with personnel who have been in the midst of the troubles that plagued the earlier version of HTS.

A Brief Rant Due to Exposure to HTS for 2.5 Years

There is no questioning the validity of the need for a military biased geospatial cultural analysis program that assists US warfighters in their efforts to pacify local populations or improve the speed and accuracy of the kill chain. That effort does not require the use of PhD's from colleges and universities. Further, it seems outlandish to pay $250,000 for an inexperienced (5 months training usually truncated) social scientist to operate in a combat zone.

Why push all that cash to contractors when the talent to divine the cultural landscape exists within the military itself. If after a decade of war in Iraq and Afghanistan (and more on the way in Pakistan, Iran, Mexico-well, Hell, everywhere), the political and military leadership hasn't figured out the human terrain they wish to control, then the questions become: Are the President and SECDEF and their subordinates that incompetent? Are the hundreds of military-university human terrain/behavioral analysis efforts simply jobs programs and a way for the military and intelligence functions to tunnel into academia (just as they have done with the new breed of war journalists in the MSM or places like Wired)?

Why the constant hue and cry that the human terrain is so complex that no one can figure out?

Hell, the good Christian folks over at the Joshua Project have one Hell of a cultural/geo-name, quasi-geospatial database. They have figured out where in the world the heathen non-Christians are and they've done one Hell of a job at it: ethnic tags, language, maps, etc. From that database, Christian Soldiers are sent off on their missions of conversion already understanding the human terrain. Wait! Hell! Isn't this the mission of the USA? Is it not to convert indigenous populations to concede and to accept the American way of life or at least not get in the way of it?

At any rate, many observers are losing sleep over the prospects of a sequel to HTS I at the hands of some of the organizations listed in the "sources sought" list.

"McNeil and Glevum....Not going to sleep tonight! The companies listed look like various circles of Dante's Hell," said one source.

Syzygy's Lett-Smith [currently not listed] was kicked out of AFRICOM for her unprofessional services. Steve Rotkoff [former DPM at HTS] while at HTS had a number of IG [Inspector General] issues."

And then there is Glevum which apparently some find "creepy".

According to sources, "Glevum is beyond creepy---it's crooked. Some of its people were part of that Lincoln Group fiasco in Iraq a couple of years ago. Glevum is just another front company. They have bilked the government and especially HTS out of tens of millions of dollars. Their whole Social Science Research and Analysis/SSRA scheme [allegedly] used fraudulent data and then sold it on the street. The sad thing is that the Gallup organization has picked up some of Glevum's employees in Afghanistan so the same masquerade of data is now affecting US policy there. Gelvum hires so-called local experts to do surveys, focus groups etc. It looks all rather polished on PowerPoint but ask any former HTT member who has seen Glevum products what they think."

Glevum was apparently mentioned in the US Army's AR 15-6 investigation. But as one source pointed out, "Glevum has connections in high places, unfortunately."

Other competitors on the "sources sought" list know the score.

"We are keeping an arm's length relationship," said one source.