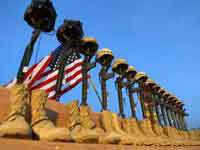 What motivates these people to risk their lives, their freedom and their fortunes by publicly stating their position against a US President?

It is their sworn duty.

Upon entering the service of the American military, everyone must take this oath:

The oath of an OFFICER of the United States Armed Forces, is as follows:

"I, __________________, having been appointed an officer in the Army of the United States, as indicated above in the grade of Major do solemnly swear (or affirm) that I will support and defend the Constitution of the United States against all enemies, foreign or domestic, that I will bear true faith and allegiance to the same; that I take this obligation freely, without any mental reservations or purpose of evasion; and that I will well and faithfully discharge the duties of the office upon which I am about to enter; So help me God."

Notice that for an Officer, there is no "promise to obey the orders of the President".

More can be seen here: http://www.history.army.mil/faq/oaths.htm

The question is: Are these men committing Treason or Mutiny?

Mutiny is described in Merriam Webster's Dictionary as: Forcible or passive resistance to lawful authority especially concerted revolt (as of a naval crew) against discipline or a superior officer.

And they define Treason as: 1. The betrayal of a trust. 2. The offense of attempting by overt acts to overthrow the government of the state to which the offender owes allegiance.

It is looking more and more that Obama is not a lawful eligible President. And no President is "the government". "We the People" are THE government. The President is just part time hired help.

Commander Charles Kerchner, through his attorney, Mario Apuzzo, has filed a lawsuit against all of the US Congress, Dick Cheney, Nancy Pelosi and Obama for violating the US Constitution in certifying the Electoral College votes for Obama's favor.

Lieutenant Colonel Terrence Lakin has refused to be deployed until he sees proof that Obama is an eligible President. He is now being Court Marshaled, with a military Judge telling him that he can not see, nor present evidence pertaining to Obama's eligibilty to be President, because Colonel Denise Lind ruled, "It may embarrass the President".

Of the 100 or so legal actions against Obama to prove he is eligible to hold the office of President of The United States, most are dismissed without any trial, without any hearing, without any evidence presented by either side, never being judged on the merits of the case.

Instead, Judge after Judge says, "You don't have "Standing". It is none of your business if Obama is eligible or not."

One Judge's excuse was, "This has been tweeted and twittered on the Internet". The Judge knows that the Internet is not a realm of unadulterated truth.

And it is not just legal actions against Obama personally. There are dozens of legal actions against his policies, such as Health Care, closing Chrysler dealerships, Gulf oil spill and many other totally un-American policies. Policies that most Americans were taught are repugnant to a free people.

Attorney General Kenneth Cuccinelli, on behalf of the Commonwealth of Virginia, filed suit against Health and Human Services Secretary Kathleen Sebelius directly after the Health Care legislation was passed by Congress in March 2010.

20 individual states filed a similar lawsuit led by Attorney General Bill McCollum of Florida. In Attorney General Kenneth Cucinelli's case, Federal District Court Judge Henry E. Hudson has ordered a Motion questioning the legality of the Health Care Bill because it was signed into law by someone (Obama) who is ineligible to do so. The question of Obama being eligible to be the President is based on Obama's refusal to provide verification that he is a Natural Born Citizen as required by the US Constitution.

And that question has finally, after dozens of denied legal actions, been made a part of a valid case in Federal Court.

American citizens and military officers from Coast to Coast are told they have "No Standing" to question Obama's eligibility to be President.

What is this new legal buzzword, "Standing"? According to www.FindLaw.com it is: The status of being qualified to assert or enforce legal rights or duties in a judicial forum because one has a sufficient and protectable interest in the outcome of a justiciable controversy and has suffered or is threatened with actual injury.

America is being decimated by a foreigner, acting as a President, and the Federal Judges want to say that an American citizen has no "Standing"?

In the matter of Obama's eligibility, there:

Consider this: If none of the cases asking Obama to prove he is eligible have "Standing", why is a Federal Judge and Obama's Department of Justice allowing 11 foreign Nations to join a lawsuit against the State of Arizona?? NONE of those Nations are... residents of different states and NONE of those Nations has suffered or are threatened with actual injury.

Regarding the current cases pending in the Supreme Court of the United States, US Supreme Court Justice Clarence Thomas is on record answering a question about Obama's eligibility, "We're evading that one."

We are witnessing corruption at the highest levels of government.
The military officers listed in this report are attempting to correct that corruption.
Is the situation so serious that America may experience a "Military Coup"? Under normal circumstances that would be a delusional consideration. America is not a 3rd World country. Our Constitution allows for a "peaceful revolution" every four years.

But, under present circumstances, with an illegitimate President who has spent nearly $2 million to keep his citizenship secret, with a Congress ignoring Constitutional requirements to certify Obama's Electoral Votes, with a Department of Justice attacking an individual State attempting to enforce Federal Immigration Law and allowing 11 Nations to join in that attack, with Federal Judges across the country resorting to the illicit reasoning of "Standing" to prohibit questions about Obama's citizenship, with a Supreme Court whose job it is, to consider cases before them, and instead is proudly "evading that issue", with certain factions of the military illegally and unconstitutionally attempting to silence any questions of Obama's eligibility, with record unemployment, with record foreclosures, with record poverty levels, and with Obama going out of his way to insult every World leader he meets, there are only three options to restore the operations of the American government to it's rightful owners:

In 1934 Colonel Smedley Butler http://en.wikipedia.org/wiki/Smedley_Butler was asked by extremely anti-American forces to amass an Armyof 500,000 soldiers and forcefully take over the sitting government, including President Franklin Roosevelt. Then, like now, their own arrogance was their downfall. Who but an idiot would ask the most highly decorated United States Marine Corps Officer in history to use weapons and soldiers to destroy his own government? The same government that granted them the ability to amass the wealth that they could not have acquired in any other Nation or any other time period in history.

Why were those traitors not arrested and executed? Some stories say it is because Franklin Roosevelt, who was a Democrat, did not want to tarnish the reputation of Democrats, being as the conspirators were Democrats.

In the summer prior to the election of Obama, there was perhaps 1 or 2% of the population questioning Obama's eligibility. Obama said that that issue would go away 2 weeks after he was elected. However, 2 years after that election, over 65% of the American People question his eligibility and that number is growing.

If Obama is not eligible to be President, ALL of his Executive Orders, Laws, Treaties and Agreements can be reneged on by future administrations and by foreign entities. ALL orders being given to the United States military are unlawful orders and no soldier or officer has the duty to obey them. In fact, any and all military personnel who do obey his orders are subject to immense criminal punishment and possibly can be charged with and prosecuted successfully for War Crimes and Crimes against Humanity. Their duty is to not obey unlawful orders.

They are sick of billions or trillions of their dollars going to reward the crooked banks and other financial institutions who stole from them to begin with. They are sick of being punished for the crimes of the politician's friends and campaign donors.

Obama and his supporters are so far detached from reality, they have absolutely no concept of what 100 million angry American's are capable of inflicting upon them.

IF the military of America does not eliminate the corrupt Obama regime, the American people can and will do to them, far worse that the military would do.

The World has learned the hard way, that when America sneezes, their Nation's catch a cold. If hard, fast and brutal remedies are not applied to the Obama Flu virus, America and other Nations will cease to exist as we know them and hundreds of millions of this Earth's population will die a miserable death, far worse and farther reaching than the Black Plague of the Middle Ages. Poverty kills. Massive poverty kills massively.

In America, the opposing forces are not Liberal vs. Conservative or Right vs. Left or Democrat vs. Republican. The effective forces are only American vs. Anti-American.

If the American forces had one message to deliver to the Anti-American forces, it would be this: "We have been tolerant of your actions. We have been respectful of your Constitutional Right to Free Speech. We have been such, not solely because we are gentle people and respect your Rights, but also, because of our Biblical principles. The Bible says, "Know thine enemy." How could we have known you if we did not allow you to speak? And this is why you don't know us and don't realize what we are capable of, because you have attempted and succeeded in many areas to silence us. In public maybe. And now, the bell can not be un-rung. You have spoken and We the People know you. And you will be destroyed as We the People have destroyed you many times in the history of America."

Here are some links to just a few of the hundreds, maybe thousands of sites of organizations that are fighting Obama and his policies.

And just when we thought there were no protest songs since the Vietnam days, Bruce Bellot spells it out: "We Ain't Going Away" http://www.youtube.com/watch?v=G7xPMq45p6Q

This one by Jeremy Hoop, calling for Americans to rise up: http://www.youtube.com/watch?v=PX7xjAs1UuA&feature=player_embedded

And one of our old favorites, Lynyrd Skynyrd:
http://www.youtube.com/watch?v=-KVmRtEO18k&feature=related

When it is all added up, when it is all understood by the American people, there is one solid truth that will become self evident: The forces controlling Obama can not legally execute us for what we are doing, but We the People can hang them by the neck until dead, for what they have done and are doing.