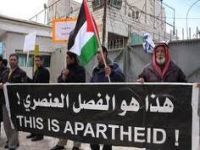 After the attack on the Free Gaza flotilla, Moratinos went so far as to say that this was "a good opportunity for peace negotiations." This opportunist thinking was surprising, as well as being the statement of someone who has not been able to move anything in this so-called 'conflict."

For years, we have witnessed war, the siege of Gaza, the West Bank barrier construction, the expulsion of dozens of families in Jerusalem and the punishment of the Palestinian community in the State of Israel through the kidnapping and the sentencing of Ameer Makhoul, social leader, in whose mirror the rest of the Palestinians in Israel see their identity kidnapped and prohibited.

Since 2000, about seven thousand have died and more than 170 Palestinian activists from various social movements have been condemned. Gaza remains under siege for three years, and the situation of those living in the West Bank is no better, nor that of the Bedouins of the Negev who see that their villages are being destroyed every so often. There is, finally, the situation of refugees in camps in Lebanon or Jordan or the Palestinians who fled the war in Iraq and find no welcome, no quietness anywhere in the world.

The passage of time does not lessen the hardness of their lives. Moreover, the Israeli government masks their fascism with talk of democracy while on the ground, it applies its project of 'Greater Israel' which has no place other than for those that demonstrate the purity of their ancestry.

We must therefore strengthen our positions, reflect on the areas of organization, the objectives that we must make for what they ask of us today from Palestine.

It is clear that successive Israeli governments have increasingly responded harshly to any claim of liberation, and they want to eliminate any independent civil movement that has force in Palestine. Dozens of civic activists in Palestine and Israel have been arrested and charged for simply standing up for civil rights.

It is obvious therefore that the need to organize solidarity abroad is increasing and that this organization has to focus on political demands. We, from the outside, will also receive the 'contempt' of the State of Israel, as it is legislating to declare as enemies of the state anyone who supports the boycott. It is likely that what we do is going to be on the outside, we are not admitted by any of its borders "for security reasons" and that foreign NGOs that have offices there will see their work obstructed.

It is inevitably subject to the example of South Africa. There, as in the State of Israel in the 50s, laws were imposed controlling the possession of the land, freedom of movement of citizens and, indeed, the rights of citizenship. The extension of such legislation up until today is a disgrace to humanity and a moral affront. In addition, for years the Israeli state declared that it was they who are in the "front lines" and that they "legislate" for the good of humanity. Today it is not permissible under international law, nor will it be in the future. In this way, we better enforce the boycott and strongly develop in all areas before it is too late.

The boycott must be a kind of 'Fourth Internationalist Intifada," a moral obligation, an inescapable way, a robust response to the reduction of freedom in Palestine and the ongoing constraint on social movements.

That is why we must strengthen the structures of the Palestinian solidarity movement, to seek membership of social organizations, good people, trade unions, municipalities, etc., to join this campaign without hesitation.

This should be directed at any person, entity or organization that tends toward 'normalization' of relations with the State of Israel. There is no normality in apartheid and the ongoing war, the destruction and the occupation. Israel must understand that it never will be a free state when it is built on the ashes of another people. And also understand that there are many citizens in the world willing to not forget these crimes, as they are and will be organized by the moral and ethical duty to help the emancipation of the Palestinian people.

(*) The author has traveled many times to Palestine. Currently, the Israeli state prohibited her from entering Gaza. She is active in Al-Quds Association for Solidarity with the Peoples of the Arab World.