Who's Your Daddy? - What is behind how most people vote?

"The average man doesn't want to be free. He wants to be safe."
H.L. Mencken

I don't know who played in the Super bowl this year. I don't even know when the Super bowl was or where it was. I once scheduled a seminar at a church for the Sunday evening of the Super bowl and didn't find out until the following day why no one showed up for our usually well-attended events. I almost never know who is playing in the World Series. When Brokeback Mountain star Heath Ledger's death made the headlines, I had never heard of him. 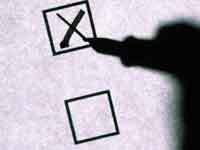 Football fans, baseball fans, and movie fans could scarcely imagine that there are millions of people who don't know anything about these three popular activities. Many more people keep up with the news about these activities than keep up with political news. Sure there are political "fans," but they are scarce compared to sports fans. Pew found that seventy eight percent knew who Payton Manning is (I don't) and 73% knew who Beyonce is (I don't). But only twenty one percent knew who Robert Gates is.

Only about half of Americans can name the Vice President. When asked a direct question only 37% of people know who their state governor is. That number increases to 65% when the correct name is given in a multiple choice question. Even fewer can name their U.S senator or congressman. When it comes to State Representatives the figure falls to about 20%. And name recognition is the American public's strong suit. Even if they could name their representative, when asked to identify two issues the politician stands for, the percentage drops to only 15%.

When they are asked if they know what political party their representative belongs to, a whopping 68% say they don't know or aren't sure. But wait, it gets worse; Three quarters of Americans can correctly identify two of Show White's seven dwarfs while only a quarter can name two Supreme Court Justices. According to the poll by Zogby International, 57 percent of Americans could identify J.K. Rowling's fictional boy wizard as Harry Potter, while only 27% could name both of their U.S. senators. Only 42 percent of those surveyed could list the three branches of our government. But seventy-five percent could name the Three Stooges.

One reality TV show recently interviewed twenty-something models. They didn't know who Condoleezza Rice is and one of them thought George Bush was Vice-President.

All of these people are eligible to vote!

Most folks have no idea what issues are supported by the two major parties. Even when it comes time to vote they vote for the "person" and can not tell you what the platform of the party might be. People vote for who they like. So, the political "fans" are flabbergasted that someone like Rudy Giuliani or John McCain can be elected to represent the Republican Party.

A clue was presented that must have puzzled most political "fans." Remember when the electorate didn't react negatively to Rudy Giuliani's comments about illegal immigrants not being illegal? His numbers stayed at the top. Rudy's national polling numbers didn't change because people found out he favored gun control, gay rights, or dressed in drag. It wasn't until the public found out that he cheated on Mom, broke up the family, married the other woman, and his kids hated him, that his numbers went down. He was a bad Dad!

What is the human motivation that allows people to overlook "issues" but rather choose a politician for his personality traits? A partial answer to that question was provided by Erich Fromm in his book "Escape from Freedom." Fromm received his PhD from Heidelberg in 1922 and began a career as a psychotherapist. He moved from Germany to the United States in 1938, giving witness to his love of freedom. Freud thought human personality was determined by conditioning having an effect on biology. Marx saw people's lives as determined by their society and economic systems. Erich Fromm challenged these two reigning intellectual systems of his time with the idea of freedom. Fromm originally wrote "Escape from Freedom" in 1941 to explore the psychological reasons for the success of Nazism in Germany. If one were to pair this Fromm classic with Eric Hoffer's 1951 bestseller "The True Believer," a rich understanding of human political behavior would emerge. Fromm makes freedom of the individual a central characteristic of human nature! Hoffer documents the evil that is endemic to mass movements. One might think that these two concepts are held over against one another in antithesis, but they actually reinforce one another.

A little bit of history is required to understand this. One example of lack of individual freedom is represented by animals, and humans who have not transcended their animal nature and are controlled by a Freudian biological determinism. Animals and unenlightened humans don't worry about freedom; instincts and conditioning are the determining factors. Such life forms accept what life offers and mostly adjust to whatever reality they inhabit.

So for most of human history there was very little individual freedom and there were very few mass movements. This simple life began to be transformed when people started to see individual humans as being important to the universal scheme of things. First came the Renaissance, and then came the Reformation which introduced the idea of each of us being individually responsible for our own soul's salvation behind the rallying cry "Every man his own Priest." And then came the overthrow of kings and democratic revolutions.

Now we were expected to govern ourselves, and we all had a hand in determining our destiny and making collective policy! So the idea of the individual, with individual thoughts, decision-making authority, personal emotions, moral conscience, freedom, and intimidating responsibility came into being. But with individuality came isolation, alienation, and bewilderment. Freedom is a difficult thing to have, and Fromm believed that when we can, we tend to flee from it. Escaping from freedom is now a primary motivating factor of our species. Because the need to escape from individual freedom emerged in human consciousness, mass movements began to appear in human society. Fromm sheds light on the dynamics with these two quotes:

"The person who gives up his individual self and becomes an automaton, identical with millions of other automatons around him, need not feel alone and anxious any more. But the price he pays, however, is high; it is the loss of his self."

"This loss of identity then makes it still more imperative to conform, it means that one can be sure of oneself only if one lives up to the expectations of others. If we do not live up to this picture, we not only risk disapproval and increased isolation, but we risk losing the identity of our personality, which means jeopardizing sanity."

Erich Fromm can tell us a lot about what is behind how most people vote. He makes the point that most people are terrified of being an on-their-own, take-care-of-themselves, free, adult human being. So, we attach ourselves to surrogate family units and surrogate parents to escape from our freedom. That translates to belonging to and becoming psychologically dependant organizations as diverse as the company for whom we work and our boss, to the church we attend and our pastor, and the political party to which we belong and the parent figure who gets our vote. Identifying with the group becomes our new collective identity, and we surrender our individual identity and freedom.

Ask any pastor, teacher, psychotherapist, supervisor, or elected official and they will be happy to confirm that the people they deal with are all trying to work out their childhood agendas on any available authority figure.

Some of us want a ‘sugar daddy' and a ‘sugar family' who takes care of us, and we cede our personal power and freedom to this Democrat Parent/Party who promises security. The details of politics and policy positions pale into insignificance when compared to the need to escape from personal freedom and responsibility.

Some of us want a ‘strong daddy' who will protect us from danger and who expects us to be strong as well, and we vote for a Republican Parent/Party. We need to belong to a strong family with a strong leader so we will be safe. And once again, the details don't really matter that much.

Conclusion: Some voters still embrace their personal freedom and the responsibility that comes along with it. They study the issues and they vote on the issues. But sadly, they are a distinct minority. Don't expect people to vote on issues. They almost never do. My guess is that more people will vote on how the candidate looks than what the candidate thinks. They vote for whoever meets their personal psychological needs.

Rev. Sam Sewell is an ordained Christian clergyman, a psychotherapist, a member of Mensa, a U.S. Navy Veteran, and a Member of the Association For Intelligence Officers. He is a frequent commentator on religious and political issues.