Statement of the FARC-EP 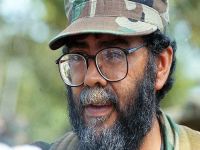 The people of Colombia and the world observe the macabre triumphalism and warmongering euphoria of the Colombian ruling class, a fact clearly reflected in their scheming press. They diligently produce special editions, not to deplore violence and cry for peace, as demanded by Colombians, but to sing about a false and successful annihilation of the insurgency.

Government spokesmen and analysts in their pocket nourish the claim for half a century that has nursed the landlords and the corrupt ruling class that governs: militarily destroying the insurgent rebellion. How far they are from reality in the way they represent the FARC-EP in Colombia, and its revolutionary symbol of resistance, that today guides and spreads even beyond Latin America.

We know that the regime, perpetrators of the war, don't think even for a minute think that their cluster bombs can reach their soldiers and policemen who stand as our prisoners of war in the jungle. Nothing will stop them from launching their fierce bombing, even killing their own men who worthily defended their policies.

This is the violent and exclusionary character of the regime that we face. Despite the ups and downs of the confrontation, we will continue to have, as we do today, the popular support of the common people that enhances the guerrilla resistance. That's the secret that propels us forward both in the jungles and the cities of Colombia.

While there is injustice, displacement and exile, hoarding land and riches, drug gangs and paramilitary co-governing, impunity, corruption, extreme poverty, lack of guarantees to participate politically through peaceful and democratic means, while there is loss of sovereignty and plunder of our natural resources, genuine seed still appears ceaselessly for the existence of FARC-EP.

Nevertheless, we call for an opportunity for peace, not surrender, as the obstinate and stupid regime thinks. What we are asking has already been communicated clearly by our commander Alfonso Cano: the only way is the political and peaceful solution to the social and internal armed conflict. We are and will be a determining factor, other strategies only help to prolong the cycle of war.

Finally we confirm that the death of our adversary does not make us happy. Never has the magazine Resistance, the informational publication organ of FARC-EP, celebrated any death.

On the contrary, we assume with discipline the thoughts of Fariano and the guidance of the staff and the National Secretariat, which clearly have always deplored violence, and instead have advocated and proposed dialogue and peace. Perhaps it was not the inspiration of the exterminated Patriotic Union: and are they not the same diverse, pluralistic, democratic, pacifist features of the Bolivarian Movement for a New Colombia?

We call on the national and international community not to be fooled easily with the siren songs that have been proclaimed by President J. M. Santos from New York and his minions from newspapers and microphones in Colombia.

On the contrary, it is not by the route of extermination will Colombia find peace and reconciliation. At the appointed time, the Secretariat will have to communicate the reality of what happened in the jungles of southern Colombia. Therefore, we do not add anything about these events. Meanwhile, honor and glory covers us to keep fighting and resisting up until reaching a New Colombia, in peace with justice and democracy.