There are no exceptions, just varying degrees of cruelty, callousness, the social chaos our societies are becoming day by day, week by week, year by year as we see what our forefathers built - decent moral behaviour and respect for the value of social contribution - slip and slide into an abyss of Armageddon in our cities and on our streets.

Russia is no exception. Only this week some demented freak murdered and ate his own grandmother when she was still alive, too mad to work but not too mad to commit an act of utter, raw and sheer evil. And before anyone goes casting stones, let us turn to the other side of Europe, Britain. 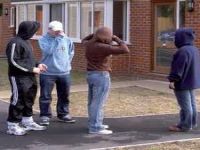 Britain, the country where a bank employee rose to fame for throwing a cat in a trash bin because it was "funny", and where some disgusting individual went into a pet shop, bought a goldfish, swallowed it and posted the video on You Tube, where a bunch of thugs dyed a cat's fur pink and threw it over a wall, where a baby was burnt to death, where a woman was stabbed in the throat walking home at night...the result of just a few days' news.

This is the country where Baby P. was tortured to death for most of his miserable existence. Just over a year old, he died with fifty horrific injuries on his body, he died with his teeth smashed down his throat and had a snapped spine. It's the country where some youths removed a drain cover in front of the door of an elderly 80-year-old lady so she would fall down it. She did, and she died.

One can almost hear them sniggering. It's the country where people are asking for drinks to be sold in plastic cups so that the glasses will not be smashed into someone's face. And no, these are not isolated incidents.

Every year there are fourteen million cases of anti-social behaviour according to Her Majesty's Chief Inspector of Constabulary, which translates into 26 every minute. Practically one every two seconds. 40 since you started reading this piece. According to the same statistics, only one quarter are reported, 32 per cent of those who did report the incidents experienced retaliation (like the 80-year-old lady) and 60 per cent were unaware of any police action being taken.

I myself, on my last visit to the UK, experienced this sick society first-hand. Walking home at ten o'clock at night after visiting a friend, some demented half-wit walking towards me crossed over the street so as to come directly into line, lunged in my direction and took a swing. What happened next is possibly the solution. It certainly was in his case.

This uncouth, ill-mannered lout was introduced into the finer niceties of Krav Maga. His arm was grabbed, locked, turned into a propelling vehicle behind him and he was projected face-first into one of those sturdy old British Victorian lamp posts, the type which had formerly seen good behaviour and decent morals in the streets below and which winked at me in the moonlight as I finished the job and hopefully destroyed the creature's reproductive facilities so it will not breed any more monsters like itself. I had the option to rearrange its face or snap its neck but thought the former might actually make it more pleasant to look at and the latter, too kind.

Yes, I did telephone the ambulance after leaving the creature in the recovery position and yes I did wait until it came. I walked on, having meted out some swift justice.

Had the boot been on the other foot, he and his friends would no doubt have kicked me to death, specially if I had been a defenceless old lady and not an in-form 220 lb. fitness fanatic. A few doors away, an incident had been reported to the police days earlier. Eight hours later, a policewoman came round on a bicycle. Where are the authorities?

So when little Kevin or Sharon stand up in class and spit at or slap their teachers, where is the authority? It has been taken away from teachers. And replaced with nothing. In the good old days, you were given the rules to read and two weeks to learn them. If you failed the test you were beaten and if you dared to complain at home, got another one for being a snitch. But you learnt the rules.

And if you broke them, you knew the consequences and yes, it would happen. So suppose we start before the child even goes to school, with parenting contracts in which those who have children sign up, underwriting their personal responsibility in the education of their child, facing all the consequences of its actions while still a minor, and how about socialising the child for the classroom from day #1?

This does not mean brutality, it means education, which is firmness, upholding the rules within a system of rewards and withdrawal of privilege depending on the behaviour. For these gangs of marauding, urinating, swearing monsters kicking in old ladies and setting fire to cats and babies for fun, the notion arises that human rights apply to those who behave like human beings.

Inside a properly functioning system, they would not last five minutes. Cost money? How to pay for it? Well, easy! Let's pretend we're bailing out a bank and suddenly three trillion dollars will materialise from thin air.