UNO: Cockroaches and Liars scatter when the light shines on them

How childish and how rude it was for the delegations of the USA and its lackeys to sidle out of the UN General Assembly today in a huff when President Mahmoud Ahmadi-Nejád of the I.R. Iran took the podium and spoke his mind. How true it is that roaches and liars both scatter when the light shines on them. 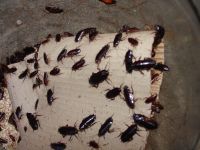 Who dropped depleted uranium weaponry in Iraq? In the Balkans? Who perpetrated the war crimes in Fallujah? Who lied to the United Nations Organization? Who tried to cajole, bully and blackmail members on the international community into getting the second resolution necessary under the UN Charter to attack Iraq? Who went ahead anyway and derided the UNO and international law?

Who slaughtered hundreds of thousands of Iraqi civilians? Who targeted civilian infra-structures so that billionaire rebuilding contracts could be handed out to White House cronies? Who started paying off Iraqi insurgent groups/freedom fighters to not attack the US coalition troops?

Who is paying the Taliban not to attack? Who has lost the initiative in Afghanistan and who is confined to barracks in Iraq? Who sends troops from a myriad of other nationalities to these countries in US uniforms? Who hides the casualty figures this way?

Who made hundreds of attempts to murder Fidel Castro? Who supported Operation Condor in Latin America? Who supported, aided and abetted fascist and repressive murderous terrorist regimes in Africa and Latin America for decades? Who spent trillions of dollars trying to sabotage the Soviet model?

Who shot down an Iranian passenger airliner over the Gulf? Who is accusing Iran of having a nuclear programme but is not asking the International Atomic Energy Agency to have a look at Israel's alleged 200 nuclear warheads? Who is playing international diplomacy with two weights and two measures?

Who blamed Iraq for 9/11? Who accused the Serbs of genocide when in fact they were defending their people against western-backed Albanian terrorists? Who supports Israel blindly when it perpetrates war crimes, massacres and steals territory daily, forcing people off their lands and building colonies, against international law?

Who funded bin Laden's Mujaheddin in Afghanistan and aided the Pakistani Madrassah to export their brand of terrorism? Whose security forces were in total disarray at the time of 9/11? Who claimed that a passenger aircraft flew into the Pentagon, when two lamp posts which would have been flattened on impact were left standing?

Why, the countries of those who so childishly walked out of the UN building today. Why didn't Dr. Ahmadi-Nejad say "There's the door, use it! And don't come back"?