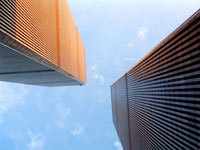 It's that time of year again. No, I don't mean Christmas. 911 came. People gathered at "ground zero" and prayed. A bell rang for every soul that was killed. A true solemn occasion.

I read a terrific article by Bonnie Mceneaney where she writes just a few stories about 9/11 "victims who foresaw their deaths" Anyone who has faced death like I have or who has lost loved ones can truly appreciate her book, "Messages" published by William Morrow.

Then, of course we have those 911 conspiracy stories. I have noticed they give more detail but exclude many facts. For instance.

The 1993 attack on the World Trade Center proves they were targeted by Islamic terrorists on 911 once again. Hundreds of planned attacks on American streets, cities and shopping Malls were stopped by the US police since the Towers fell. It was all reported in the news.

What? No one heard about it or researched it??? The American media usually kept it a low profile, except last time when it happened in Time Square not too long ago. All by Islamic terrorists.

I know we cannot trust all the media. Follow the money trail and read history.The following is funny for the hard working, down to earth, God fearing people. It will irritate the obtuse who need read.

Class, can anyone tell me which major country supports Israel??? U.S.A., that's right class! Now, who hates Israel the most? Islamic terrorists, yes!. Who loves conspiracy theories?? Students with nothing to do or "useful idiots" as Lenin called them or as George Soros who now pays them in his billion dollar propaganda machine. Soros hates Christian America and wants to legalize drugs there.

Calvina Fay of the Drug Free America Foundation declared billionaire George Soros to be an "extremely evil person" who wants to legalize dangerous mind-altering drugs. Fay said that Soros, an atheist who is a major funder of the Democratic Party and liberal-left causes, is "our common enemy" and that he is determined to subvert traditional values and undermine America's families. Soros heavily finances moveon.org. which is liberal, anti-Republican as well as anti-American. They write internet articles, blogs and newsletters. Soros hires protesters and funds them. As they say, "one rotten apple spoils the whole barrel". Readers and viewers picked up on it and they in turn are inspired to do the same. It gives them purpose in life.

Soros is an atheist but was born a Jew. He has spent billions upon billions to have misinformation (that means "lies" to you students out there) published on the internet, news and movies. Now class , why in the world would one man spend billions to make America look bad??? Who is not lazy to dig for the truth? Maybe 10, I think.

Research is not the computer, class! See the world! Go to New York! Talk to people. Read books. I mean more than your favorite, class. Let all the Chamberlains of the world step aside. Remember class, follow the money trail and read your history.

I was a US Marine when the Beirut bombing happened. I wish I had been sent to Lebanon.. The Islamic terrorists claimed they did it. Then Reagan told the Marines to fight them. We were not just Hispanics, Blacks and Whites. We were Marines. All Americans united in fighting evil. The media new nothing about the little war till years later.

Now we have people wanting to build a Mosque near "ground zero". Funny how the mayor agrees to it while 70% of America opposes it. I wonder who paid him off? We still cannot get permission to rebuild the Orthodox Church near "ground zero". Odd how the mosque got the green light. The Orthodox Church was there before the disaster and has more right.

A sister of a 9/11 Victim speaks out "Why is the cordoba project happening at ground zero?" The one she was talking to who favored the mosque incoherently spoke for 5 minutes. In other words, he could not answer her. You can see it on YouTube, just type in " Sister of 9-11 Victim Puts Smack Down"

I cannot believe anyone would not respect the feelings of those who mourn for their loved ones and prefer "ground zero" to be left as a memorial. Why you ask? There are still many small body parts left buried there. Construction workers verified that. We should also respect those who mourn. Don't believe me. Ask all those who lost someone on 911. Reality can be a cold slap in the face.

As for the conspiracy theorists and those who write about 911 in a bad light. I have to admit it is good fiction. Well, they need... you guessed it. A good dose of cold reality to slap them in the face.