The wisdom, knowledge and survival of humanity 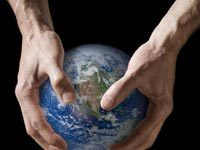 Stephen Hawking said that man should find another planet to live, because we are destroying the earth at an unprecedented speed. Coral reefs suffered the process of bleaching, entire ecosystems are threatened by environmental disasters. It was reported recently that an oil spill in Nigeria has now spread for fifty years, totaling two billion liters in that period, which makes the tragedy of the Gulf of Mexico almost a joke.

Petrobras has about half a dozen platforms at risk - the P-33 and at least four more, according to Sindipetro - and in these conditions still they still find themselves able to suck oil seven kilometers below sea level!

Again in the Gulf, another offshore platform, the company Mariner Energy, caught fire in early September. But we cannot forget the disasters of lesser proportions, but more frequent - if not continuous - which indicate the high probability of our self-destruction. And some worry about nuclear arsenals ...

All this gives reason to Hawking, but the great British physicist knows better than us the obstacles for humanity to move from "home." How many people could go, for example, to the newly discovered planetary system HD 10180, with perhaps seven planets, which is 127 light years from Earth?

A ship traveling at 98% speed of light would take more than 130 years to get there, and the most basic physics teaches that mass increases with speed, and we only do not feel it because flying at nearly a thousand kilometers per hour in a commercial jet is nothing compared to three hundred thousand kilometers / second at which light travels.

But let us make an exception to the impossible, in an outburst of the most fertile imagination, and believe it lets us take a short cut in space-time through a quantum madness and we manage to arrive at planet three of HD 10180

We shall take into account the high alert of Professor Hawking, to beware of a possible encounters with aliens.

But ... now every intellectual being generated through sexual reproduction will tend to form their personality precisely the same way as we do: influenced by parents, siblings, and of course the circumstances, the external environment.

Perhaps the aliens should surround themselves with care in case they happen to bump into some earthling ...

No, the degeneration of the Earth will not be able to wipe out nearly seven billion people, the more probable thing is that some catastrophe will apply a brake on these kind of arrangements, substantially reducing the number of these so-called thinking animals.

The Theory of the Evolution of the Species provides the ability to adapt, even at the cost of hard lessons for humanity.

But it is costly and even painful to acquire knowledge or wisdom.

Knowledge reveals causes, wisdom requires weighing the consequences. It follows that the first one exceeds mankind so much that it also misses the second.