The aftermath of Iraqi massacre

The war in Iraq began on March 20, 2003. Former US President George Bush sent troops there under the pretext that the Iraqi leader Saddam Hussein was developing weapons of mass destruction. But the UN inspectors did not find them there.

Nevertheless, despite the international law and opinion of the majority of the UN Security Council, hostilities were initiated. 49 countries have responded to Bush's call to "liberate Iraq from tyranny." The goal of overthrowing Saddam Hussein's regime was reached quickly - in April of 2003. The former Iraqi president had been caught, the trial was held, and as a result he was given a death sentence. On December 30, 2006, he was executed. But this has not brought peace to Iraqi land. 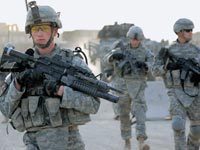 The country was engulfed by bloody chaos. Reports of attacks in Iraq became a regular thing. According to various sources, over the seven years of war, 100 thousand to a million of civilians have perished. The contradictions between the major ethno-religious groups inhabiting Iraq - Shia Arabs, Sunni Arabs and Kurds - have intensified dramatically. The country was virtually in the midst of a civil war.

The massacre has left its mark on the U.S. as well. According to the official data, 4,421 U.S. soldiers and approximately a thousand civilians were killed in Iraq over seven years. Other countries lost another 300 officers. The number of U.S. troops reached 170 thousand, but they could not bring peace to Iraq for a long time.

The Americans themselves were often characterized by extreme cruelty against the civilian population of Iraq. The prison of Abu Ghraib has become the symbol of torture of the Iraqis. The Administration of the United States often had to blush for its military who did not hesitate to videotape the torture of the Iraqis.
The war with no prospect of victory has gradually become one of the major stimuli to the American public. In many ways the enormous losses in Iraq have made Bush's rankings fall. At the elections in 2008, Barack Obama celebrated his victory. One of his pre-election promises was the withdrawal of the American troops from the Middle Eastern country.

The new American president began to gradually reduce the number of U.S. troops in this country. Over eighteen months he had sent home 90,000 soldiers and officers. Late last year the U.S. has entered into an agreement with the Iraqi government stipulating that the last American soldier will leave Iraq before the end of 2011, and that combat troops would leave in August of 2010.

Interestingly, American politicians are convinced that this withdrawal will damage the interests of the United States. The set goals have been fully achieved and Hussein's regime has been overthrown.
However, can we talk about the end of the war? Sergey Demidenko, an expert of the Institute of Strategic Assessments and Analysis believes that the Iraq war cannot be considered complete.

"First of all, the withdrawal of troops was only partial. At least in Iraq there are still 56,000 U.S. troops who are engaged in the protection of strategically important facilities, training of Iraqi security forces and carrying out logistical functions.

There is no appeasement of Iraq in sight. The situation there is very, very difficult. The country has not united. It is split on ethnic and religious grounds. Kurds are living completely independent from the Iraqi Arabs. They have all the attributes of statehood, including the armed forces. Only the Constitution is missing.

As for the Arabs, the situation is sad. There is still no peace between Shiites and Sunnis. There is only a relative calm, interrupted by regular attacks which kill hundreds of people every month. Their leaders have divided spheres of influence in the country, including income from oil, conditionally, through the American mediation.

But once the Americans finally leave Iraq, there will be a vacuum. A new redistribution of property, as well as control channels of arms smuggling and drug trafficking will start. There will be many of those willing to avenge for the last years of confrontation.

One of the causes of the illusions about the pacification of Iraq is the reduction of the number of casualties in the U.S. military. This is explained by the fact that they have virtually ceased to participate in combat operations, shifting them to the shoulders of the so-called Iraqi Army. However, it is largely a phantom. As a combat unit, it has little meaning. After the Americans leave, the Lebanese scenario can be expected. That is, it will break apart the Shiite and Sunni groups, who will immediately start fierce struggle."